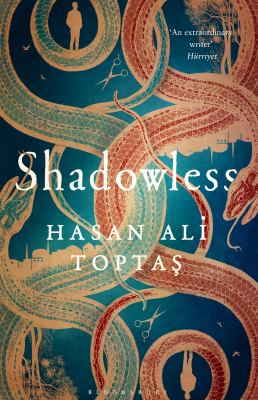 From translated writing, science fiction and contemporary fiction, the variety of readers feedback is from across the fiction spectrum. This month it’s the new and classic titles that have the eyes of literary browsers. As with all reading experiences they are unique to the reader.

The Readers’ Choice selections are books nominated by people who want to pass on their reading experience to the library community. These selections are highlighted with Reader’s Choice stickers so that others can find great reading material. You can find slips for Reader’s Choice reviews in new books, or ask staff for one if you have a review or recommendation to embellish the library collection.

Shadowless / Hasan Ali Toptaş ; translated from the Turkish by Maureen Freely and John Angliss.
“In an Anatolian village forgotten by both God and the government, the muhtar has been elected leader for the sixteenth successive year. When he staggers to bed that night, drunk on raki and his own well-deserved success, the village is prosperous. But when he is woken by his wife the next evening he discovers that Nuri, the barber, has disappeared without a trace in the dead of night, and the community begins to fracture. Blurring the lines of reality to terrific effect, Shadowless is both a compelling mystery and an enduring evocation of displacement from one of the finest, most exciting voices in Turkish literature today.” (Syndetics summary)

“I thought this book would be better as a short story. There were some good observations but as a novel it didn’t hold my attention”⭐⭐⭐(3/5 stars)

Josh and Hazel’s guide to not dating / Christina Lauren.
“Most men can’t handle Hazel. But her best friend Josh isn’t most men. Josh has known Hazel since college, where her zany playfulness proved completely incompatible with his mellow restraint. Josh has always thought of Hazel more as a spectacle than a peer. But now, ten years later, after a cheating girlfriend has turned his life upside down, going out with Hazel is a breath of fresh air. Not that Josh and Hazel date. At least, not each other. Because setting each other up on progressively terrible double blind dates means there’s nothing between them…right?” (Syndetics summary)

Elefant / Martin Suter ; translated from the German by Jamie Bulloch.
“What would you do if you woke up to see a living, breathing, tiny, glowing, pink elephant? If you’re anything like Schoch, who lives on the streets of Zürich and is decidedly down on his luck, you might well think it’s time to put away the bottle before your hallucinations get any stranger, and go back to sleep. But what if the tiny pink elephant is still there when you wake up? And clearly needs someone to take care of it? And what if you discover that it’s been created through genetic engineering, by a group of scientists who just want to use it to get rich and don’t care about the elephant’s welfare? And that they’re in cahoots with a circus and will stop at nothing to get it back? What if this little elephant is about to change your life?” (Syndetics summary)

“Ingenious. The humans involved are some of them rather tedious. But the central figure does develop excellently” ⭐⭐⭐(3/5 stars)

The winter soldier / Daniel Mason.
“Lucius is a twenty-two-year-old medical student when World War One explodes across Europe. From the gilded ballrooms of Imperial Vienna to the frozen forests of the Eastern Front; from hardscrabble operating rooms to battlefields thundering with Cossack cavalry, The Winter Soldier is the story of war and medicine, of family, of finding love in the sweeping tides of history, and, finally, of the mistakes we make, and the precious opportunities to atone.” (Syndetics summary)

“This was a superb read from start to finish. Austrian med student in remote E European field hospital in WWI. Doesn’t sound promising? Believe me this will be winning Oscars in the Hollywood version in a few years. Riveting.” ⭐⭐⭐⭐(4/5 stars)

Strangers with the same dream / Alison Pick.
“‘We came into their valley at dawn.’ So begins this taut roller-coaster of a novel. From three vastly different points of view, Alison Pick relates the same vivid and riveting story of one transformative year. That year is 1921, and a band of young Jewish pioneers, many escaping violent homelands, have set out to realize a utopian dream–the founding of a kibbutz–on a patch of land that will later become Israel. Writing with a tightly controlled intensity, Alison Pick takes us inside the very different minds of her three key characters–two young unmarried women, escaping peril in Russia and Europe; and one slightly older man, a group leader who is married with two children–to depict how idealism quickly tumbles into pragmatism, and how the utopian dream is punctured by messy human entanglements.” (Syndetics summary)

“I thought this book was cleverly written about the beginning of something that continues to challenge international relations. A triptych that reminds that there is always multiple versions of history and the truth” ⭐⭐⭐⭐⭐ (5/5 stars)

The fortress / S.A. Jones.
“The Fortress asks questions about consent, power, love and fulfilment, and is absorbing, explicit, confronting and moving. Jonathon Bridge has the corner office, the tailored suits and the impeccable pedigree. He has a fascinating wife, a child on the way and a string of nubile lovers on the side. His world is our world: the same chaos and sprawl, haves and have-nots, men and women, skyscrapers and billboards. But it also exists alongside a vast, self-sustaining city-state called The Fortress where the indigenous inhabitants — the Vaik — continue to live much as they have always done. The Vaik is an all-female civilisation where Johnathon will have to live as a supplicant for a year.” (Syndetics summary)

“I thought I didn’t like fantasy as a genre but it turns out I wasn’t the target audience. It was an immensely satisfying read to the end. Fantasy is usually overly populated with books targeted at white cis men!” ⭐⭐⭐⭐ (4/5 stars)

Phone / Will Self.Phone
“Meet Jonathan De’Ath, aka ‘the Butcher’. The curious thing about the Butcher is that everyone who knows him – his washed-up old university lecturer father, his jumbling-bumbling mother, his hippy-dippy brothers, his so-called friends, his spooky colleagues and his multitudinous lovers – they all apply this epithet to him quite independently, each in ignorance of the others. He knows everyone calls him ‘the Butcher’ behind his back, but he also knows that they don’t know the only real secret he maintains, encrypted in the databanks of his steely mind- Colonel Gawain Thomas, husband, father, highly-trained tank commander – is Jonathan De’Ath’s longtime lover.” (Syndetics summary)

“Interesting in parts, but needs a good editor. I enjoyed his earlier works, which had black humour, sadly lacking in this latest trilogy” ⭐⭐(2/5 stars)

So long, and thanks for all the fish : volume four in the trilogy of five / Douglas Adams ; foreword by Neil Gaiman.
“Thirty years of celebrating the comic genius of Douglas Adams… There is a knack to flying. The knack lies in learning how to throw yourself at the ground and miss. It’s not an easy thing to do and Arthur Dent thinks he’s the only human who’s been able to master this nifty little trick – until he meets Fenchurch, the girl of his dreams. Fenchurch knows how the world could be made a good and happy place. Unfortunately she’s forgotten. Convinced that the secret lies within God’s Final Message to His Creation they go in search of it. And – in a dramatic break with tradition – actually find it… Volume four in the trilogy of five” (Syndetics summary)

“I enjoyed it when I first read it in the ’80’s but less so this time. The basic concept of uplifted dolphins seems sillier now. However it is written well and is a classic, so it will appeal to some” ⭐⭐⭐ (3/5 stars)