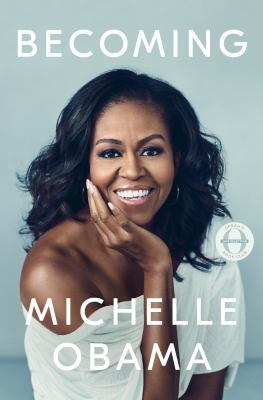 November is a big month in the world of biography! The reason? It’s the launch of Michelle Obama’s highly anticipated memoir, Becoming. Becoming covers everything from childhood to work to politics–as well as more recent goings-on at the White House. And while Obama is currently on a stadium-sized book tour in the US, you can get a sneak preview of your own by checking out a sample chapter in the Guardian (and don’t forget to have a browse of our other great new biographies, too!).

Becoming: a memoir / Michelle Obama
“In her memoir, Michelle Obama invites readers into her world, chronicling the experiences that have shaped her–from her childhood on the South Side of Chicago to her years as an executive balancing the demands of motherhood and work, to her time spent at the world’s most famous address. With unerring honesty and lively wit, she describes her triumphs and her disappointments, both public and private, telling her full story as she has lived it.” (Adapted from the Syndetics summary.)

Inheritance: a memoir of genealogy, paternity, and love / Dani Shapiro
“In the spring of 2016, through a genealogy website to which she had submitted her DNA for analysis, Dani Shapiro received the news that her father was not her biological father. She woke up one morning and her entire history–the life she had lived–crumbled beneath her. Inheritance is a book about secrets–secrets within families, kept out of shame or self-protectiveness; secrets we keep from one another in the name of love.” (Adapted from the Syndetics summary.)

In pieces: a memoir / Sally Field
“In this intimate, haunting literary memoir, an American icon tells her own story for the first time–about a challenging and lonely childhood, the craft that helped her find her voice and a powerful emotional legacy that shaped her journey as a daughter and a mother. Powerful and unforgettable, In Pieces is an inspiring and important account of life as a woman in the second half of the twentieth century.” (Adapted from the Syndetics summary.)

Small fry / Lisa Brennan-Jobs
“Small Fry is Lisa Brennan-Jobs’s poignant story of a childhood spent between two imperfect but extraordinary homes. Scrappy, wise and funny, young Lisa is an unforgettable guide through her parents’ fascinating and disparate worlds. Part portrait of a complex family, part love letter to California in the seventies and eighties, Small Fry is an enthralling book by an insightful new literary voice.” (Adapted from the Syndetics summary.)

Mad, bad, dangerous to know: the fathers of Wilde, Yeats, and Joyce / Colm Tóibín
“From Colm Tóibín comes an intimate study of Irish history and literature told through the lives and work of three men–William Wilde, John Butler Yeats and John Stanislaus Joyce–and the relationships they had with their sons. Tóibín recounts the resistance to English cultural domination, the birth of modern Irish cultural identity and the extraordinary contributions of these complex and masterful authors.” (Adapted from the Syndetics summary.)

Heavy: an American memoir / Kiese Laymon
“In this powerful and provocative memoir, genre-bending essayist and novelist Kiese Laymon explores what the weight of a lifetime of secrets, lies and deception does to a black body, a black family and a nation teetering on the brink of moral collapse.” (Adapted from the Syndetics summary.)

Brutally honest / Melanie Brown
“As one-fifth of the iconic Spice Girls and judge on X Factor and America’s Got Talent, Melanie Brown, a.k.a Scary Spice, has been an international star since her twenties. Brutally Honest is an exposé of the struggles and acute pain that lay behind the glamour and success.” (Adapted from the Syndetics summary.)