Stan Lee, co-creator of some of the most famous super heroes ever: including Spider-man, The Hulk, The X-men, The Fantastic Four, Thor and the Black Panther died yesterday (12th November 2018). It is no exaggeration to say that the comic creations he helped bring to life changed the global entertainment world profoundly. Some of those characters have permeated just about every aspect of world culture. His larger than life public persona often appeared as cameos in Marvel Universe films.

He will be greatly missed but there is no doubt those creations he helped to form will go on.

Amazing fantastic incredible : a marvelous memoir / Stan Lee and Peter David and Colleen Doran.
“In this gorgeously illustrated, full-color graphic memoir, Stan Lee–comic book legend and cocreator of Spider-Man, the X-Men, the Avengers, the Incredible Hulk, and a legion of other Marvel superheroes–shares his iconic legacy and the story of how modern comics came to be.” (Adapted from Syndetics summary)

Spider-Man 2099 [6] : Apocalypse soon / Peter David, writer ; Will Sliney, artist.
“Spider-Man 2099 has learned the location of the headquarters of the Fist – the extremist anti-government offshoot of the Hand that put his fianc’e in a coma – and he’s ready to mount his attack! But it turns out that he’s not the only one investigating the radical group. Elektra Natchios, Marvel’s most deadly assassin, has her own reasons for hunting these terrorists. Can Miguel trust this mysterious newcomer, or is she yet another obstacle in his quest for vengeance?  (Adapted from Syndetics summary) 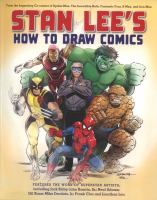 Stan Lee’s How to draw comics : from the legendary creator of Spider-Man, the Incredible Hulk, Fantastic Four, X-Men, and Iron Man / Stan Lee.
Contents of this book include: A brief history of comic books . . . by a guy who lived them! — Tools of the trade — Form, perspective & foreshortening — The human head — Amazing anatomy, action & acting — Characters & costumes — Bring on the backgrounds — The life behind the layouts — Peerless penciling — Imaginative inking — Lively lettering — Crafting the color — Commanding covers — and Creating the comic book.