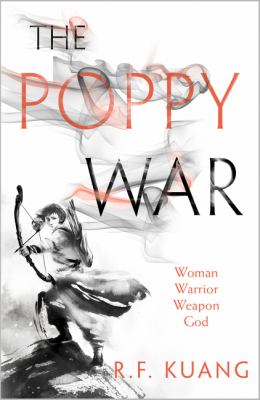 “I have never listened to anyone who criticized my taste in space travel, sideshows or gorillas. When this occurs, I pack up my dinosaurs and leave the room.” -Ray Bradbury, Zen in the Art of Writing.

This month’s science fiction showcased books have a wide appeal and feature many of the tropes and genres of the sci-fi world. From Kim Stanley Robinson’s Red Moon to Ilona Andrew’s Magic Triumphs, from Raymond E Feist’s King of Ashes to Ben Bova’s Power Failure, there is a whole universe of book choices to enjoy.

Power failure / Ben Bova.
“Dr. Jake Ross came to Washington to try to make a difference, but he’s learned the only way to get something done in Washington, assuming your ideals survive the corrosive atmosphere, is to gather power. Ross has gathered a great deal, riding in the wake of Frank Tomlinson. But now Tomlinson has decided to shoot for the moon. If they win, they get it all. If they lose, the game is over for Jake Ross. In the Power trilogy, Bova’s vision of a future powered by solar satellite transmission is tantalizingly within reach.” (Adapted from Syndetics summary)

Magic triumphs / Andrews, Ilona
“Kate has come a long way from her origins as a loner taking care of paranormal problems in post-shift Atlanta. She’s made friends and enemies. She’s found love and started a family with Curran Lennart, the former Beast Lord. But her magic is too strong for the power players of the world to let her be. Kate and her father, Roland, currently have an uneasy truce, but when he starts testing her defenses again, she knows that sooner or later, a confrontation is inevitable.” (Adapted from Catalogue)

Chasing shadows : visions of our coming transparent world
“David Brin, Hugo award-winning author of The Uplift War, presents Chasing Shadows, a collection of short stories and essays by other science fiction luminaries. As we debate Internet privacy, revenge porn, the NSA, and Edward Snowden, cameras get smaller, faster, and more numerous. Has Orwell’s Big Brother finally come to pass? Or have we become a global society of thousands of Little Brothers – watching, judging, and reporting on one another? Partnering with the Arthur C. Clarke Center for Human Imagination, and inspired by Brin’s nonfiction book The Transparent Society, noted author and futurist David Brin and scholar Stephen Potts have compiled essays and short stories from writers such as Robert J. Sawyer, James Morrow, William Gibson, Damon Knight, Jack McDevitt, and many others to examine the benefits and pitfalls of technologic transparency in all its permutations.” (Adapted from Catalogue)

King of ashes / Feist, Raymond E.
“For centuries, the five greatest kingdoms of North and South Tembria, twin continents on the world of Garn, have coexisted in peace. But the balance of power is destroyed when four of the kingdoms violate an ancient covenant and betray the fifth: Ithrace, the Kingdom of Flames, ruled by Steveren Langene, known as ‘the Firemane’ for his brilliant red hair. As war engulfs the world, Ithrace is destroyed and the Greater Realms of Tembria are thrust into a dangerous struggle for supremacy.” (Adapted from Catalogue)

Shiang / C. F. Iggulden.
“In Shiang, the young king rules without dissent. Mazer swordsmen stand watch on every corner, looking for the first sign of rebellion. This city is a place of quiet and slow dignity, like a man eating rice with a razor pressed against his throat. Yet with one sharp movement, order is overturned. The balance of centuries is undone in the sudden spill of blood – and in the darkness, something terrible returns to Shiang.” (Adapted from Syndetics summary)

The poppy war / R.F. Kuang.
“When Rin aced the Keju – the Empire-wide test to find the most talented youth to learn at the Academies – it was a shock to everyone: to the test officials, who couldn’t believe a war orphan from Rooster Province could pass without cheating; to Rin’s guardians, who believed they’d finally be able to marry her off and further their criminal enterprise; and to Rin herself, who realized she was finally free of the servitude and despair that had made up her daily existence. That she got into Sinegard, the most elite military school in Nikan, was even more surprising. But surprises aren’t always good.” (Adapted from Syndetics summary)

Red moon / Kim Stanley Robinson.
“It is thirty years from now, and we have colonized the moon.
American Fred Fredericks is making his first trip, his purpose to install a communications system for China’s Lunar Science Foundation. But hours after his arrival he witnesses a murder and is forced into hiding. It is also the first visit for celebrity travel reporter Ta Shu. He has contacts and influence, but he too will find that the moon can be a perilous place for any traveler.” (Adapted from Syndetics summary)

Uncompromising Honor / David Weber.
“The Solarian League’s navy counts its superdreadnoughts by the thousands. Not even its own government knows how enormous its economy truly is. And for hundreds of years, the League has borne the banner of human civilization, been the ideal to which humanity aspires in its diaspora across the galaxy. But the bureaucrats known as the Mandarins who rule today’s League, are not the men and women who founded it so long ago. They are corrupt, venal, accountable to no one… and they’ve decided the upstart Star Kingdom of Manticore must be destroyed.” (Adapted from Syndetics summary)

The Ember Blade : book one of the Darkwater legacy / Chris Wooding.
“Empires rise, civilisations fall and one culture comes to subsume another. It’s the way of the world… sometimes ways of life are improved, sometimes they are not. But the progression of change is huge and – usually – unstoppable. In this story, the Ossian way of life is fading and the Dachen way is taking its place and Aren is comfortable with that. Even when his parents are accused of treason he supports the establishment and maintains there’s been some mistake… which is all it takes to get himself and his best friend arrested.” (Adapted from Syndetics summary)