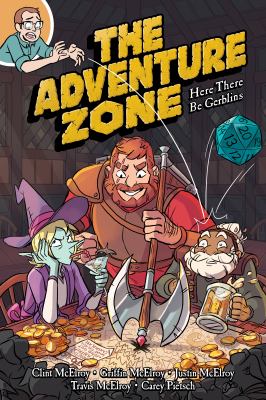 Comic book titles hitting the library shelves this month feature award winners, best sellers, classics, antiheroes and more. Classics by Pearl S Buck, Octavia E Butler and Karl Marx have been transformed into visual narratives. Kindred has won awards and recognition in the form an Eisner award, and a Bram Stoker award. Maybe illustrator John Jennings’ colour samplings from bruises and blood had some influence there! This powerful adaptation is worth looking through, and if it’s the first taste you have of Octavia Butler’s work, lucky you! She is a fearless, insightful writer whose work deals with gender, race, age and class. Crime author Denise Mina, a recent Wellington visitor, is the writer for the latest John Constantine, Hellblazer.

The McElroy brothers playing Dungeons & Dragons with their dad is a different type of adaptation altogether. The Adventure Zone is a comic based on the podcast of the same name. Their fantasy characters are complete with ‘loafers of leaping and sprinting’ and proficiencies in wolf training and tea making. The graphic novel instantly became a New York Times trade paperback bestseller on release in August 2018.

Moon Knight [1] : crazy runs in the family / Bemis, Max
“Moon Knight has always been a protector from the shadows, but this new enemy is set to extinguish those shadows with blinding light and fire. Get ready for the introduction of Moon Knight’s greatest nemesis! But as the path of the Sun King brings him ever closer to Moon Knight, Marc has problems of his own: A man known as the Truth is driving people to suicide! Things get worse when Sun King and Bushman hit Marc where it hurts the most, and Jake Lockley’s dark secret is revealed! Will Moon Knight finally be eclipsed?” (Catalogue)

The good earth / Bertozzi, Nick
“Although more than eighty years have passed since Pearl S. Buck’s The Good Earth won the Pulitzer Prize, it has retained its popularity and become one of the great modern classics. This indelible portrait of China in the 1920s, when the last emperor reigned and the vast political and social upheavals of the twentieth century were but distant rumblings, tells the moving story of honest farmer Wang Lung and his selfless wife O-Lan. Bertozzi retraces the whole cycle of life depicted in Buck’s original novel: its terrors, its passions, its ambitions, and its rewards.” (Catalogue)

Kindred : a graphic novel adaptation / Duffy, Damian
“This searing graphic-novel adaptation of Octavia E. Butler’s science fiction classic is a powerfully moving, unflinching look at the violent, disturbing effects of slavery on the people it chained together, both black and white – and made kindred in the deepest sense of the word. Home is a new house with a loving husband in 1970s California that is suddenly transformed into the frightening world of the antebellum South. Dana, a young black writer, can’t explain how she is transported across time and space to a plantation in Maryland.” (Adapted from Catalogue)

The Communist Manifesto / Rowson, Martin
“A graphic novel adaptation of Karl Marx and Friedrich Engels’s revolutionary pamphlet on the 200th anniversary of Marx’s birth, published in 1848. Karl Marx and Friedrich Engels’s Manifesto for the Communist Party was at once a powerful critique of capitalism and a radical call to arms. Much of what it proposed continues to be at the heart of political debate into the 21st century. It is no surprise, perhaps, that The Communist Manifesto (as it was later renamed) is the second bestselling book of all time, surpassed only by the Bible.” (Catalogue)

The Adventure Zone : here there be gerblins / McElroy, Clint
“Join Taako the elf wizard, Merle the dwarf cleric, and Magnus the human warrior for an adventure they are poorly equipped to handle AT BEST, guided (“guided”) by their snarky DM, in a graphic novel that, like the smash-hit podcast it’s based on, will tickle your funny bone, tug your heartstrings, and probably pants you if you give it half a chance.” (Catalogue)

John Constantine, Hellblazer. 19, Red right hand / Mina, Denise
“Constantine discovers he’s cursed with empathy for his fellow man as the multi-layered tale races forward. Seeking the origin of the Empathy curse, Constantine and Chris roll into Glasgow in search of Steve Evans, a “massively powerful magician” who is waiting for Constantine. Meanwhile John finds out that there has been a connection between himself and Chris before they even met. Written by award-winning crime novelist Denise Mina. Collects issues #216-229.” (Adapted from Catalogue)

Made men : getting the gang back together / Tobin, Paul
“When Jutte Shelley and her squad are gunned down in an ambush, it looks like the end for the Detroit police officers, but Jutte comes from a very storied family… named Frankenstein. Using the secrets of her ancestors, Jutte enters the family business of resurrection, bringing her squad back from the dead. Sort of. As long as you don’t look too close. Eager for revenge, they’ve no choice but to team with the Detroit mob, using them for the resources to find the lowlifes who did them in, now that Jutte has quite literally gotten the gang back together.” (Catalogue) 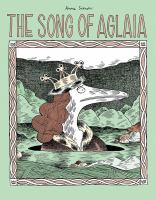 The song of Aglaia / Simon, Anne
French illustrator Anne Simon, known for her biographies of Freud, Marx and Einstein, delves into whimsy and other worldliness. “Aglaia is a simple sea nymph. One day, a Merman seduces Aglaia, forever altering her life’s course. She is cast out of Oceanid by her chauvinistic father, forcing her to wander many days and nights, until one day she finds herself at the benefit of one Mr. Kite, whose traveling circus welcomes her (including the star attraction, a waltzing Horse named Henry) and once again alters her fate, sending her down many more unexpected paths.” (Catalogue)