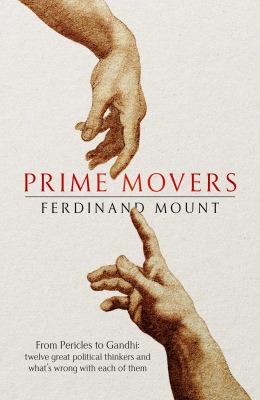 A very interesting mix of books this month, including one on Adam Smith, an MI6 spy inside al-Qaeda and ‘The perfectionists : how precision engineers created the modern world’.

Prime movers : from Pericles to Gandhi : twelve great political thinkers and what’s wrong with each of them / Mount, Ferdinand
“The lives of men such as Jesus Christ, Rousseau, Adam Smith, Edmund Burke , and Thomas Jefferson are discussed and comparisons are drawn between the various approaches each figure promoted in their works – whether philosophical, or political theories.” (Syndetics summary, adapted)

Text, lies and cataloging : ethical treatment of deceptive works in the library / Brubaker, Jana
“The library profession values objectivity and accuracy, qualities that can be difficult to reconcile when a work is controversial. This book addresses ethical considerations, particularly for cataloguers, and proposes cataloguing solutions. The approaches suggested are provocative and designed to spark debate. … Deceptive literary works mislead readers and present librarians with a dilemma. Whether making recommendations to patrons or creating catalog records, objectivity and accuracy are crucial–and can be difficult to reconcile when a book’s authorship or veracity is in doubt… (Catalogue (adapted))

Internet celebrity : understanding fame online / Abidin, Crystal
“…The face of internet celebrity is rapidly diversifying and evolving. Online and mainstream celebrity culture are now weaving together, such that breakout stars from one-hit viral videos are able to turn their transient fame into a full-time career. This book presents a framework for thinking about the different forms of internet celebrity that have emerged over the last decade, taking examples from the Global North and South, to consolidate key ideas about cultures of online fame…” (Catalogue (adapted))

Nine lives : my time as MI6’s top spy inside al-Qaeda / Dean, Aimen
“A compelling and invaluable account of life inside al-Qaeda through the eyes of a first-rate spy. As one of al-Qaeda’s most respected scholars and bomb-makers, Aimen Dean rubbed shoulders with the mastermind of the 9/11 attacks and swore allegiance to Osama bin Laden himself. His job was already one of the most dangerous in the world. But what the others didn’t know was that he was working undercover for MI6. This is the story of a young Muslim determined to defend his faith, even if it meant dying for the cause, the terrible disillusionment that followed when he realised he was fighting on the wrong side, and the fateful decision to work undercover with his sworn enemy.” (Catalogue (adapted))

Rethinking school : how to take charge of your child’s education / Bauer, Susan Wise
“With boldness, experience, and humor, Susan Wise Bauer turns conventional wisdom on its head. When a serious problem arises at school, the fault is more likely to lie with the school, or the educational system itself, than with the child. In five illuminating sections, Bauer teaches parents how to flex the K-12 system, rather than the child. As the author of the classic book on home-schooling, The Well-Trained Mind, Bauer knows how children learn and how schools work. Her advice here is comprehensive and anecdotal, including material drawn from experience with her own four children and more than twenty years of educational consulting and university teaching.” (Catalogue (adapted))

Politics for the new dark age : staying positive amidst disorder / Skews, Anthony
“Our societies are growing more unequal, more hierarchical, meaner and less human every year. Voters appalled by the direction of current politics respond to leaders that articulate a cohesive and genuine progressivism. This book provides the framework for politicians and activists to deliver that vision, organised around the themes of cooperative solutions to social problem-solving and a social contract centered on rights and the equal dignity of all people.” (Catalogue)

The perfectionists : how precision engineers created the modern world / Winchester, Simon
“New York Times best-selling Winchester charts the development of technology from the Industrial Age to the Digital Age with an eye to a single factor: precision. Standards of measurement, machines that made machines, the Hadron Collider-all have required and engendered ever greater precision. But are we missing the importance of craft and art and the messy reality of the world? (Catalogue (adapted))

Authentocrats : culture, politics and the new seriousness / Kennedy, Joe
“Authentocrats critiques the manner in which post-liberal ideas have been mobilised underhandedly by centrist politicians who, at least notionally, are hostile to the likes of Donald Trump and UKIP. It examines the forms this populism of the centre has taken in the United Kingdom and situates the moderate withdrawal from liberalism within a story which begins in the early 1990s. In this book, we see how this spurious concern for “real people” is part of a broader turn within British culture by which the mainstream withdraws from the openness of the Nineties under the bad-faith supposition that there’s nowhere to go but backwards. Authentocrats charges liberals themselves with fuelling the post-liberal turn, and asks where the space might be found for an alternative.” (Catalogue (adapted))

Fair shot : rethinking inequality and how we earn / Hughes, Chris
“To help people who are struggling, Hughes proposes a simple, bold solution: a guaranteed income for working people, including unpaid caregivers and students, paid for by the one percent. Hughes believes that a guaranteed income is the most powerful tool we have to combat poverty.” (Book jacket)

Adam Smith : what he thought, and why it matters / Norman, Jesse
“This book is not only a biography. It dispels the myths and debunks the caricatures that have grown up around Adam Smith. It explores Smith’s ideas in detail, from ethics to law to economics and government, and the impact of those ideas on thinkers as diverse as Karl Marx, Charles Darwin, John Maynard Keynes and Friedrich Hayek. At a time when economics and politics are ever more polarized between left and right, this book, by offering a Smithian analysis of contemporary markets, predatory capitalism and the 2008 financial crash, returns us to first principles and shows how the lost centre of modern public debate can be recreated.” (Catalogue (adapted))

Invisible countries : journeys to the edge of nationhood / Keating, Joshua
“What is a country? While certain basic criteria–borders, a government, and recognition from other countries–seem obvious, journalist Joshua Keating’s book explores exceptions to these rules, including self-proclaimed countries such as Abkhazia, Kurdistan, and Somaliland, a Mohawk reservation straddling the U.S.-Canada border, and an island nation whose very existence is threatened by climate change. Through stories about these would-be countries’ efforts at self-determination, as well as their respective challenges, Keating shows that there is no universal legal authority determining what a country is. He argues that although our current world map appears fairly static, economic, cultural, and environmental forces in the places he describes may spark change.” (Catalogue)