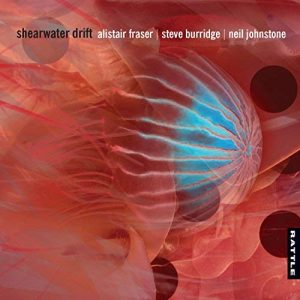 Some new Staff Pick CDs, of new releases and older material. We hope you find something to enjoy! Bon voyage.
The French alt-pop artist’s second album, coming six years after her great debut, is a challenging and rewarding listen. To imagine putting classic French pop, exotica and psych rock into a blender may give some idea of the fertile ideas behind these songs. Driven by standard drums, bass and guitars, the songs evolve and mutate minute by minute, some morphing from what could be a Francoise Hardy pop song, through classic exotica, laden with flutes and strings, to end up as an indie rock out. Somehow it all works in a beguiling and strangely immersive way and fans of imaginative psych pop should be intrigued. (John) Alterum.
Born and raised in Scottish island North Uist, Gaelic singer Julie Fowlis has well established herself as a leading artist of its kind, and this alluring fifth album would give her international fame. The project began to explore Gaelic songs of the ‘otherworld’ or supernatural and it grew to the idea of reaching out to other world while celebrating her own culture. This album features a couple of English language songs for the first time which sit nicely among Gaelic songs, and everything – the well thought out arrangements, the excellent performance by the band, and above all, her gentle yet effective voice and modern interpretation – hit the right note. Although rooted heavily in tradition, her music has a universal charm, and this album should appeal to a wider audience. (Shinji) No sounds are out of bounds / The Orb.
Thirty years after their debut, UK electronic chillout stalwarts The Orb, throw a real curveball by releasing an album on Cooking Vinyl featuring a host of guest artists that works so well it’s hard to believe it’s the same band that made 2016’s ambient “Chill Out World”. The driving dub bass lines that propel each track are the only constants over a record that touches so many bases, including female vocalists, dub melodica, ambient piano, house beats, mellow grooves and jazz guitar, all peppered with The Orb’s distinctive humorous vocal samples. It’s a wild ride and, against all odds, is arguably the most commercially accessible and one of the best releases of their long and befuddling career. (John) A deeper understanding / The War on Drugs.
I absolutely love this album. I didn’t know The War on Drugs and came by them from a various best of 2017 cd. “In chains” and “Pain” are highlights but each song has its own interest. Not in any way innovative or surprising but the songs are full and lush and sometimes long, but are complete. Someone called it Dad rock, but who cares, I’m a dad and it is just lovely. (Martin)

I’m all ears.
The second album by the UK teenage duo is receiving rave reviews worldwide and rightly so. That two 19 year old girls making music for teenagers about being a teenager can have appeal across all age groups is remarkable and this is due to the standard of the song writing, the great instrumentation and the original and creative arrangements. Their vocals can take a bit of getting used to – think early Kate Bush – but, once you are tuned in, the journey through their bold and intense contemporary pop is hard to resist. (John) We light fire.
I recently went to see Julia Dean’s album release and loved it! She was amazing! I highly recommend her album – a must listen! (Lisa) Weather diaries.
Remarkably, almost 30 years on the early ‘90’s UK shoegaze sound appears to be in fine form and, following the excellent recent new release from Slowdive, we now have the first new Ride album in 20 years and, yes, it’s pretty good. Come back albums are challenging when you helped create an entire musical sub-genre, however, Ride fare pretty well. Their vocal harmonies haven’t changed at all, the big guitars are in full force and the song writing is up to scratch – the only nod to a new century is the inclusion of London DJ Erol Alkan on production duties who sharpens their classic jangle pop and shimmering guitars for a new era. Turn it up and party like it’s 1989! (John) Sassafrass!
At the moment I can’t get enough of Sassafrass! by Tami Neilson. She was amazing in concert and this album rocks just as much! Perfect listening for those who love that old-time country/lounge/touch of rockabilly vibe. A great collection of touching songs about family, and brilliantly getting her own back on those who unashamedly tout judgements and double standards. Available on CD and vinyl, it’s most definitely sassy and frassy. (Belinda) Knock knock.
The German electronic artist who started out as a DJ/remixer has grown into a respected artist and now runs his own label – Pampa Records. His new release is a good intro to the small unique sub-genre he has helped create that generally features warm bass, gently alluring beats and imaginative use of sampling and electronics underpinning a range of guest vocalists. He has a strong sense of the whimsical but manages to balance this, through this collection of lovely wonky downbeat grooves, with a genuine emotional resonance too often absent from electronic music. (John) Soar / Catrin Finch, Seckou Keita.
Prominent Welsh classical harpist Catrin Finch and Senegalese kora (often described as Africa harp) player Seckou Keita first collaborated together in 2013 and made an acclaimed album Clychau Dibon which won the best album of 2014 in both Froots and Songlines magazine. Four years down the line, their unique bond gets stronger and this sophomore album finds both artists in sublime form, showcasing the elegant, seamless conversations. Their dazzling virtuosities allow the two string-instruments from Africa and Europe to blend into each other and create beautifully textured, glorious soundscape. Most of the music is original but taking also from African griot’s number and Bach’s Goldberg Variations, they are searching for a new musical language by looking back at their traditions. Brilliant. (Shinji) Shearwater drift / Al Fraser, Steve Burridge, Neil Johnstone.
The delicacy and sublime power of Taongo Puoro (traditional Maori instrumentation) is explored beautifully on this recent release by three Wellington musicians. What is created here is a fully immersive sonic collage that, over 18 tracks, features Taongo Puoro within soundscapes created by synthesisers, percussion, treated samples and other instruments. Its not an easy listen, at times it can be quite eerie, but the dark and ethereal ambient atmosphere is the perfect vehicle by which the mystery of these ancient instruments can be experienced. The whole thing is beautifully packaged in a thick cardboard case that features evocative art by Neil Johnstone. (John)

This is the voyage of a shearwater as it ventures into enigmatic scenery; familiar yet vague, both disturbing and comforting. Alistair Fraser’s deep connection with taonga pūoro sets the backdrop of this story with great sensibility, establishing the melancholic mood that Māori instruments so readily evoke. Over this panorama you’ll encounter the mysterious electronics of Neil Johnstone piercing through the organic weave, juxtaposing the nature of the ever changing reality with those aspects that belong to the future and the beyond. In the midst of this seamless movement are motifs of humanity embodied by accordions, pianos, and other familiar noises which serve as geographic beacons. At times submerged into deep water, at others flying high and fast through the forest, the shearwater glides with grace, undisturbed by the weather or the metropolitan traffic. There is a cyclical aspect to this album, easily lending itself to sound installations or an environment of discovery and inspiration. The overall tone invites you to slow down and ponder, paying attention to the nuances that crop up from all angles thanks to a high quality production. My recommendation is to let the music permeate your surroundings, allowing yourself to drift into what lies in your depths, waiting to be found. (Axel)

Listening to pictures : pentimento volume one.
The former jazz trumpet player, who initiated the idea of the “Fourth World” alongside Brian Eno on 1980’s ‘Fourth World Vol. 1: Possible Musics’, has released, at 81 years old, an incredible record on Ndeya, a sub-label of the UK’s Warp Records. Fusing hi-tech minimalism with world rhythms he has collaged a dream world marked by a flickering, hallucinatory energy and built around stuttering beats through which dense, treated layers of trumpet, synth, piano, and violin edits cascade and undulate. Its a remarkable release from an artist so late in his career, when most others are merely re-treading old ground. This album also features a cover art sampled from Mati Klarwein, the artist responsible for the cover of Miles Davis’ ‘Bitches Brew’. (John)

The dark side of the moon [remaster].
The Dark Side of the Moon is one of the bestselling albums of all time. It was PF’s 8th album, and spent 11 consecutive years in the top 100 and 14 years lodged in the same place. It was recorded at Abby Road studios between May 1972-January 1973, and rather than separate tracks the album is one continuous piece of music. With estimated sales are over 45 million, the themes it explored include greed (Money track) conflict and time. (Max)