Thanos [1] : Thanos returns / Jeff Lemire, writer ; Mike Deodato, Jr., artist.
“Thanos, possibly the most diabolical individual in the Marvel Universe, is back – and he’s out for vengeance on all who would oppose him! Unfortunately for the Mad Titan, he’s also heading for an unexpected reckoning…with his family. Take an ongoing walk on the dark side of the galaxy, and follow the deadly trail of destruction left in the wake of…Thanos!” (Adapted from Syndetics summary)

Extermination. Volume 1, The last and dreadful hour / written by Simon Spurrier ; art by Jeffrey Edwards and V. Ken Marion.
“WE LOST. THEY WON. In the wake of an apocalyptic alien invasion, the world’s greatest super-heroes and deadliest super-villains must form an alliance to prevent their own extermination. Two arch-enemies, Nox, a driven hero, and Red Reaper, a ruthless villain, form a volatile partnership for the greater good. The enemy of your enemy is your friend — but will they be able to ultimately put aside their bitter past to prevent global genocide?” (Adapted from Syndetics summary)

Extermination. Volume 2, To vaster darkness / [written by Simon Spurrier ; art by V. Ken Marion].
“The pulse-pounding conclusion to the odd couple superhero alien invasion!
Nox, a driven hero, and Red Reaper, a ruthless villain, form a volatile partnership in the wake of an apocalyptic alien invasion. The two arch-enemies have survived the attacks of the deadly EDDA, traversed the post-apocalyptic landscape of the U.S., and formed a rag-tag alliance of former heroes and villains. Now…they plan to strike back. Heroes will die… it’s just a matter of how many…” (Adapted from Syndetics summary)

Moon Knight : from the dead / writer, Warren Ellis ; artist, Declan Shalvey.
“Marc Spector is Moon Knight! Or is he? It’s hard to tell these days, especially when New York’s wildest vigilante protects the street with two-fisted justice and that’s right, count ’em three different personalities! But even with the force of the Egyptian moon god fueling his crusade, how does the greatest detective save a city that’s as twisted as he? Be here as Moon Knight punches ghosts, investigates a sleep experiment that’s driving its patients insane, and takes on twenty mob enforcers to save an abductee.” (Adapted from Syndetics summary) 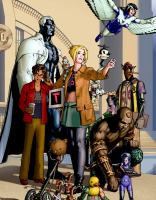 Top 10 / Alan Moore, writer ; Gene Ha, Zander Cannon, artists.
“The massive, multilayered city of Neopolis, built shortly after World War II, was designed as a home for the expanding population of science-heroes, heroines and villains that had ballooned into existance in the previous decade. Bringing these powered beings together solved some problems but created others – turning Neopolis into a pressure cooker that normal policing methods could never contain.” (Adapted from Syndetics summary)