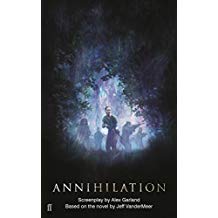 Next in our series about films that can lead you to comics is Alex Garland’s Annihilation, adapted from the critically acclaimed novel by Jeff VanderMeer, which tells the story of a team of scientists who venture into “The Shimmer”, a strange zone in the American southwest where the laws of physics and biology are altered. Several comics share visual and thematic similarities with the film, which is acclaimed for it’s mesmerising visuals, alien environments full of eerie creatures, and an exploration of the divide between man and nature.

Saga of the Swamp Thing. Book one / Moore, Alan
“With modern-day issues explored against a backdrop of horror, SWAMP THING’s stories became commentaries on environmental, political and social issues, unflinching in their relevance. Moore takes over as writer with the story “The Anatomy Lesson,” a haunting origin story that reshapes SWAMP THING mythology with terrifying revelations that begin a journey of discovery and adventure that will take him across the stars and beyond.” (Catalogue)

Animal Man. Volume 1, The hunt / Lemire, Jeff
“Animal Man Buddy Baker has gone from “super” man to family man – but is he strong enough to hold his family together when Maxine, his young daughter, starts to manifest her own dangerous powers? As these new abilities continue to terrify Buddy and his wife Ellen, things take a turn for the worse as Buddy begins a startling transformation of his own that will lead him on a journey into the heart of The Red.” (Catalogue) 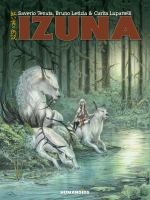 Izuna / Tenuta, Saverio
“Since the dawn of time, the Izuna wolves have been entrusted as guardians against Japan’s evil spirits. From time immemorial, the spirits of nature created the Kamigakushi, a magical veil that hid them from the impure eyes of man. But the mysterious birth of a wolf cub in the shape of a young girl threatens to upset the delicate balance between the two worlds and plunge both sides into chaos.” (Catalogue)

Sweet Tooth [1] : out of the deep woods / Lemire, Jeff
“After an apocalyptic pandemic, an ailing father lives deep in the woods with his child, a little boy with deerlike antlers. When his father expires, the boy soldiers on. One day, bounty hunters looking for mutant children beset him. A big man rescues the boy and leads him out of the forest to a refuge for kids like him, he says.” (Adapted from Booklist summary)

Trees. Volume one, In shadow / Ellis, Warren
“Trees looks at a near-future world where life goes on in the shadows of the Trees: in China, where a young painter arrives in the “special cultural zone” of a city under a Tree; in Italy, where a young woman under the menacing protection of a fascist gang meets an old man who wants to teach her terrible skills; and in Svalbard, where a research team is discovering, by accident, that the Trees may not be dormant after all, and the awful threat they truly represent.” (Catalogue)