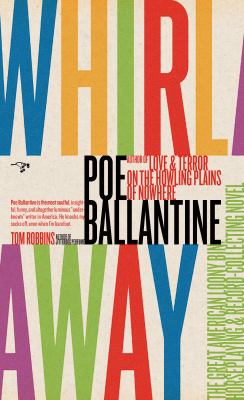 We are very proud to present our latest selection from our new fiction arrivals. In this month’s picks we have something to suit a wide variety of tastes from a new work by Captain Corelli’s Mandolin author Louis de Bernieres to a new novel by Kate Mosse, and a fantastic new work by Patchwork Planet author Anne Tyler titled Clock Dance. We hope you find something in our top picks for this month that you will truly enjoy.

Whirlaway : the great American loony bin, horseplaying & record-collecting novel / Poe Ballantine.
“On the run, he holes up in a sheltered barrio on a bluff above the Pacific Ocean owned by his wealthy but unsympathetic father. Here he meets Sweets, the telepathic dog, laments the loss of Sofia, his madhouse lover, and plays the horses at the Del Mar Racetrack. Eventually he meets up with an old friend, Shelly Hubbard, a fellow horseplayer, record collector/dealer, and hardcore loner, who tells him about his brother, Donny, dead at the age of eighteen from a tragic dive off a thirty-foot La Jolla sea cliff known as the Clam.” (Adapted from Syndetics summary)

Boy swallows universe / Trent Dalton.
“Brisbane, 1983: A lost father, a mute brother, a mum in jail, a heroin dealer for a stepfather and a notorious crim for a babysitter. It’s not as if Eli’s life isn’t complicated enough already. He’s just trying to follow his heart, learning what it takes to be a good man, but life just keeps throwing obstacles in the way – not least of which is Tytus Broz, legendary Brisbane drug dealer. But Eli’s life is about to get a whole lot more serious. He’s about to fall in love. And, oh yeah, he has to break into Boggo Road Gaol on Christmas Day, to save his mum.” (Adapted from Syndetics summary)

So much life left over / Louis de Bernieres.
“Rosie and Daniel have moved to Ceylon with their little daughter to start a new life at the dawn of the 1920s, attempting to put the trauma of the First World War behind them, and to rekindle a marriage that gets colder every day. However, even in the lush plantation hills it is hard for them to escape the ties of home and the yearning for fulfilment that threatens their marriage. Back in England, Rosie’s three sisters are dealing with different challenges in their searches for family, purpose and happiness. These are precarious times, and they find themselves using unconventional means to achieve their desires. Around them the world is changing, and when Daniel finds himself in Germany he witnesses events taking a dark and forbidding turn.” (Adapted from Syndetics summary)

Varina : a novel / Charles Frazier.
“In his powerful new novel, Charles Frazier returns to the time and place of Cold Mountain, vividly bringing to life the chaos and devastation of the Civil War.
Her marriage prospects limited, teenage Varina Howell agrees to wed the much-older widower Jefferson Davis, with whom she expects the secure life of a Mississippi landowner. Davis instead pursues a career in politics and is eventually appointed president of the Confederacy, placing Varina at the white-hot center of one of the darkest moments in American history–culpable regardless of her intentions. The Confederacy falling, her marriage in tatters, and the country divided, Varina and her children escape Richmond and travel south on their own, now fugitives with bounties on their heads, an entire nation in pursuit.” (Adapted from Syndetics summary)

Motherhood / Sheila Heti.
“In Motherhood, Sheila Heti asks what is gained and what is lost when a woman becomes a mother, treating the most consequential decision of early adulthood with the candor, originality, and humor that have won Heti international acclaim and made How Should A Person Be? required reading for a generation. In her late thirties, when her friends are asking when they will become mothers, the narrator of Heti’s intimate and urgent novel considers whether she will do so at all. In a narrative spanning several years, casting among the influence of her peers, partner, and her duties to her forbearers, she struggles to make a wise and moral choice. After seeking guidance from philosophy, her body, mysticism, and chance, she discovers her answer much closer to home.” (Adapted from Syndetics summary)

The very marrow of our bones / Christine Higdon.
“On a miserable November day in 1967, two women disappear from a working-class town on the Fraser River. The community is thrown into panic, with talk of drifters and murderous husbands. But no one can find a trace of Bette Parsons or Alice McFee. Even the egg seller, Doris Tenpenny, a woman to whom everyone tells their secrets, hears nothing. Ten-year-old Lulu Parsons discovers something, though: a milk-stained note her mother, Bette, left for her father on the kitchen table. Wally, it says, I will not live in a tarpaper shack for the rest of my life. Lulu tells no one, and months later she buries the note in the woods. At the age of ten, she starts running — and forgetting — lurching through her unraveled life, using the safety of solitude and detachment until, at fifty, she learns that she is not the only one who carries a secret.” (Adapted from Syndetics summary)

How to be famous / Caitlin Moran.
“I’m Johanna Morrigan, and I live in London in 1995, at the epicentre of Britpop. I might only be nineteen, but I’m wise enough to know that everyone around me is handling fame very, very badly. My unrequited love, John Kite, has scored an unexpected Number One album, then exploded into a Booze And Drugs Hell — as rockstars do. And my new best friend — the maverick feminist Suzanne Banks, of The Branks — has amazing hair, but writer’s block and a rampant pill problem. So I’ve decided I should become a Fame Doctor. I’m going to use my new monthly column for The Face to write about every ridiculous, surreal, amazing aspect of a million people knowing your name.” (Adapted from Syndetics summary)

The burning chambers / Kate Mosse.
“Carcassonne 1562: Nineteen-year-old Minou Joubert receives an anonymous letter at her father’s bookshop. Sealed with a distinctive family crest, it contains just five words: SHE KNOWS THAT YOU LIVE. But before Minou can decipher the mysterious message, a chance encounter with a young Huguenot convert, Piet Reydon, changes her destiny forever. For Piet has a dangerous mission of his own, and he will need Minou’s help if he is to get out of La Cité alive.” (Adapted from Syndetics summary)

Clock dance / Anne Tyler.
“Willa Drake can count on one hand the defining moments of her life. In 1967, she is a schoolgirl coping with her mother’s sudden disappearance. In 1977, she is a college coed considering a marriage proposal. In 1997, she is a young widow trying to piece her life back together. And in 2017, she yearns to be a grandmother but isn’t sure she ever will be. Then, one day, Willa receives a startling phone call from a stranger. Without fully understanding why, she flies across the country to Baltimore to look after a young woman she’s never met, her nine-year-old daughter, and their dog, Airplane. This impulsive decision will lead Willa into uncharted territory–surrounded by eccentric neighbors who treat each other like family, she finds solace and fulfillment in unexpected places.” (Adapted from Syndetics summary)

Upstate / James Wood.
“In the years since his daughter Vanessa moved to America to become a professor of philosophy, Alan Querry has never been to visit. He has been too busy at home in northern England, holding together his business as a successful property developer. His younger daughter, Helen–a music executive in London–hasn’t gone, either, and the two sisters, close but competitive, have never quite recovered from their parents’ bitter divorce and the early death of their mother. But when Vanessa’s new boyfriend sends word that she has fallen into a severe depression and that he’s worried for her safety, Alan and Helen fly to New York and take the train to Saratoga Springs.” (Adapted from Syndetics summary)