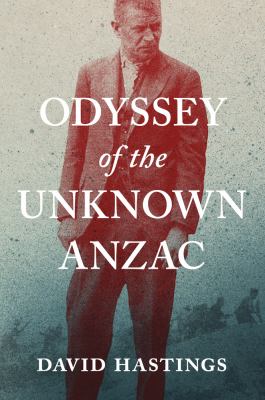 The wonderful thing about the New Zealand Collection new books shelf is the amazing variety of topics that you will find here.  As we fast approach the 100th anniversary of the end of World War One there are still lots of new titles about the ANZACS and World War One topics.  There are new additions to the poetry collection. Fascinating histories of the Great South Road, the Waikato river and Steam Punk Oamaru.  Beautiful books about New Zealand birds of prey and Banks’ illustrations of botanical treasures from Cook’s voyages.  This list ends with a thought provoking book about the history and the current situation in West Papua.

Odyssey of the unknown Anzac / Hastings, David
“Ten years after the end of World War I, the Sydney Sun reported that an unknown ANZAC still lay in a Sydney psychiatric hospital. David Hastings follows this one unknown ANZAC, George McQuay, from rural New Zealand through Gallipoli and the Western Front, through desertions and hospitals, and finally home to New Zealand.” (Publisher information)

Gallipoli to the Somme : recollections of a New Zealand infantryman / Aitken, A. C.
“Alexander Aitken was an ordinary soldier with an extraordinary mind. The student who enlisted in 1915 was a mathematical genius. Everything he saw, he could remember. Aitken began to write about his experiences in 1917 as a wounded out-patient in Dunedin Hospital. Every few years, when the war trauma caught up with him, he revisited the manuscript, which was eventually published as Gallipoli to the Somme in 1963. Aitken writes with a unique combination of restraint, subtlety, and an almost photographic vividness. For this edition, Alex Calder has written a new introduction, annotated the text, compiled a selection of images, and added a commemorative index identifying the soldiers with whom Aitken served.” (Publisher information)

All guts no glory : Nelson Tasman nurses and chaplains of World War One
“Several members of the New Zealand Society of Genealogists Nelson Branch have researched the lives of many of those nurses and chaplains who had an association with the Nelson Tasman area. This book captures the brave and courageous nurses and chaplains who were often very close to the firing line. Several chaplains were killed and 10 New Zealand nurses went down with the ship when the Marquette was torpedoed. The nurses worked in frozen, leaking tents and draughty huts often wearing tin hats and having to rush to a trench for safety when the hospitals were being bombed.” (Catalogue)

Whisper of a crow’s wing / Cullinane, Majella
“Whisper of a Crow’s Wing, is the work of a poet with a distinct and powerful voice. Cullinane conjures the ghosts that haunt places and objects; our inner and outer world, with rich, physical language. She writes with lyrical intensity about motherhood and family life, including the experience of miscarriage, and the process of moving through grief and loss to a place of acceptance and healing. This is a profound collection from a poet alive to the hidden world of memory and imagination, of the sublime in the everyday, tempered always by a shadow of the fragility of life and love.” (Catalogue)

Ghost South Road / Hamilton, Scott
“The Great South Road was built in 1862 to carry a British army into the Waikato Kingdom. When the British invaded the Waikato in 1863, soldiers shared the road with Maori refugees from Auckland. Today the eroding earthen walls of forts and pa and military cemeteries remember the road’s history. They sit beside the car dealerships and kava bars and pawn shops of South Auckland. Ghost South Road features obscure as well as famous figures from New Zealand history and illustrates the epic walk that the author and photographers made along the two hundred kilometre length of the Great South Road.” (Catalogue)

The Waikato : a history of New Zealand’s greatest river / Moon, Paul
“From snow to surf, the Waikato is New Zealand’s longest river. This fascinating account takes a historical journey along its 425 kilometre length, uncovering extraordinary reports of the people, places and events along its route. Historian Paul Moon traces the Waikato’s path until it exits into the Tasman Sea at Port Waikato. Along the way he uncovers settlements that have disappeared, sites scarred by wars, some of the world’s most convulsive geological events, great tragedies, and the remarkable stories that have taken place along the river.” (Abridged from Catalogue)

Penguins under the porch : a Yorkshireman’s ode to Oamaru / Harbourne, David
“David Harbourne first stumbled across Oamaru more or less by chance while on a short visit to New Zealand from his home in Yorkshire, England. He quit his job, travelled half way round the world and spent a long and very happy time poking around and talking to anyone who would talk back. He ate whitebait frittata, muttonbird and Kurtoskalacs, and became an honorary Oamaruvian just in time for the Victorian heritage celebrations. The result is this entirely quirky, often hilarious, anecdotal “ode” to a town David Harbourne believes is a jewel in New Zealand’s crown.” (Catalogue) 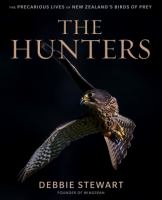 The hunters : the precarious lives of New Zealand’s birds of prey / Stewart, Debbie.
“The majestic New Zealand falcoln in flight looks like a sleek killing machine – but it is one of the most endangered and misunderstood birds in our nation today. This landmark book presents all of our amazing birds of prey, from the cute ruru (or morepork) we hear calling in the night, to the hawks that hover over roadkill on our highways. Stunning photographs show the lives of these birds in intimate close-ups, and the stories make a case for their continuing protection as a vital part of our fragile ecosystem.” (Catalogue)

Joseph Banks’ Florilegium : botanical treasures from Cook’s first voyage
“Joseph Banks accompanied Captain Cook on his first voyage round the world from 1768 to 1771. Banks, along with the Swedish naturalist Daniel Solander, collected exotic flora from Madeira, Brazil, Tierra del Fuego, the Society Islands, New Zealand, Australia and Java, bringing back over 1300 species that had never been seen or studied by Europeans. The Florilegium was never published in Banks’ lifetime, and it was not until 1990 that a complete set in colour was issued in a boxed edition under the direction of the British Museum. It is from these prints that the present selection is made.” (Catalogue)

See no evil : New Zealand’s betrayal of the people of West Papua / Leadbeater, Maire
“See No Evil issues a challenge to New Zealanders. The book begins by relating the little-known history of West Papua, but its focus is on the impact of New Zealand’s foreign policy on the indigenous Melanesian inhabitants. The consequences of repressive Indonesian rule have been tragic for the West Papuan people, who are experiencing ‘slow genocide’. West Papua remains largely closed to foreign journalists, but its story is now beginning to be heard.” (Catalogue)