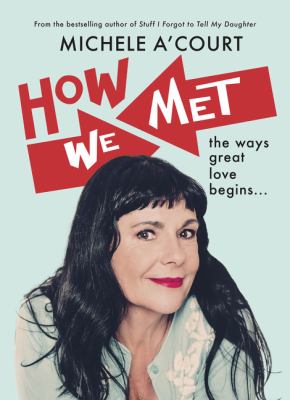 Come for the quiet reading spaces on the second floor at Central Library and find something interesting amongst these selected new books of the New Zealand collection. This month you can find studies of love and loss, study our kiwi language and our literature, find out how a graffiti project became a monument and find new insights into Pacifica history from Cook to the dawn raids.

How we met : the ways great love begins… / Michèle A’Court.
“How We Met is based on a collection of ‘How We Met’ stories – those lovely stories couples love to tell (and we all love to hear) about how they got together – The author’s theory: that these stories of how couples meet – the romantic, absurd, serendipitous, convoluted, scandalous, breath-taking moments of connection – help to weave their lives together. Partly as ‘proof’ that they were meant to begin this couple-journey, and also because in each retelling they go back to those first falling-in-love feelings and rekindle the passion. Michele then tests her theory out on a neuroscientist and a psychologist, and by the end of the book has some useful things to say not only about how great love starts, but how it stays great.” (Syndetics summary)

Sorrows of a century : interpreting suicide in New Zealand, 1900-2000 / John C. Weaver.
“Focusing on New Zealand because it has the most comprehensive and accessible coroners’ records, Weaver analyzes a staggering amount of information to determine the social and cultural factors that contribute to suicide rates. He examines the country’s investigations into sudden deaths, places them within the context of major events and societal changes, and turns to witnesses’ statements, suicide notes, and medical records to remark on prevention strategies.” (Publisher information) 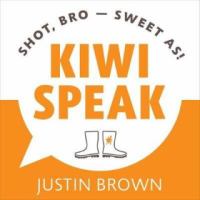 Kiwi speak / Justin Brown.
“Do you speak Nu Zild? In Kiwi Speak, bestselling author Justin Brown eavesdrops at the dinner table, the school yard, the farm and the sports club to bring us an entertaining dictionary of phrases and expressions – the often hilarious, sometimes baffling New Zealandisms we use in everyday life.” (Syndetics summary)

Poetry and Exile : Letters from New Zealand 1938-1948
“German-Jewish poet Karl Wolfskehl spent the last years of his life, from 1938 to 1948, in Auckland, New Zealand, on the globe’s last island reef, as a refugee from Nazi Germany. The conditions of his life forced him to consider the very nature of human existence, and his letters from New Zealand amount to an intellectual autobiography. During his Auckland years Wolfskehl got to know the formative generation of New Zealand writers:Frank Sargeson, R. A. K. Mason, A. R. D. Fairburn (who dedicated his Poems 1929-1941 to Wolfskehl),Denis Glover and the acolytes of the Caxton Press and, to a lesser degree, Allen Curnow.” (Syndetics summary)

The Bulford Kiwi : the kiwi we left behind / Colleen Brown.
“Little known story from after WW1, when NZ troops waited months in Sling Camp in southern England after the war ended to get a ship home. Rioting in the camp led to plans to keep troops busy by cutting a giant Kiwi into the chalk hill behind the camp. The Bulford Kiwi has become a monument built by soldiers, not governments, for themselves and their mates. In 2017 the Bulford Kiwi was made a protected heritage site by UK government.” (Syndetics summary)

Discoveries : the voyages of Captain Cook / Nicholas Thomas.
“Cook’s great voyages marked the end of an era in world history. As he sailed into Hawaii in January 1778 he made contact with the last of the human civilizations to grow up independently of the rest of the world. But equally for the Polynesians and Melanesians of the Pacific, Cook’s arrival in their midst merely marked a further (if disastrous) twist in diverse histories already many centuries old. In this immensely enjoyable and absorbing book Cook’s journeys are reimagined, attempting to leave behind (or master) our later preoccupations to let us see what Cook and his associates experienced and what the societies he encountered experienced.” (Syndetics summary)

Dawn Raids
“Tension is rising in 1970s New Zealand. Muldoon’s government is cracking down on illegal immigration and the notorious dawn raids are ripping Pasifika families from their beds. At the eye of this political storm, everyday New Zealanders like Sione struggle to keep their families united. Fuarosa, the family’s resident overstayer, fights against the chaos to keep hold of her freedom, and Sione’s sister Teresa might be getting in too deep with black rights activists. First staged in 1997, Dawn Raids is just as confronting and relevant now as it has ever been. Oscar Kightley pulls no punches and brings the play to life with his trademark hilarity and wit.” (Syndetics summary) 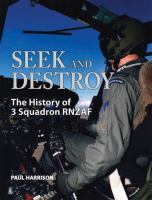 Seek and destroy : the history of 3 Squadron RNZAF / Paul Harrison.
“In 2015 No.3 Squadron Royal New Zealand Air Force celebrated 50 years of continuous helicopter operations since it reformed in August 1965. Seek and Destroy is the official history of the machines and personnel that make up the colourful and wide-ranging operations of this unique squadron, which was first formed in 1930 and whose aircraft and personnel have seen service all around the world from the UK to Asia, the Pacific and the Antarctic. This illustrated hardback brings together anecdotal stories of the operations and exercises conducted during the past 50 years, including numerous civil defence and peacekeeping activities.” (Syndetics summary) 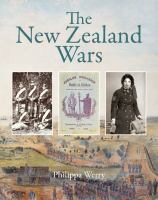 The New Zealand Wars / Philippa Werry.
“The story of the 19th century New Zealand Wars, a part of New Zealand’s history that many people wish they knew more about. The book describes how the wars came about, where and when they were fought, who was involved, and how they affected women and children. It explains the emergence of Kīngitanga or Māori King movement, the land confiscations and the story of Parihaka. The story is told in an accessible way full of fascinating detail, eye-witness accounts, illustrations and little known facts, with lists of websites, resources and books for those who want to discover more.” (Publisher description)

Towards democratic renewal : ideas for constitutional change in New Zealand / Geoffrey Palmer and Andrew Butler, with assistance from Scarlet Roberts.
“In 2016, Sir Geoffrey Palmer and Andrew Butler proposed and published a written, codified constitution for Aotearoa New Zealand. Since then the authors have travelled the country, discussing with the public the nature of New Zealand’s identity and where the country is headed. This clear, revised constitution defines and entrenches government accountability and transparency, protects the rights of our peoples and tangata whenua, and offers transformative steps to uphold the sovereignty and integrity of Aotearoa New Zealand.” (Publisher information)