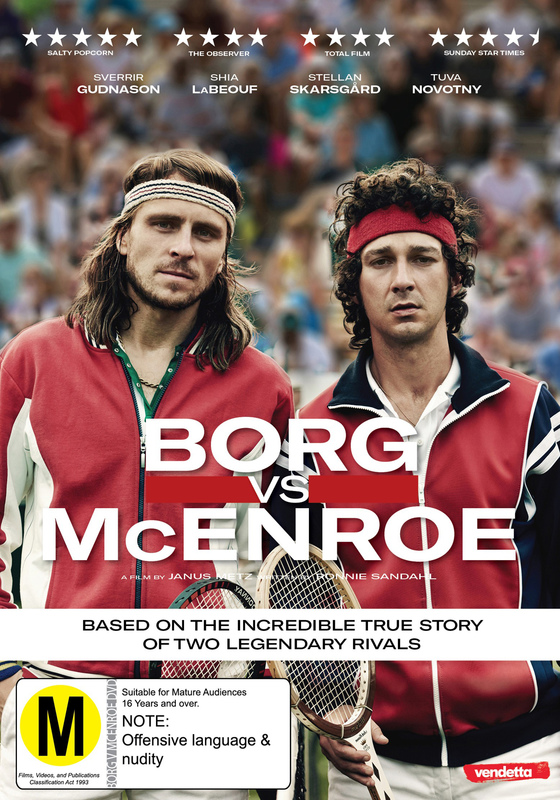 New DVDs include the return of Rob Brydon and Steve Coogan for another trip, this time to Spain; the Borg/McEnroe tennis rivalry which came to a head during the 1980 Wimbledon final; LGBT dramas Call Me By Your Name and God’s Own Country; the inspiring and heartwarming story of August Pullman in Wonder; and the acclaimed TV adaptation of the Margaret Atwood novel The Handmaid’s Tale.

The trip to Spain : the 6-part series.
“From acclaimed director Michael Winterbottom comes the follow up to the BAFTA winning first series The Trip and The Trip to Italy. Rob Brydon and Steve Coogan are back. Six meals in six different places on a road trip through Spain from the North Atlantic to the Mediterranean coast, visiting Cantabria, the Basque region, Aragon, Rioja, Castile La Mancha and ending in Andalucia. Included are all six episodes from the Sky television series with a full course of deleted scenes.” (Syndetics summary)

Borg vs McEnroe.
“Borg/McEnroe tells the story of the epic rivalry between Swedish tennis legend Bjorn Borg and his greatest adversary, the brash American John McEnroe, which came to a head during the 1980 Wimbledon Championships.” (Syndetics summary)

Les hommes de l’ombre. Season 3.
“Six months before the Presidential elections, the leader of the extreme right party who is ahead in the opinion polls, is assassinated before the eyes of Simon Kapita, President Marjories closest advisor. This attack creates disruption in the political spectrum and presages a bloody race for the Elyse. Throughout the final months of his Presidency, both right and left wing parties are involved in political manoeuvring, backstabbing and betrayals, while in his private life, his relationship with Elisabeth is tearing apart and becomes the target of the tabloids. For Simon Kapita, this last campaign becomes the one of all dangers..” (Syndetics summary)

Call me by your name.
“It’s the summer of 1983 in Italy, and Elio, a precocious 17-year-old, spends his days in his family’s villa transcribing and playing classical music, reading and flirting with his friend Marzia. One day, Oliver, a charming American scholar arrives as the annual summer intern tasked with helping Elio’s father, an eminent professor. Elio and Oliver discover the heady beauty of awakening desire over the course of a summer that will alter their lives forever.” (Syndetics summary)

God’s own country.
“Spring. Yorkshire. Young farmer Johnny Saxby numbs his daily frustrations with binge drinking and casual sex, until the arrival of a Romanian migrant worker for lambing season ignites an intense relationship that sets Johnny on a new path.” (Syndetics summary)

Only the brave.
“Only the Brave, based on the true story of the Granite Mountain Hotshots, is the heroic story of one unit of local firefighters that through hope, determination, sacrifice, and the drive to protect families, communities, and our country become one of the most elite firefighting teams in the country. As most of us run from danger, they run toward it–they watch over our lives, our homes, everything we hold dear, as they forge a unique brotherhood that comes into focus with one fateful fire.” (Mightyape.co.nz)

Wonder.
“Based on the New York Times bestseller, WONDER tells the inspiring and heartwarming story of August Pullman. Born with facial differences that, up until now, have prevented him from going to a mainstream school, Auggie becomes the most unlikely of heroes when he enters the local fifth grade. As his family, his new classmates, and the larger community all struggle to find their compassion and acceptance, Auggie’s extra­ordinary journey will unite them all and prove you can’t blend in when you were born to stand out.” (Mightyape.co.nz)

Peaky Blinders. Season four.
“Thomas Shelby heads up one of Birmingham’s most feared criminal organisations. But when he sees an opportunity to move up in the world, it becomes clear that his ambition knows no bounds.” (Syndetics summary)

The handmaid’s tale. Season one.
“A religion-based autocracy has taken over most of the United States, renaming the country Gilead. In this country women are second-class citizens. Anyone trying to escape is punished. One such person is June, who is captured while trying to escape with her husband and child and is sentenced to be a handmaid, bearing children for childless government officials. As a handmaid, June is renamed Offred.” (Syndetics summary)

Star Wars. The last Jedi.
“The Skywalker saga continues as the heroes of The Force Awakens join the galactic legends in an epic adventure. Having taken her first steps into the Jedi world, Rey joins Luke Skywalker on an adventure with Leia, Finn and Poe that unlocks mysteries of the Force and secrets of the past.” (Syndetics summary)

The killing of a sacred deer.
“Dr. Steven Murphy (Colin Farrell) is a renowned cardiovascular surgeon presiding over a spotless household with his ophthalmologist wife Anna (Nicole Kidman) and their two exemplary children, 12-year-old Bob (Sunny Suljic) and 14-year-old Kim (Raffey Cassidy). Lurking at the margins of his idyllic suburban existence is Martin (Barry Keoghan), a fatherless teen who Steven has covertly taken under his wing. As Martin begins insinuating himself into the family’s life in ever-more unsettling displays, the full scope of his intent becomes menacingly clear when he confronts Steven with a long-forgotten transgression that will shatter the Murphy family’s domes­tic bliss.” (Mightyape.co.nz)