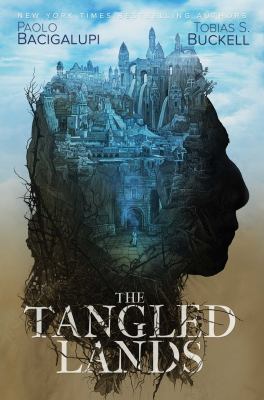 All aspects of science fiction and fantasy — dystopian fiction, space warfare, aliens, magic, planetary missions, and much more — are represented each month in our selections from the new novels added to Wellington City Libraries collection. Readers of this genre are always guaranteed hours of escapist pleasure.

The fallen kingdom / Elizabeth May.
“My name is Lady Aileana Kameron. First the fae murdered my mother. Then they destroyed my world. Then one of them killed me. Now I’m fighting for more than revenge.
The long-awaited final book in the Falconer trilogy is an imaginative tour-de-force that will thrill fans of the series. Packed with immersive detail, action, romance, and fae lore, The Fallen Kingdom brings the Falconer’s story to an epic and unforgettable conclusion.” (Adapted from Syndetics summary)

The tangled lands / Paolo Bacigalupi & Tobias Buckell.
“Khaim, The Blue City, is the last remaining city in a crumbled empire that overly relied upon magic until it became toxic. It is run by a tyrant known as The Jolly Mayor and his devious right hand, the last archmage in the world. Together they try to collect all the magic for themselves so they can control the citizens of the city. But when their decadence reaches new heights and begins to destroy the environment, the people stage an uprising to stop them. In four interrelated parts, The Tangled Lands is an evocative and epic story of resistance and heroic sacrifice in the twisted remains surrounding the last great city of Khaim.” (Adapted from Syndetics summary)

The bitter twins / Jen Williams.
“The Ninth Rain has fallen. The Jure’lia are awake. Nothing can be the same again. Tormalin the Oathless and the fell-witch Noon have their work cut out rallying the first war-beasts to be born in Ebora for three centuries. But these are not the great winged warriors of old. Hatched too soon and with no memory of their past incarnations, these onetime defenders of Sarn can barely stop bickering, let alone face an ancient enemy who grow stronger each day.The key to uniting them, according to the scholar Vintage, may lie in a part of Sarn no one really believes exists. But finding it will mean a perilous journey in a time of war, while new monsters lie in wait for those left behind.” (Adapted from Syndetics summary)

The long sunset / Jack McDevitt.
“From Nebula Award winner Jack McDevitt comes the eighth installment in the popular The Academy series. Despite taking part in the recent scientific breakthrough that rejuvenates the human body and expands one’s lifespan, Priscilla “Hutch” Hutchins finds herself as a famous interstellar pilot with little to do, until a message from an alien race arrives. The message is a piece of music from an unexplored area. Despite the fact that this alien race could pose a great danger and that this message could have taken several thousand years to travel, the program prepares the last interstellar ship for the journey. As the paranoia grows, Hutch and her crew make an early escape–but what they find at the other end of the galaxy is completely unexpected.” (Adapted from Syndetics summary)

Twice bitten : an Argeneau novel / Lynsay Sands.
“For someone who’s been around for over a hundred and forty years, immortal Elspeth Argeneau hasn’t done a whole lot of living. Now that she’s moved away from her controlling mother, she’s tracking down rogue vampires and enjoying some overdue freedom. A fling would be fun. A life mate can wait. Yet to Elspeth’s surprise, her landlady’s hot grandson checks both boxes. Wyatt fell instantly in love with Elspeth four years ago. He’s stunned to run into her again, especially as she has no memory of him. With mysterious “accidents” besieging Elspeth, the ex-Special Forces soldier appoints himself her bodyguard. But time is running out to uncover the truth about her enemies–and rediscover the man determined to love her for eternity.” (Adapted from Syndetics summary)