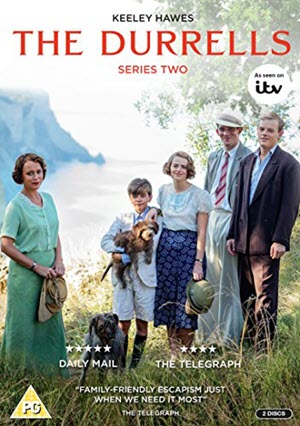 These new DVDs have a biographical theme with TV show The Durrells, Goodbye Christopher Robin (about children’s author A. A. Milne), Battle of the sexes (featuring the 1973 tennis match between women’s world champion Billie Jean King and ex-men’s-champ Bobby Riggs) & A Quiet Passion (Emily Dickinson); NZ tinged Hollywood blockbuster Thor: Ragnarok; acclaimed animation with My Life as a Zucchini; and the latest season of historical romance Outlander.

The Durrells. Series two.
“The Durrells sees impoverished but sparky widow Louisa Durrell make the radical decision to seek out a new destiny for her family when her options in late 1930’s England seem to be limited to struggling on or marrying a wealthy but dreary older man. Concerned that the lives of her four ‘children’, ranging in age from 11 to 21, are heading down the wrong track, she relocates her reluctant brood to a dilapidated house in the Greek sun.” (Syndetics summary)

Justice League.
“Fueled by his restored faith in humanity and inspired by Superman’s selfless act, Bruce Wayne enlists the help of his newfound ally, Diana Prince, to face an even greater enemy. Together, Batman and Wonder Woman work quickly to find and recruit a team of metahumans to stand against this newly awakened threat. But despite the formation of this unprecedented league of heroes it may already be too late to save the planet form an assault of catastrophic proportions.” (Syndetics summary)

Thor. Ragnarok.
“Thor is imprisoned on the other side of the universe and finds himself in a race against time to get back to Asgard to stop Ragnarok, the destruction of his homeworld and the end of Asgardian civilization, at the hands of an all-powerful new threat, the ruthless Hela.” (Syndetics summary)

My life as a Zucchini.
“After losing his mother, a young boy is sent to a foster home with other orphans his age where he begins to learn the meaning of trust and true love.” (Syndetics summary)

A quiet passion.
“The story of poet Emily Dickinson, whose genius, wit, intellectual independence, and pathos only came to be recognized after her death.” (Syndetics summary)

Battle of the sexes.
“In the wake of the sexual revolution and the rise of the women’s movement, the 1973 tennis match between women’s world champion Billie Jean King and ex-men’s-champ and serial hustler Bobby Riggs became one of the most watched televised sports events of all time, reaching 90 million viewers around the world. As the rivalry between King and Riggs kicked into high gear, off-court each was fighting more personal and complex battles.” (Syndetics summary)

Goodbye Christopher Robin.
“A rare glimpse into the relationship between beloved children’s author A. A. Milne and his son Christopher Robin, whose toys inspired the magical world of Winnie the Pooh. Along with his mother Daphne, and his nanny Olive, Christopher Robin and his family are swept up in the international success of the books; the enchanting tales bringing hope and comfort to England after the First World War. But with the eyes of the world on Christopher Robin, what will the cost be to the family?” (Syndetics summary)

Madame.
“Adding a little spice to a waning marriage, Anne and Bob, a wealthy and well-connected American couple, move into a manor house in romantic Paris. While preparing a particularly luxurious dinner for sophisticated international friends, our hostess discovers there are 13 guests. Panic-stricken, Anne insists her loyal maid Maria disguise herself as a mysterious Spanish noble woman to even out the numbers. But a little too much wine and some playful chat lead Maria to accidentally endear herself to a dandy British art broker. Their budding romance will have Anne chasing her maid around Paris and finally plotting to destroy this most unexpected and joyous love affair.” (Syndetics summary)

Detroit.
“Amidst the chaos of the Detroit Rebellion, with the city under curfew and as the Michigan National Guard patrolled the streets, three young African American men were murdered at the Algiers Motel.” (Syndetics summary)

Outlander. Season three.
“The third season picks up right after Claire (Caitriona Balfe) travels through the stones to return to her life in 1948. Now pregnant with Jamie’s (Sam Heughan) child, she struggles with the fallout of her sudden reappearance and its effect on her marriage to her first husband, Frank (Tobias Menzies). Meanwhile, in the 18th century, Jamie suffers from the aftermath of his doomed last stand at the historic battle of Culloden, as well as the loss of Claire. As the years pass, Jamie and Claire attempt to make a life apart from one another, each haunted by the memory of their lost love. The budding possibility that Claire can return to Jamie in the past breathes new hope into Claire’s heart… as well as new doubt. Separated by continents and centuries, Claire and Jamie must find their way back to each other. As always, adversity, mystery, and adventure await them on the path to reunion. And the question remains: When they find each other, will they be the same people who parted at the standing stones, all those years ago?” (Syndetics summary)