Want to know what the most popular reads are in Wellington? Then this is the list for you! Fiction, non-fiction, children’s books, you name it. Place your reserves and get in line because these were the top 10 most reserved books this month!

Lullaby / Leïla Slimani ; translated from the French by Sam Taylor
“When Myriam, decides to return to work after having children, she and her husband look for the perfect caretaker for their two young children. They never dreamed they would find Louise: a quiet, polite and devoted woman who sings to their children, cleans the family’s chic apartment, stays late without complaint and is able to host enviable birthday parties.The couple and nanny become more dependent on each other. But as jealousy, resentment and suspicions increase, their  idyllic tableau is shattered.” (Adapted Syndetics summary) 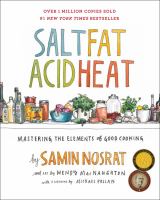 Salt, fat, acid, heat : mastering the elements of good cooking / by Samin Nosrat
“With charming narrative, illustrated walkthroughs, and a lighthearted approach to kitchen science, Samin demystifies the four elements of good cooking for everyone. Featuring illustrations and infographics that reveal an atlas to the world of flavor, Salt, Fat, Acid, Heat will be your compass in the kitchen. Destined to be a classic, it just might be the last cookbook you’ll ever need.” (Adapted Syndetics summary)

Priestdaddy / Patricia Lockwood.Priestdaddy: A Memoir
“Interviewing emblematic moments from her childhood and adolescence, from an ill-fated family trip and an abortion clinic, to her involvement in a cult-like youth group, with scenes that chronicle the eight-month adventure in her parents’ household after a decade of living on their own. She pivots from the raunchy to the sublime, from the comic to the deeply serious, exploring issues of belief, belonging, and personhood.” (Adapted Syndetics summary)

Lost connections : uncovering the real causes of depression– and the unexpected solutions / Johann Hari.
“Award-winning journalist Johann Hari suffered from depression since he was a child and was told that his problems were caused by a chemical imbalance in his brain. As an adult, trained in the social sciences, he began to investigate and learned that almost everything we have been told is wrong. His TED talk has been viewed more than 8 million times and revolutionized the global debate. This book will do the same.” (Adapted Syndetics summary)

The subtle art of not giving a fuck : a counterintuitive approach to living a good life / Mark Manson.
“In this generation-defining self-help guide, a superstar blogger cuts through the crap to show us how to stop trying to be “positive” all the time so that we can truly become better, happier people. For decades, we’ve been told that positive thinking is the key to a happy, rich life. “F**k positivity,” Manson says. He tells it like it is–a dose of raw, refreshing, honest truth that is sorely lacking today.” (Adapted Syndetics summary)

Educated : a memoir / Tara Westover
“Tara Westover was seventeen the first time she set foot in a classroom. Born to survivalists in the mountains of Idaho, her quest for knowledge took her, to Harvard and to Cambridge University. An account of the struggle for self-invention, fierce family loyalty, and of the grief that comes from severing one’s closest ties, she has crafted a universal coming-of-age story that gets to the heart of what an education is and what it offers. The perspective to see one’s life through new eyes, and the will to change it.” (Adapted Syndetics summary)

Drawn out : a seriously funny memoir / Tom Scott.
“Tom Scott is a political commentator, cartoonist, satirist, scriptwriter, playwright, raconteur and funny man. He’s been drawing political cartoons for Wellington’s Dominion Post since 1988, was in the Press Gallery and was famously banned by PM Muldoon. His memoir covers his childhood – a tragi-comedy of a poor Irish Catholic family, his uni days when he was editor of the student newspaper and sued for blasphemous libel, his parliamentary career, his work with Ed Hillary and more.” (Adapted Syndetics summary)

12 rules for life : an antidote to chaos / Jordan B. Peterson ; foreword by Norman Doidge ; illustrations by Ethan Van Scriver
“Humorous, surprising and informative, Dr. Peterson tells us why skateboarding boys and girls must be left alone, what terrible fate awaits those who criticize too easily, and why you should always pet a cat when you meet one on the street. 12 Rules for Life shatters the modern commonplaces of science, faith and human nature, while transforming and ennobling the mind and spirit of its readers.” (Adapted Syndetics summary)

Driving to Treblinka : a long search for a lost father / Diana Wichtel.
“Raised in Canada, her mother a Catholic New Zealander and her father a Polish Jew who miraculously survived the Holocaust. When she’s thirteen, her life changes dramatically as her mother whisks her and her sister and brother away to New Zealand. Their father is to follow but she never sees him again. This unforgettable narrative of her search for answers, is also a deep reflection on the meaning of family, the trauma of loss, and the insistence of memory.” (Adapted Syndetics summary)

The diary of a bookseller / Shaun Bythell.
“Shaun Bythell owns The Bookshop, Wigtown – Scotland’s largest second-hand bookshop. In these wry and hilarious diaries, Shaun provides an inside look at the trials and tribulations of life in the book trade, from struggles with eccentric customers to wrangles with his own staff. He takes us with him on buying trips to old estates and auction houses, recommends books, introduces us to the thrill of the unexpected find, and evokes the rhythms and charms of small-town life, always with a sharp and sympathetic eye.” (Adapted Syndetics summary)