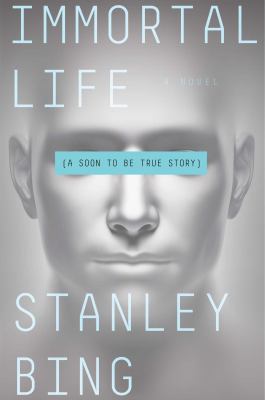 The selection of recently received new titles in our science fiction and fantasy collection always illustrates the wonderful diversification of themes and plots of this genre. This month there are novels about immortality, espionage, political intrigue, time travel, utopias and several techno thrillers.

Immortal life : a soon to be true story / Stanley Bing.
“Immortal Life, a fantasy, an impossible dream, for now, maybe. The moguls of Big Tech are pouring their mountain of wealth into finding a cure for death. None of these titans is richer than Arthur Vogel. This inventor, tech tycoon, and all-round monster has amassed trillions and rules over a corporate empire stretching all the way to Mars. The newest, and most expensive, life extension technology has allowed him to live to 127 years, but time is running out. His last hope to escape the inevitable lies with Gene, a human being specifically created for the purpose of housing Arthur’s consciousness. The plan is to discard his used-up old carcass and come to a second life in a young, strong body with all appropriate working parts. But there’s a problem: Gene. He may be artificial, but he is a person. And he has other ideas.” (Adapted from Syndetics summary)

The Erstwhile / Brian Catlin.
“The Vorrh is a vast unmapped and very mysterious jungle in Africa. No-one comes out of it in one piece. Survivors report strange, mind-bending phenomena and horrific monsters. It is rumored that the Garden of Eden still exists somewhere in the middle of it. In The Erstwhile it transpires that some angels have escaped Eden and the Vorrh and are living in hiding in London, some in disguise as lunatics in Bedlam. Good and evil angels and humansare heading towards a final, Miltonic apocalyptic battle for the soul of humanity. The Erstwhile is the second book in the Vorrh trilogy.” (Adapted from Syndetics summary)

Crosstown : a novel / by Loren W. Cooper.
“Zethus is a sorcerer, a self-described spiritual thug for hire. He makes his living in CrossTown, a place where the many world hypotheses of modern physics manifests itself, where possibilities and probabilities overlap. Caught up in a web of intrigue as he investigates the death of his master, Corvinus, and pursued by agents that want to erase all knowledge of Corvinus’s work, Zethus discovers that the key to his master’s murder lies in the last project he had pursued before his death. The roots of this project lie deep in the past, at the origin of CrossTown’s fractured reality. Once he understands the stakes, Zethus must make the dangerous journey to the cradle of history. The price he must pay to find the answers he seeks will threaten everything he holds dear, including his own humanity.” (Adapted from Syndetics summary)

1637 : the Volga rules / Eric Flint, Paula Goodlett, Gorg Huff.
“It’s been five years since a cosmic incident known as The Ring of Fire transported the modern day town of Grantville, West Virginia, through time and space to 17th century Europe. The course of world history has been forever altered, and Russia is no exception. Inspired by the American up-timers’ radical notion that all people are created equal, Russian serfs are rebelling. The entire village of Poltz, led by blacksmith Stefan Andreevich, pulls up stakes to make a run for freedom. The Czar Mikhail has escaped house arrest and makes his way to the village of Ufa. There he intends to set up a government-in-exile. It is to Ufa that the serfs of Poltz are heading, as well. The path is dangerous, for the serfs as well as the czar as they face great distances and highwaymen. But the worst threat comes from the aristocracy who seek to crush the serfs and execute the czar in a bid to drive any hope for Russian freedom.” (Adapted from Syndetics summary)

Time shards / Dana Fredsti, David Fitzgerald.
“Our world is gone, instantly replaced by a new one made of scattered remnants of the past, present, and future, dropped alongside one another in a patchwork of “shards”. Monsters from Jurassic prehistory, ancient armies, and high-tech robots all coexist in this deadly post-apocalyptic landscape. A desperate group of survivors sets out to locate the source of the disaster. They include 21st century Californian Amber Richardson, Cam, a young Celtic warrior from Roman Britannia, Alex Brice, a policewoman from 1985, and Blake, a British soldier from World War II. With other refugees from across time, they must learn the truth behind the Event, if they are to survive.” (Adapted from Syndetics summary)

The forgotten beasts of Eld / Patricia A. McKillip.
“Young Sybel, the heiress of powerful wizards, needs the company of no-one outside her gates. In her exquisite stone mansion, she is attended by exotic, magical beasts: Riddle-master Cyrin the boar; the treasure-starved dragon Gyld; Gules the Lyon, tawny master of the Southern Deserts; Ter, the fiercely vengeful falcon; Moriah, feline Lady of the Night. Sybel only lacks the exquisite and mysterious Liralen, which continues to elude her most powerful enchantments. But when a soldier bearing an infant arrives, Sybel discovers that the world of man and magic is full of both love and deceit, and the possibility of more power than she can possibly imagine.” (Adapted from Syndetics summary)

The will to battle / by Ada Palmer.
“This is the third book of 2017 John W. Campbell Award winner Ada Palmer’s Terra Ignota. The long years of near-utopia have come to an abrupt end. Peace and order are now figments of the past. Corruption, deception, and insurgency hum within the once steadfast leadership of the Hives, nations without fixed location. The heartbreaking truth is that for decades, even centuries, the leaders of the great Hives bought the world’s stability with a trickle of secret murders, mathematically planned, so that no faction could ever dominate and that the balance held. The Hives’ façade of solidity is the only hope they have for maintaining a semblance of order, for preventing the public from succumbing to the savagery and bloodlust of wars past. But as the great secret becomes more and more widely known, that facade is slipping away. Just days earlier, the world was a pinnacle of human civilization. Now everyone, Hives and hiveless, Utopians and sensayers, Emperors and the downtrodden, warriors and saints, scrambles to prepare for the seemingly inevitable war.” (Adapted from Syndetics summary)

Elysium fire : a Prefect Dreyfus Emergency / Alastair Reynolds.
“One citizen died a fortnight ago, two a week ago, four died yesterday and unless the cause can be found and stopped within the next four months, everyone will be dead. For the Prefects, the hunt for a silent, hidden killer is on.The technological implants which connect every citizen to each other have become murder weapons, and no one knows who or what the killer is, or who the next targets will be. But their reach is spreading, and time is not on the Prefects’ side.” (Adapted from Syndetics summary)

Dark state / Charles Stross.
“In the near-future, the collision of two nuclear superpowers across timelines, one in the midst of a technological revolution and the other a hyper-police state, is imminent. In Commissioner Miriam Burgeson’s timeline, her top level agents run a high risk extraction of a major political player. Meanwhile, a sleeper cell activated in Rita’s, the Commissioner’s adopted daughter and newly-minted spy, timeline threatens to unravel everything.” (Adapted from Syndetics summary)

Sweet dreams / Tricia Sullivan.
“Charlie is a dreamhacker, able to enter your dreams and mold their direction. As far as she knows, she’s the only person who can do this. Unfortunately, her power comes with one drawback; Charlie also has narcolepsy, and may fall asleep at the most inopportune moment. But in London 2022, her skill is in demand. When she is hired by a minor celebrity who dreams of a masked Creeper then sleepwalks off a tall building, Charlie begins to realise that someone else might be able to invade dreams.” (Adapted from Syndetics summary)