Check out this wide range of intriguing books on popular music. They include The Life of Songs which is the fascinating backstories of hit songs, the rare study about ‘post-rock’, and the insightful biography of Joni Mitchell. 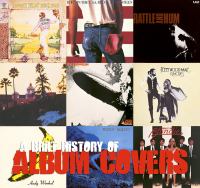 A brief history of album covers / Jason Draper ; foreword by Paul Du Noyer.
“Cover art can be an influential factor in a record’s success, and some designs are so memorable that they go down in design and music history – who doesn’t instantly recognize the covers for the Beatles’ Sergeant Pepper’s Lonely Hearts Club Band or Pink Floyd’s Dark Side of the Moon? Now celebrate some of the greatest covers of the last 50 years alongside entertaining and informative text, in this great little book that will make an ideal gift for any music aficionado or art and design enthusiast.” (Syndetics summary)

The life of a Song : the fascinating stories behind 50 of the world’s best-loved Songs / edited by David Cheal and Jan Dalley.
“Each 600-word piece gives a mini-biography of a single song, from its earliest form (often a spiritual, or a jazz number), through the various covers and changes, often morphing from one genre to another, always focusing on the ‘biography’ of the song itself while including the many famous artists who have performed or recorded it. The selection covers a wide spectrum of the songs we all know and love – rock, pop, folk, jazz and more. Each piece is pithy, sparkily written, knowledgeable, entertaining, full of anecdotes and surprises. They combine deep musical knowledge with the vivid background of the performers and musicians, and of course the often intriguing social and political background against which the songs were created.” (Syndetics summary) 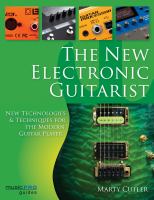 The new electronic guitarist : new technologies and techniques for the modern guitar player / Marty Cutler.
“In The New Electronic Guitarist, Marty Cutler puts more than thirty years of expertise at your fingertips, explaining the nature and history of guitar synthesis before walking you through all the tools you need to find your sound. This unprecedented, pragmatically subjective book contains everything you need to know while scouting and adapting today’s finest products and technologies to your favorite guitar. From the Beatles to Prince, from Hendrix to EVH, all the greats have obsessively managed and altered every element that influences their tone. Why restrict your creative potential? Boldly take your twentieth century rig into the twenty-first with The New Electronic Guitarist !” (Syndetics summary)

Reckless daughter : a portrait of Joni Mitchell / David Yaffe.
“Joni Mitchell may be the most influential female recording artist and composer of the late twentieth century. In Reckless Daughter , the music critic David Yaffe tells the remarkable, heart-wrenching story of how the blond girl with the guitar became a superstar of folk music in the 1960s, a key figure in the Laurel Canyon music scene of the 1970s, and the songwriter who spoke resonantly to, and for, audiences across the country. Reckless Daughter is the story of an artist and an era that have left an indelible mark on American music.” (Syndetics summary)

Maximum volume : the life of Beatles producer George Martin, the early years, 1926-1966 / Kenneth Womack.
“Maximum Volume offers a glimpse into the mind, the music, and the man behind the sound of the Beatles. Martin s working-class childhood, his education, and his musical influences at London s Guildhall School of Music and Drama profoundly shaped his early career in the BBC s Classical Music department and as head of the EMI Group s Parlophone Records. These musical influences would become the fount out of which flowed the genius behind his seven years producing the Beatles incredible body of work, including such albums as Rubber Soul, Revolver, Sgt. Pepper s Lonely Hearts Club Band, and Abbey Road.” (Syndetics summary)

So much things to say : the oral history of Bob Marley / text and photographs by Roger Steffens ; introduction by Linton Kwesi Johnson.
“Roger Steffens is one of the world’s leading Bob Marley experts. He toured with the Wailers in the 1970s and was closely acquainted with Bunny Wailer, Peter Tosh and the rest of the band members. Over several decades he has interviewed more than seventy-five friends, business managers, relatives and confidants–many speaking publicly for the first time. Forty years in the making, So Much Things to Say weaves this rich testimony into a definitive telling of the life of the reggae king–the full, inside account of how a boy from the slums of Kingston, Jamaica, became a cultural icon and inspiration to millions around the world.” (Syndetics summary)

Pop stars in my pantry : a memoir of pop mags and clubbing in the 1980s / Paul Simper.
“Author, columnist and TV writer Paul Simper had a front-row seat at one of pop stardom’s most exciting shows: the 1980s. His memoir, Pop Stars in My Pantry, is an account of a wide-eyed, wet-behind-the-ears lad from Wiltshire landing in London just as the capital’s club scene went into orbit. As a pop writer and fellow clubber, he had unique access to the artists who would become the biggest pop acts of the decade.” (Syndetics summary)

Fearless : the making of post-rock / Jeanette Leech.
“In 1994, the music critic Simon Reynolds coined a new term: post-rock. It was an attempt to give a narrative to music that used the tools of rock but did something utterly different with it, broadening its scope by fusing elements of punk, dub, electronic music, minimalism, and more into something wholly new. Drawing on dozens of new interviews and packed full of stories never before told, Fearless explores how the strands of post-rock entwined, frayed, and created one of the most diverse bodies of music ever to huddle under one name.” (Syndetics summary)

Meet me in the bathroom : rebirth and rock and roll in New York City, 2001-2011 / Lizzy Goodman.
“In this fascinating and vibrant oral history, acclaimed journalist Lizzy Goodman charts New York’s explosive musical transformation in the early 2000s. Drawing on over 200 original interviews, Goodman follows the meteoric rise of the artists that revolutionised the cultural landscape and made Brooklyn the hipster capital of cool–including The Strokes, The Yeah Yeah Yeahs, LCD Soundsystem, Interpol, and Vampire Weekend. Meet Me in the Bathroom is the definitive account of an iconic era in rock-and-roll.” (Syndetics summary)

Uncommon people : the rise and fall of the rock stars / David Hepworth.
“In Uncommon People, David Hepworth zeroes in on defining moments and turning points in the lives of forty rock stars from 1955 to 1995, taking us on a journey to burst a hundred myths and create a hundred more.” (Syndetics summary)