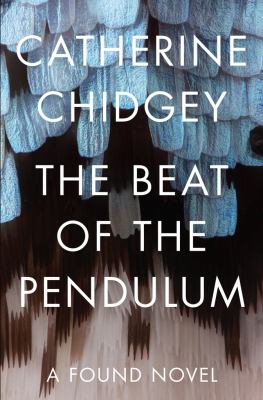 New Zealand writers are the feature of this month’s ‘other genre’ category. Included are the most recent novels from Catherine Chidgey and Catherine Robertson. Also after many years there is a collection of short stories from Laura Solomon that proves to be well worth the wait.

The beat of the pendulum : a found novel / Catherine Chidgey.
“The Beat of the Pendulum is the result of one year in which Chidgey drew upon the language she encountered on a daily basis, such as news stories, radio broadcasts, emails, social media, street signs, TV, and many conversations. As Chidgey filters and shapes the linguistic chaos of her recordings, a set of characters emerge, her family, including her young daughter, and her husband, mother and sister, her friends, and an extended family formed through surrogacy and donation. This is an exploration of human memory, how we acquire it, and how we lose it.” (Adapted from Syndetics summary)

The benefactor / Sebastian Hampson.
“Magazine editor Henry Calder’s ordered life has unraveled. He’s just been ousted from the glamorous job that gave his life meaning, and he lost his wife, Martha, less than a year ago. Then he meets Maggie, a rebellious young artist working as a bartender. When Maggie is evicted, Henry offers her a place to stay. But there is something about the young woman and her work that disturbs him, and before long Henry is facing a crisis neither of them could ever have foreseen.” (Adapted from Syndetics summary)

Beneath pale water / Thalia Henry.
“Set amidst the physical and psychological landscapes of New Zealand’s southern hills and grasslands, Beneath Pale Water is a social realist and expressionistic novel that follows a triangle of three damaged individuals, a sculptor, a vagrant and a model, who have grown calcified shells against the world.” (Adapted from Syndetics summary)

All our secrets / Jennifer Lane.
“A girl called Gracie. A small town called Coongahoola with the dark Bagooli River running through it. The Bleeders, hundreds of ‘Believers’ who set up on the banks of the river, who start to buy up the town and win souls. The River Children, born in the aftermath of the infamous River Picnic. They begin to go missing, one after another. Gracie Barrett is the naively savvy spokesperson for her chaotic family (promiscuous dad, angry mum, twins Lucky and Grub, Elijah the River Child and fervent, prayerful Grandma Bett), for the kids who are taken, for the lurking fear that locks down the town and puts everyone under suspicion. Gracie is funny and kind, bullied and anguished, and her life spirals out of control when she discovers she knows what no one else does: who is responsible for the missing children.” (Adapted from Syndetics summary)

Navigator : a novel / Anne Moir.
“Navigator is the story of Southlander Joe Hassen’s childhood and his service as a navigator in Bomber Command in World War 2. He returns to Dunedin but cannot settle till he solves a mystery about his past. Finally, down a remote back road on the Southland coast, Joe finds an answer that completes the puzzle.” (Adapted from Syndetics summary)

Gabriel’s Bay / Catherine Robertson.
“Kerry Macfarlane has run away from his wedding-that-wasn’t. He lands in coastal Gabriel’s Bay, which bills itself as ‘a well-appointed small town’ on its website (last updated two decades ago). Here Kerry hopes to prove he’s not a complete failure. Or, at least, give his most convincing impression. But Gabriel’s Bay has its own problems, low employment, no tourists, and a daunting hill road between it and civilisation. And Kerry must also run the gauntlet of its inhabitants, Sidney, single mother deserted by a feckless ex; Mac, the straight-shooting doctor’s receptionist; a team of nine-year-olds; a giant restaurateur; and the local progressive association, who’ll debate apostrophe placement until the crack of doom. Can Kerry win their respect, and perhaps even love? Will his brilliant plan to transform the town’s fortunes earn him a lasting welcome in Gabriel’s Bay?” (Adapted from Syndetics summary)

Taking Wainui / Laura Solomon.
“Thirteen stories in this collection show the skill of this gifted playwright, novelist and poet. With much humour, and flight s of fantasy, the stories are imaginative and thought provoking. The main story in the collection Taking Wainui concerns a boy who is the son of a Black Mamba gang leader. It is assumed that he will follow in his father’s footsteps and become a gang member too. However, he meets a lady who works stopping young people getting into gangs. He is given an initiation project of stealing from this lady’s house. She stops him in his tracks and talks him into not stealing from her, but going home to face his father instead.” (Adapted from Syndetics summary)

Nothing bad happens here / Nikki Crutchley.
“The body of missing tourist Bethany Haliwell is found in the small Coromandel town of Castle Bay, where nothing bad ever happens. News crews and journalists from all over the country descend on the small seaside town as old secrets are dragged up and gossip is taken as gospel. Among them is Miller Hatcher, a journalist battling her own demons, who arrives intent on gaining a promotion by covering the grisly murder. Following an anonymous tip, Miller begins to unravel the mystery of the small town. And when another woman goes missing, Miller finds herself getting closer to the truth. But at what cost?” (Adapted from Syndetics summary)