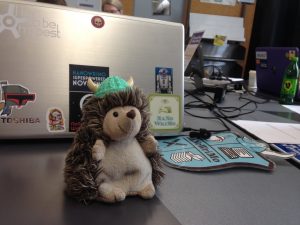 Did you know that during NaNoWriMo this year Wellington City Libraries hosted a Come Write In, where writers could gather each weekend to work on their goal of 50,000 words? Below we have some profiles of these future authors, and if you’d like to join them next year, just sign up to NaNoWriMo. Thanks so much to everyone who came along!

Story: A woman running from her past finds a key hidden behind a picture frame in a hotel room, but what does it unlock?

How have you found NaNoWriMo this year? This year has been a challenge. I got 3,000 words into the novel I was planning to write, then got frustrated with the story, and started a new story from scratch. I may not finish this year, but I’m happy with the plot of the new novel.

Will you do NaNoWriMo again next year? Absolutely. I’ll try to not end up moving house and jobs next November, and see if that means I have more energy to write.

Story: Liz is a newspaper reporter who gets in over her head when she investigates a sunken ship and gets involved with a group of musicians and their ambitions.

How have you found NaNoWriMo this year? It’s flowed well. It’s been very social, which is nice.

Will you do NaNoWriMo again next year? Yes. I might use a similar process of making a plan and then abandoning it, but we’ll see closer to the time. 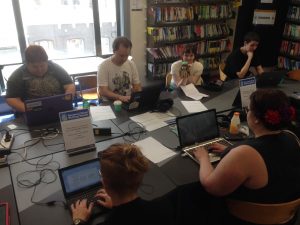 Story: American Idol but there are robotic scorpions and the world is a capitalist hellscape.

How have you found NaNoWriMo this year? I really love the Wellington writing group (I’ve written in the Dunedin and Christchurch groups for NaNo as well and those are great too). Writing with a bunch of other writers around is fantastic for creativity if not for productivity.

Will you do NaNoWriMo again next year? I do NaNo every year (this is my 8th).

Story: The cheesiest romance novel you could possibly imagine – with all the traps!

How have you found NaNoWriMo this year? I’ve been so busy there’s no way I’m going to make 50K! But the meetups have been great and it’s a great group this year. I’ve still got more words than I started with!

Will you do NaNoWriMo again next year? Hopefully! And I’ll make sure November is less busy so I can write more words.

Story: My protagonist is a hedgehog vigilante called ‘The Urchin.’ He is trying to bring down two rival criminal organisations – the Owls and the Foxes – who bring death to the streets and corruption to parliament.

How have you found NaNoWriMo this year? Exhilarating and exhausting. Without the support of your peers, it is easy to burn out in the first week. Like a hedgepig caught in a bonfire.

Will you do NaNoWriMo again next year? I shall. Next year I shall write my memoirs. This is technically referred to as being a “NaNoWriMo Rebel” as it will not be a novel. I embrace the title.