Check out some of these newly catalogued books on movies and TV shows, including the historical side stories of the very popular TV series; Game of Thrones and Doctor Who. A variety of movie guides such as The Bad Movie Bible should not be missed.

You win or you die : the ancient world of Game of Thrones / Ayelet Haimson Lushkov.
“In this essential sequel to Carolyne Larrington’s Winter is Coming: The Medieval World of Game of Thrones, Ayelet Haimson Lushkov explores the echoes, from the Summer Islands to Storm’s End, of a rich antique history. She shows how the wanderings of Tyrion Lannister replay the journeys of Odysseus and Aeneas. She suggests that the War of the Five Kings resembles the War of the Four Emperors (68-69 AD). She also demonstrates just how the Wall and the Wildlings advancing on it connect with Hadrian’s bulwark against fierce tribes of Picts. This book reveals the remarkable extent to which the entire Game of Thrones universe is animated by its ancient past.” (Syndetics summary)

BBC Doctor Who : a brief history of Time Lords / Steve Tribe ; original illustrations by Richard Shaun Williams ; design by Richard Atkinson.
“Doctor Who: A Brief History of Time Lords tells the story of all of this ancient, legendary civilization, of notable historical figures, of Gallifrey itself, of the Time War and much more. The planet Gallifrey. The Shining World of the Seven Systems. Often to be found in the constellation of Kasterborous. Birthplace of one of the oldest civilizations in the universe: The Time Lords. Featuring full-color, never-before-seen illustrations and a beautiful interior design, this is a highly collectible in-world companion no Whovian can be without.” (Syndetics summary) 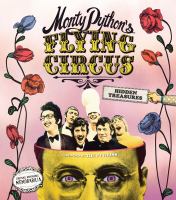 Monty Python’s Flying Circus : hidden treasures / Adrian Besley ; foreword by The Pythons ; artwork by Terry Gilliam.
“This is the story of Monty Python, one the most popular and influential forces in modern comedy–and of their TV show–told in words and images. This celebratory book includes 22 facsimiles of rare memorabilia from their official archives, including hand-scribbled scripts, cue sheets, character lists, posters, and animation artwork. Written with active input from the Pythons themselves, the book recounts the adventures of all six members and their TV show, from early days in the Cambridge Footlights through early appearances on the BBC, global stardom, the inevitable fights, and their triumphant reunions.” (Syndetics summary)

Talking pictures : how to watch movies / Ann Hornaday.
“In Talking Pictures, veteran film critic Ann Hornaday walks us through the production of a typical movie-from writing the script and casting to the final sound edit-and explains how to evaluate each piece of the process. How do we know if a film is well-written, above and beyond snappy dialogue? What constitutes a great screen performance? What goes into praiseworthy cinematography, editing, and sound design? And what does a director really do? Full of engaging anecdotes and interviews with actors and filmmakers, Talking Pictures will help us see movies in a whole new light-not just as fans, but as film critics in our own right.” (Syndetics summary) 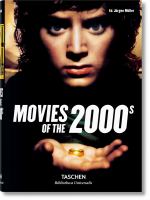 Movies of the 2000s / ed. Jürgen Müller.
“Through the gripping stories, insightful dramas, and thrilling, mindless escapism, Movies of the 2000s gathers the best of the best round the globe, from the blockbuster Harry Potter and The Lord Of The Rings installments to cult classics Lost in Translation, Inglourious Basterds, and No Country For Old Men, The Lives of Others, and Y Tu Mama Tambien. Each movie masterpiece is profiled with stills and production photos, a synopsis, analysis, and movie-buff trivia, as well as cast, crew, and technical listings.” (Syndetics summary) 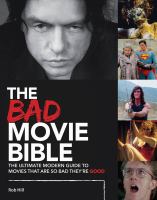 The bad movie bible / Rob Hill.
“Most movies aren’t very good. That shouldn’t be a surprise to anyone. But nor should it be a surprise that some are so bad they possess a unique appeal arising specifically from their inadequacies. This book is a celebration of, and guide to, those movies.
– Analysis and reviews of 101 of the best good-bad movies of the last fifty years
– Exclusive interviews with heroes and villains
– First-hand accounts from genre legends who explain what went wrong, and why it isn’t their fault
– Unique behind-the-scenes images
– Future classics are exposed, old mysteries solved
Whether you realize it or not, you probably enjoy bad movies.” (Syndetics summary)

Anne Bancroft : a life / Douglass K. Daniel.
“In the first biography to cover the entire scope of Bancroft’s life and career, Douglass K. Daniel brings together interviews with dozens of her friends and colleagues, never-before-published family photos, and material from film and theater archives to present a portrait of an artist who raised the standards of acting for all those who followed. Daniel reveals how, from a young age, Bancroft was committed to challenging herself and strengthening her craft. Her talent (and good timing) led to a breakthrough role in Two for the Seesaw, which made her a Broadway star overnight. The book offers new insights into the life and career of a determined actress who left an indelible mark on the film industry while remaining true to her art.” (Syndetics summary)