A variety of new books on movies and TV programmes have been added to our collection recently. They include the intriguing study about movies adapted from comics (and vice versa) and the history of Wellington summer Shakespeare. See also the fascinating biographies of Charlotte Rampling and Ava Gardner.

Who I am / Charlotte Rampling ; with Christophe Bataille ; translated from the French by William Hobson with Charlotte Rampling.
“Oscar-nominated Charlotte Rampling most recently appeared in hit ITV drama Broadchurch, the BBC’s London Spy and HBO’s Dexter, and the feature film 45 Years. Having shied away from biographies and autobiographies (“too personal”) Rampling has now written Who I Am (first published in French) a lyrical, and intimate self-portrait via reminiscences. Written in a style that gives a unique insight into her screen persona, it is an idiosyncratic and beguiling insight of one of the most consistently adventurous and interesting actors.” (Syndetics summary)

Kirk and Anne : letters of love, laughter, and a lifetime in Hollywood / Kirk and Anne Douglas ; with Marcia Newberger.
“Film legend Kirk Douglas and Anne Buydens, his wife of nearly sixty-three years, look back on a lifetime filled with drama both on and off the screen. Sharing priceless correspondence with each other as well as the celebrities and world leaders they called friends, Kirk and Anne is a candid portrayal of the pleasures and pitfalls of a Hollywood life lived in the public eye.” (Syndetics summary) 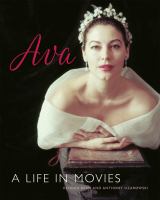 Ava : a life in movies / Kendra Bean and Anthony Uzarowski.
“Renowned for her screen performances, down-to-earth personality, and love affair with Frank Sinatra, Ava Gardner left an indelible mark on Hollywood history. Her adventurous life story is told through authoritative text and hundreds of photos in Ava: A Life in Movies.” (Syndetics summary)

Jean Renoir : a biography / Pascal Mérigeau ; translated by Bruce Benderson ; foreword by Martin Scorsese.
“Originally published in France in 2012, Pascal Merigeau’s definitive biography of legendary film director Jean Renoir is a landmark work–the winner of a Prix Goncourt, France’s top literary achievement. Now available in the English language for the first time, Jean Renoir: A Biography is the definitive study of one of the most fascinating and creative artistic figures of the twentieth century.” (Syndetics summary)

T2 trainspotting / screenplay by John Hodge ; based on the books Porno and Trainspotting by Irvine Welsh.
“First there is an opportunity, then there is a betrayal. Twenty years have gone by. Much has changed but just as much remains the same. Mark Renton returns to the only place he can ever call home. They are waiting for him, of course: Spud, Sick Boy, and Frank Begbie. But they are not alone. Other old friends are waiting too: sorrow, loss, joy, vengeance, hatred, friendship, love, longing, fear, regret, diamorphine, self-destruction and mortal danger, they are all lined up to welcome him, ready to join the dance. Mark Renton returns, to the chaos of life and death.” (Syndetics summary)

Movie comics : page to screen/screen to page / Blair Davis.
“Adaptations of comics have been an integral part of American cinema from its very inception, with comics characters regularly leaping from the page to the screen and cinematic icons spawning comics of their own. Movie Comics is the first book to study the long history of both comics-to-film and film-to-comics adaptations, covering everything from silent films starring Happy Hooligan to sound films and serials featuring Dick Tracy and Superman to comic books starring John Wayne, Gene Autry, Bob Hope, Abbott & Costello, Alan Ladd, Dean Martin and Jerry Lewis.” (Syndetics summary)