A wide range of books from the history of the iconic magazine Rolling Stone to the study of film music to the biography of Tony Bennett have been added to our catalogue. From Cradle to Stage highlights the mothers of rock stars and makes for an intriguing read. Check them out! 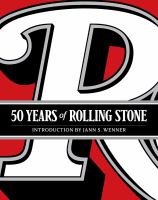 50 years of Rolling stone / introduction by Jann S. Wenner ; edited by Jodi Peckman and Joe Levy ; design director, Joseph Hutchinson.
“For the past fifty years, Rolling Stone has been a leading voice in journalism, cultural criticism, and–above all–music. This landmark book documents the magazine’s rise to prominence as the voice of rock and roll and a leading showcase for era-defining photography. From the 1960s to the present day, the book offers a decade-by-decade exploration of American music and history. This book is an irresistible and essential keepsake of the magazine that has defined American music for generations of readers.” (Adapted from Syndetics summary) 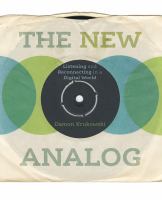 The new analog : listening and reconnecting in a digital world / Damon Krukowski.
“Having made his name in the late 1980s as a founding member of the indie band Galaxie 500, Damon Krukowski has watched cultural life lurch from analog to digital. And as an artist who has weathered the transition, he has challenging, urgent questions for both creators and consumers about what we have thrown away in the shift to a digital society: Are our new streaming services undermining our ability to incubate new talent? Krukowski gives us a brilliant meditation and guide to keeping our heads amid the digital flux, and for plugging in without tuning out.” (Adapted from Syndetics summary)

Experiencing film music : a listener’s companion / Kenneth LaFave.
“Of all the elements that combine to make movies, music sometimes seems the forgotten stepchild. Yet it is an integral part of the cinematic experience. Minimized as mere “background music,” film scores enrich visuals with emotional mood and intensity, underscoring directors’ intentions, enhancing audiences’ reactions, driving the narrative forward, and sometimes even subverting all three. In Experiencing Film Music: A Listener’s Companion, Kenneth LaFave guides the reader through the history, ideas, personalities, and visions that have shaped the music we hear on the big screen.” (Adapted from Syndetics summary)

From cradle to stage : stories from the mothers who rocked and raised rock stars / Virginia Hanlon Grohl.
“While the Grohl family had always been musical, Virginia never expected her son to become a musician, let alone a rock star. But when she saw him perform in front of thousands of screaming fans for the first time, she knew that rock stardom was meant to be for her son. Virginia decided to seek out other rock star mothers to ask these questions, and so began a two-year odyssey in which she interviewed such women as Verna Griffin, Dr. Dre’s mother; Marianne Stipe, Michael Stipe of REM’s mother etc. With exclusive family photographs and a foreword by Dave Grohl, From Cradle to Stage will appeal to mothers and rock fans everywhere.” (Syndetics summary)

The rise, the fall, and the rise / Brix Smith Start.
“The Rise, The Fall, and The Rise is the extraordinary story, in her own words, of Brix Smith Start. Best known for her work in The Fall at the time when they were perhaps the most powerful and influential anti-authoritarian postpunk band in the world, Brix spent ten years in the band before a violent disintegration led to her exit and the end of her marriage with Mark E Smith. But Brix’s story is much more than rock ‘n’ roll highs and lows in one of the most radically dysfunctional bands around. Too bizarre, extreme and unlikely to exist in the pages of fiction, The Rise, The Fall, and The Rise could only exist in the pages of a memoir.” (Syndetics summary)

Just getting started / Tony Bennett with Scott Simon.
“At ninety, musician and singer Tony Bennett is as vibrant and productive as ever. In addition to his prodigious musical output, including albums, concerts, and personal appearances, this beloved and enduring artist has written his next book. In 2012’s Life Is a Gift, Tony reflected on the lessons he has learned over the years. Now, in Just Getting Started, he pays homage to the remarkable people who inspired those lessons.” (Syndetics summary)

Shirley Bassey : diamonds are forever : a celebration of my 50 years as her greatest fan / Mary Long.
“Dame Shirley Bassey has become one of the most prestigious singers of her time. Her work has inspired and influenced many, and will no doubt continue to do so for generations to come. Diamonds Are Forever is the fascinating story of Shirley Bassey told from the perspective of one her greatest fans. Mary Long first met Bassey in 1963 and since then has encountered her hundreds of times, thus developing a unique insight into the life of one of our most iconic singers.” (Syndetics summary)

Don’t you leave me here : my life / Wilko Johnson.
“They told me the cancer was incurable and terminal. I felt absolutely calm… I felt free. Free from the future and the past.
In 2013, Dr Feelgood founder, Blockheads member and musical legend Wilko Johnson was diagnosed with terminal cancer. With ten months to live, he decided to accept his imminent death and went on the road. His calm, philosophical response made him even more beloved and admired. And then the strangest thing happened: he didn’t die. Don’t You Leave Me Here is the story of his life in music, his life with cancer, and his life now – in the future he never thought he would see.” (Syndetics summary)

Substance : inside New Order / Peter Hook.
“In this final installment of his internationally bestselling three-part memoir, British rocker Peter Hook focuses on the 1980s New Wave and Dance Punk scene and the rise of one of the most influential bands of the Second British Invasion: New Order. 1980. Resurrected from the ashes of Joy Division after the suicide of its lead singer, Ian Curtis, New Order would become one most critically acclaimed and important bands of the decade and beyond.” (Syndetics summary)

Infinite Tuesday : an autobiographical riff / Michael Nesmith.
“Michael Nesmith’s eclectic, electric life spans his star-making role on The Monkees, his invention of the music video, and his critical contributions to movies, comedy, and the world of virtual reality. Above all, his is a seeker’s story, a pilgrimage in search of a set of principles to live by. This funny, thoughtful, self-aware book is a window onto an unexpected life, inflected at every turn by the surprising candor and absurdist humor of an American original.” (Syndetics summary)