This month, discover Paris and London in very different ways. Janice MacLeod’s A Paris Year is a love letter to Paris (in illustrations and words) through the eyes of an artist. On the flip side, Streets of London : the story behind London’s most famous streets takes a layered approach, uncovering some of London’s fascinating back doubles and alleyways, often passed by and ignored.

In a month of contrasts and different approaches, we also feature two books about Antarctica.  Philip Samartzis, author of  Antarctica: An Absent Presence, travelled south with the Australian Antarctic Division on several occasions and his recordings of the unique sounds of Antarctica have been used to create soundscape compositions which wrap around the words and images in this book. The flip side here is a personal narrative leading towards the icy continent from rural America, in Andrew Evans’s The Black Penguin.

Finally we have a literary bent, with the collection of New York Times columns in Footprints examining the locations that influenced famous writers, and The Writer Abroad featuring the actual travel writing of some of the greats. 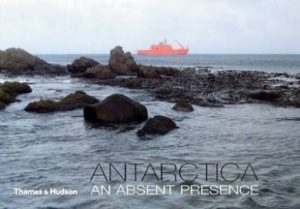 Antarctica : an absent presence / Philip Samartzis.
“This beautiful volume of soundscape compositions, images and words from Philip Samartzis is an invitation to share in a remarkable journey of enquiry. Antarctica is a paradox of the sublime and prosaic: with its vast expanses of ice, snow and mountains and traces of human habitation, from weathered huts to abandoned machinery. Samartzis travelled south with the Australian Antarctic Division on several occasions and his recordings of the unique sounds of Antarctica have been used to create soundscape compositions which are meticulously realised on three CDs of the music included in this book.” (Fishpond.co.nz)

A Paris year : my day-to-day adventures in the most romantic city in the world / Janice MacLeod.
“Part memoir and part visual journey, A Paris Year chronicles, day by day, one woman’s French sojourn in the world’s most beautiful city. Beginning on her first day in Paris, Janice MacLeod began a journal recording in illustrations and words, nearly every sight, smell, taste, and thought she experienced in the City of Light. The end result is more than a diary: it’s a detailed and colorful love letter to one of the most romantic and historically rich cities on earth. Combining personal observations and anecdotes with stories and facts about famous figures in Parisian history, this visual tale of discovery, through the eyes of an artist, is sure to delight, inspire, and charm.” (Abridged from Syndetics summary)

The black penguin / Andrew Evans.
“A devout young boy in rural Ohio, Andrew Evans had his life mapped for him: baptism, mission, Brigham Young University, temple marriage, and children of his own. But as an awkward gay kid, bullied and bored, he escaped into the glossy pages of National Geographic and the wide promise of the world atlas. Ejected from church and shunned by his family as a young man, Evans embarks on an ambitious overland journey halfway across the world. Riding public transportation, he crosses swamps, deserts, mountains, and jungles, slowly approaching his lifelong dream and ultimate goal: Antarctica. Evans’s 12,000-mile voyage becomes a soulful quest to balance faith, family, and self, reminding us that, in the end, our lives are defined by the roads we take, the places we touch, and those we hold nearest.” (Abridged from Syndetics summary) 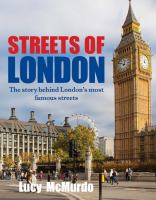 Streets of London : the story behind London’s most famous streets / Lucy McMurdo.
“With a history going back 2000 years it is hardly surprising that so many of London’s streets are known throughout the globe. Even today several Roman roads pass through the capital, and London’s financial center, The City of London, is full of winding alleys and ancient ways with names from times gone by. Author Lucy McMurdo encourages you to turn off the main trail and discover more of London’s fascinating back doubles and alleyways, so often passed by and ignored.” (Abridged from Syndetics summary)

Tourist trains guidebook / [from the publishers of Trains magazine ; editor: Randy Rehberg].
“Tourist Trains Guidebook, Sixth Edition describes 500 of the most popular train attractions, museums, and railroad vacation destinations in the U.S. and Canada. A unique travel guide that appeals to train buffs, individuals interested in historic trains and sites, and families looking for kid-friendly vacations. The digest book size offers a portable format that fits inside a backpack or tote. As passenger train travel enjoys a real renaissance today, a comprehensive railroad travel guide will be a valuable addition to your product line.” (Abridged from Syndetics summary)

Footsteps : from Ferrante’s Naples to Hammett’s San Francisco : literary pilgrimages around the world / The New York Times ; introduction by Monica Drake.
“Based on the popular New York Times travel column, Footsteps is an anthology of literary pilgrimages, exploring the geographic muses behind some of history’s greatest writers. From the “dangerous, dirty and seductive” streets of Naples, the setting for Elena Ferrante’s famous Neapolitan novels, to the “stone arches, creaky oaken doors, and riverside paths” of Oxford, the backdrop for Alice’s adventures in Wonderland, Footsteps takes a fresh approach to literary tourism, appealing to readers and travel enthusiasts alike.” (Abridged from Syndetics summary)

The writer abroad : literary travels from Austria to Uzbekistan / selected by Lucinda Hawksley.
“From the grand tour to the global village, novelists and poets have made particularly observant travelers. Many writers have been prone to wanderlust, eager to explore the world and draw inspiration from their travels. They recorded their notes in letters, journals, essays and books. This collection takes us on a literary journey around the world, through extracts from Arthur Conan Doyle in Australia, Aldous Huxley in India, Charles Dickens in Italy, Henry James in France, Mary Wollstonecraft in Sweden, and many more.” (Abridged from Syndetics summary) 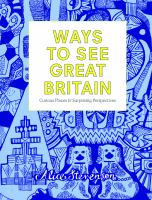 Ways to see Great Britain : curious places & surprising perspectives / text and illustrations by Alice Stevenson.
“Driven by curiosity, restlessness and a desire to better understand her own country, artist Alice Stevenson spent two years exploring and drawing Great Britain. With an eye for the odd and an antenna for the unexpectedly beautiful, she documented her slow, attentive forays. The result is a book celebrating detail, of landscape and architecture, and creativity, an essential human urge. A rich, artistic journey through a land deep in natural and man-made puzzles and wonders.” (Abridged from Syndetics summary)