New Zealand writers are featured in this month’s ‘Other Genres’ category. This selection highlights the diversity of subject and genres in New Zealand fiction, from historical to science fiction, romance to biographical, horror to contemporary New Zealand life. Highly recommended, both historical, are Heloise by Mandy Hager, her first adult novel and Through the Lonesome Dark by much acclaimed writer Paddy Richardson.

The Nam legacy : a novel / Carole Brungar.
“The Nam Legacy is an epic love story set during the ’60s and ’70s. When the Rolling Stones and Jefferson Airplane drove parents crazy, teenagers found sexual freedom and peace slogans covered placards. When Vietnam abducted the nation’s young men and sent them to fight in New Zealand’s most controversial campaign. After 18 months in Vietnam, New Zealand soldier Jack Coles thought killing others to stay alive would be the hardest thing he would ever have to live with. He was wrong. Although the nightmare of what he saw and did still haunts him constantly, what tortures him the most is what he has left behind.” (Adapted from Syndetics summary)

The last McAdam / Holly Ford.
“This romantic, irresistibly entertaining novel tells the story of Tess Drummond, who’s been sent to turn around the fortunes of a remote sheep and cattle station her employer has taken over. What Tess hasn’t counted on is coming up against the station’s handsome and charismatic head stockman, Nate McAdam, whose family owned the property for generations.” (Adapted from Syndetics summary)

Heloise / Mandy Hager.
“What happens when the 12th century’s most famous French lovers are caught in the crossfire of factions, religious reform and zealotry? Heloise has an exceptional mind. In her determination to pursue learning rather than marriage or life as a cloistered nun, her path inevitably crosses with Peter Abelard, the celebrity philosopher, theologian and master at Paris’ famed Cathedral School. When two such brilliant minds meet and engage, sparks are likely to fly. But theirs is an impossible love. At a time when the Gregorian Reforms are starting to bite and celibacy among the clergy and church officials is being rigorously imposed, these two embark on an affair that will see their lives forever changed.” (Adapted from Syndetics summary)

Empress of the fall / David Hair.
“Emperor Constant is dead and his rivals are scrabbling for power, but any misstep could plunge the land, already devastated by the shocking outcome of the Third Crusade, into a calamitous civil war. The Imperial throne is not the only one in jeopardy. Two brothers, imprisoned veterans of the Crusades, finally return home to find their father’s kingdom being plundered but the price of regaining their birthright will have far-reaching implications for the entire empire.” (Adapted from Syndetics summary)

Good sons : a novel of the Great War / Greg Hall
“In early 1914 Frank Wilson and his two close friends, Tom Davis and Robert Sutherland, are growing up in Oamaru in the South Island of New Zealand. The coming war in Europe arouses the hopes and dreams of a generation of young men. The pressure becomes irresistible and one by one the boys become soldiers. Frank delays his decision but in 1916 a strange encounter shocks him into enlisting. After a rapid coming-of-age in the training camps of the North Island the novel moves to France. A reunion, the insanity of a love affair in the midst of a terrible war and a brutal event set Frank on course for the best and worst days of his young life.” (Adapted from Syndetics summary)

Into the mist / Lee Murray.
“When New Zealand Defense Force Sergeant Taine McKenna and his squad are tasked with escorting a bunch of civilian contractors into Te Urewera National Park, it seems a strange job for the army. Militant Tahoe separatists are active in the area, and with its cloying mist and steep ravines, the forest is a treacherous place in winter. Yet nothing has prepared Taine for the true danger that awaits them. They backtrack toward civilization, stalked by a prehistoric creature intent on picking them off one by one. With their weapons ineffective, the babysitting job has become a race for survival.” (Adapted from Syndetics summary)

The suicide club / Sarah Quigley.
“When Bright is suddenly catapulted to fame, he can’t cope with the pressure. He decides to end it all by jumping from the 20th floor of a high-rise on his twentieth birthday. He’s saved by the quirky, eccentric Gibby, and soon the two boys find themselves in a love triangle, vying for the attention of the beautiful, brilliant, unreachable Lace, and also trying to protect her from harm. The three misfits, close to genius, close to the brink, travel from England to a beautiful old spa town in Bavaria. Here, in an experimental institution under the colourful Dr Geoffrey, the pressure mounts. Soon it’s no longer clear who’s in the greatest danger and who needs saving the most.” (Adapted from Syndetics summary)

Through the lonesome dark / Paddy Richardson.
“Blackball, West Coast, pre-World War I. For three youngsters; Pansy, Clem and Otto, life had an idyllic surface with a far from idyllic underside in this mining town. As a World War approaches, the harsh realities become apparent, just because you are smart and motivated there is no certainty that you can advance yourself in this world, especially if you are a girl. With a light hand on a dark time in history, Paddy Richardson navigates the territory between.” (Adapted from Syndetics summary)

The insides of banana skins / Jane Seaford.
“Sukey, seventeen, lost and uncertain, shares a crowded, shabby flat with Kitty, who becomes a stripper, with Malc, a drug dealer, and Jaz, a drama student with sexual identity issues. Bridie, who lives downstairs, sells sex to support her two kids This is Sukey’s story, told from her point of view, about a young girl in a strange world and how she gradually learns to live in it.” (Adapted from Book cover) 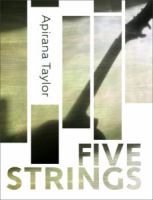 Five Strings / Apirana Taylor.
“Mack is a larger-than-life street philosopher and Puti’s a former gang member looking for something more. Together they’re at the bottom of the heap. They live out their lives in a haze of smoke and alcohol, accompanied by a host of other characters scraping by on the fringes of society. Will any of them be redeemed?” (Adapted from Syndetics summary)

Southern gold : survival and desire in a raw new land / Jude Thomas.
“Set in Dunedin and Central Otago during the gold rush period, from 1858 to1876. The story revolves around an illegitimate baby who is found on the road and brought up in the notorious community of Maclaggan Street. She grows into a singular girl, and into a young woman to be reckoned with. This is the story of courage and love against the odds.” (Adapted from Syndetics summary)