Some fascinating studies have been added to our book collection on popular music. They include You Say You Want a Revolution? which is an intriguing study about the counter-culture of late 60s, How to Make It in the New Music Business, and Bad Singer which deals with the science of tone deafness. Also, check out these popular biographies of Adele and Jimmy Page. 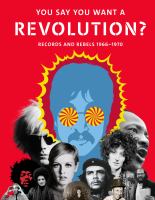 You say you want a revolution? : records and rebels, 1966-1970 / edited by Victoria Broackes and Geoffrey Marsh.
“The late 1960s were a period of great turbulence and rapid social and political change. You Say You Want a Revolution? examines that moment when youth culture drove an optimistic idealism, motivating people to come together and question established power structures across every area of society. It shows how many of the issues that dominate contemporary discourse environmentalism, globalization, individualism or mass-communication – have roots that can be traced back to the 1960s. Half a century later, we can reassess the genesis of these movements and explore whether the revolutions they started can be considered complete, ongoing or interrupted.” (Syndetics summary)

The music of the future / Robert Barry.
“The Music of the Future is not a book of predictions or speculations about how to save the music business or the bleeding edge of technologies. Rather, it is more like a history of failures, mapping 200 years of attempts by composers, performers and critics to imagine a future for music. Encompassing utopian dream cities, temporal dislocations and projects for the emancipation of all sounds, The Music of the Future is finally a sort of call to arms for everyone engaged in music: to fail again, fail better.” (Adapted from amazon.co.uk) 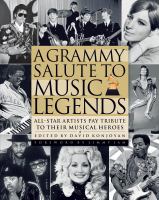 A Grammy salute to music legends : all-star artists pay tribute to their musical heroes / edited by David Konjoyan ; foreword by Jimmy Jam.
“Each year, The Recording Academy (the organization behind the Grammy Awards) honors a handful of musical giants through its Special Merit Awards, and each year the music-making community are invited to write heartfelt tributes to the honorees. Sometimes the relationship is obvious (Quincy Jones honoring Michael Jackson), and sometimes the influence is more indirect (Queen’s Brian May paying tribute to Doris Day or Patti Smith writing on Jefferson Airplane). This captivating book gathers nearly 20 years worth of these sometimes touching, sometimes humorous, always inspiring essays.” (amazon.com)

Anatomy of a song : the oral history of 45 iconic hits that changed rock, R & B and pop / Marc Myers.
“Believing that every great song has a fascinating backstory, Myers brings to life five decades of music through oral histories of forty-five transformative songs woven from interviews with the artists who created them. From “Lawdy Miss Clawdy” by Lloyd Price to “Losing my religion” by R.E.M., leading artists reveal the emotions, inspirations, and techniques behind their influential works. The result is a love letter to the songs that have defined generations.” (Syndetics summary)

How to make it in the new music business : practical tips on building a loyal following and making a living as a musician / Ari Herstand.
“In the last decade, no industry has been through as much upheaval and turmoil as the music industry. It is a democratic, “DIY” business and any guide to success in these new waters must be told by someone who has survived them. Ari Herstand’s How to Make It in the New Music Business is not only a brilliantly compiled tutorial on how to accomplish specific tasks routing a tour, negotiating contracts, getting paid for streamed plays or licensing music but also a manifesto, encouraging musicians to pave their own path.” (adapted from amazon.co.uk)

Bad singer : the surprising science of tone deafness and how we hear music / Tim Falconer.
“In the tradition of Daniel Levitin’s This Is Your Brain on Music and Oliver Sacks’ Musicophilia, Bad Singer follows the delightful journey of Tim Falconer as he tries to overcome tone deafness–and along the way discovers what we’re really hearing when we listen to music. A work of scientific discovery, musicology, and personal odyssey, Bad Singer is a fascinating, insightful, and highly entertaining account from an award-winning journalist and author.” (Provided by publisher)

Jazz : a beginner’s guide / Stuart Nicholson.
“Jazz: a beginner’s guide is a lively and highly accessible introduction to a global musical phenomenon. Award-winning music journalist and author Stuart Nicholson takes the reader on an entertaining journey from jazz’s early stirrings in America’s south through to the present day, when almost every country in the world has its own vibrant jazz scene. Along the way we meet a host of jazz heroes past and present, from Louis Armstrong, Benny Goodman and Miles Davis, to Keith Jarrett and Kamasi Washington. Each chapter is accompanied by a playlist designed to provide a stimulating and enjoyable entry point to what has been described as the most exciting art form of all.” (Page 4 of cover)

Adele / Sean Smith.
“Adele touches the hearts of millions of people who love her for her music and share the real and honest emotion she brings to each and every song. In a cynical age, she is a phenomenon.” (Syndetics summary)

No quarter : the three lives of Jimmy Page / Martin Power.
“A genuine musical legend, Jimmy Page was the mastermind behind Led Zeppelin, among the most successful bands in the history of rock ‘n’ roll. As their leader, producer, principal songwriter and guitarist, Page not only shaped the sound of seventies hard rock but also created a musical and artistic legacy that stands him proudly to this day. Researched through numerous interviews with colleagues and friends from the sixties to the present day, No Quarter also casts light on one of rock’s most mysterious figures, delving into Jimmy’s interests in alternative religions and philosophies and his life after the Led Zeppelin bubble burst, and telling the full story of a man many believe to be “the greatest guitarist in the greatest rock band in history.” (Adapted from dust jacket)