Fresh off the printing press is a guide-book to Martin Luther’s Reformation locations, an introduction to a Buddhist approach to economics, and two books of special interest to Jewish readers.

Muslim integration : pluralism and multiculturalism in New Zealand and Australia, edited by Erich Kolig and Malcolm Voyce.
This collection discusses the future of religio-cultural pluralism, multicultural policies, and the growing demands for greater emphasis on assimilation. Contributors examine issues such as parallel societies, Islamophobia, radicalization, tolerance, adaptation and mutual adjustment, legal pluralism, the role of mosque architecture, and media depictions of Muslims are examined. (Drawn from publisher’s summary)

The Islamic Jesus : how the King of the Jews became a prophet of the Muslims, by Mustafa Akyol.
“Akyol exposes an extraordinary historical connection between Judaism, Jewish Christianity and Islam–a major mystery unexplored by academia. From Jesus’ Jewish followers to the Nazarenes and Ebionites to the Qu’ran’s stories of Mary and Jesus, The Islamic Jesus will reveal links between religions that seem so contrary today.” (drawn from the Syndetics summary)

Buddhist economics : an enlightened approach to the dismal science, by Clair Brown.
Traditional economics measures the ways in which we spend our income, but doesn’t attribute worth to the crucial human interactions that give our lives meaning. Clair Brown, an economics professor at U.C. Berkeley and a practicing Buddhist, has developed a holistic model, which emphasises interdependence, shared prosperity, and happiness into her vision for a sustainable and compassionate world. This leads us to think mindfully as we go about our daily activities, and offers a way to appreciate how our actions affect the well-being of those around us.

An atheist and a Christian walk into a bar… : talking about God, the universe, and everything, by Randal Rauser and Justin Schieber.
“Theology professor Rouser and YouTube personality Schieber offer complex, rigorous arguments that will challenge the thinking of believers and atheists alike…. They argue about whether testimony is valid evidence, what the major theological disagreements between religions suggest, what the creator’s seeming hostility to the universe means, whether the neat mathematical pattern of the universe proves intentional design, and how to best explain the problem of human suffering…” (From Publisher Weekly courtesy of Syndetics)

The story of Hebrew, by Lewis Glinert.
Although found in the language section, this book will be of interest to religious scholars. It shares the history of the development of the Hebrew language until modern times, as well as how religions have imbued it with rich symbolic power.

The genius of Judaism, by Bernard-Henri Lévy ; translated by Steven B. Kennedy.
Chapter headings include : The strength of the Jews ; Jewish France ; How modern Judaism abolished the idea of revolution ; The temptation of Nineveh. What does it mean to be a Chosen People? ; Thus spake Jonah ; The Ninevites of Ukraine and Libya ; Does God arrive as an idea or through faith?

Making sense of God : an invitation to the skeptical, by Timothy Keller.
Timothy Keller invites skeptics to consider that as human beings, we cannot live without meaning, satisfaction, freedom, identity, justice, and hope. Christianity provides us with unsurpassed resources to meet these needs. Written for both the ardent believer and the skeptic, Making Sense of God shines a light on the profound value and importance of Christianity in our lives. (Drawn from the publisher’s summary)

Martin Luther’s travel guide : 500 years of the ninety-five theses : on the trail of the Reformation in Germany, by Cornelia Dömer.
It’s often quite fun to set yourself a mission when travelling. If you’re planning a European trip, here’s an opportunity to make that mission places connected to Martin Luther – each town, castle, and church where the famed German preached, spoke ….. or fought. Travelers will find information on the historic towns of Dresden, Eisleben, Erfurt, Gotha, Leipzig, Lutherstadt Wittenberg, Weimar, and Worms. Also includes stories about Luther’s life and work as well as maps, and timelines.

Live better : a book of spiritual guidance, by Sophie Golding.
“Your spiritual journey can take many forms, and it’s important to choose the path that’s right for you. This handbook will introduce you to traditions and practices with the power to open your heart and broaden your mind. Along with practical tips and enlightening quotes, the insights here are stepping stones towards a better life.” (Syndetics summary) 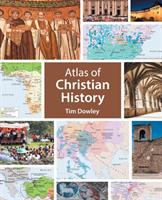 Atlas of Christian history, by Tim Dowley ; cartographer, Nick Rowland.
“Concise, helpful text, written by acknowledged authorities, guide the experience and interpret the visuals. … The atlas is broken into five primary parts that correspond well to most major introductions to the topic. The final section on the modern era pays significant attention to the growth of Christianity as a global religion. Extensive maps are provided that illuminate Christianity in Asian, African, and Latin American contexts.” (drawn from the Publisher’s description).