This week among the new additions we found these interesting gems. 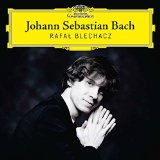 Rafał Blechacz, Johann Sebastian Bach.
“Rafał Blechacz, ‘a superlative pianist’ (BBC Music Magazine), further demonstrates his versatility in his first album devoted to Bach. Among the highlights of his wide-ranging programme are the Italian Concerto, one of Blechacz’s signature pieces (‘His reading was, above all, a model of textural transparency’ – Portland Press Herald), and the Partita No. 1 (‘It was immediately clear from the first sweet, liquid notes that Blechacz is a musician in service to the music, searching its depths, exploring its meaning and probing its possibilities’ – Washington Post)” (cover). 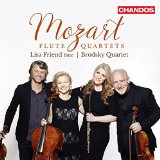 Flute Quartets, Mozart. Performed by the Brodsky Quartet and Lisa Friend.
“Members of the Brodsky Quartet meet the internationally famous flautist Lisa Friend in an album of key works of the flute repertoire: Mozart’s flute quartets. Highly praised for previous recordings, her own compositions, solo recitals in Europe, the US, and Asia, as well as appearances with prestigious orchestras, Lisa Friend devotes her very first recording on Chandos to witty, colorful interpretations or Mozart. The flute quartets of Mozart are central to the classical flute repertoire – and deservedly so: the composer’s characteristic charm, wit, beauty, and elegance are in evidence throughout” (amazon.com). 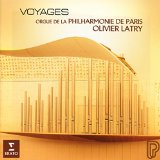 Voyages: Orgue de la Philharmonie de Paris. Performed by Olivier Latry.
Organ compilations are unique in that they are a recording of a specific instrument installed in a specific space. Olivier Latry says, “A space within a space, bonded for all time with the environment in which it is housed, the inherent rapport between the organ which we are about to hear and its surroundings means that it is without a shadow of doubt the soul of the Philharmonie. May the listener relax and be transported to rediscover universal music illuminated by an instrument with so many attributes” (cover). 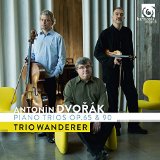 Piano Trios Op. 65 & 90, Dvořák. Performed by Trio Wanderer.
“The Trio Wanderer pays tribute to Dvořák and his last two trios, including the rarely played no. 3 in F minor, heartfelt and sombre. The famous Dumky Trio… opens this new recording. Passionate and melancholy by turns, it is also the most innovative and the freest of Dvořák’s trios…” (cover).