Katherine Mansfield is New Zealand’s best known writer, but it’s for her short stories we remember her. It now emerges that she was a significant poet too. Claire Davison has arranged the poems chronologically in a beautiful little book so that we can chart her development, her experimentation with different forms and see the themes which preoccupied her throughout her writing life.
At the other end of the spectrum are two amusing little books, one of limericks written by Michael Palin and the other an imaginary look at what celebrities might carry in their handbags.

The collected poems of Katherine Mansfield / edited by Gerri Kimber & Claire Davison.
“This edition is made up of 217 poems, ordered chronologically, so that the reader can follow Mansfield’s development as a poet and her experiments with different forms, as well as tracing the themes – love and death, the natural world and the seasons, childhood and friendship, music and song – that preoccupied her throughout her writing life.” (Syndetics summary)

A sackful of limericks / Michael Palin ; illustrated by Tony Ross.
“If you’ve ever wondered what happened to the young fellow from Malta who bought his grandfather an altar … If you’re concerned about the camper called Jack who found a huge snake in his pack … And if you suspect that an eccentric landowner called Grey spent Christmas a very strange way but aren’t sure precisely what that entailed … Then a dip into Michael Palin’s Sackful of Limericks will provide all the answers – and a lot of fun besides.” (Syndetics summary)

Words are my matter : writings about life and books, 2000-2016 with a journal of a writer’s week / Ursula K. Le Guin.
“Words Are My Matter collects talks, essays, introductions to beloved books, and book reviews by Ursula K. Le Guin, one of our foremost public literary intellectuals. Words Are My Matter is essential reading. It is a manual for investigating the depth and breadth of contemporary fiction — and, through the lens of deep considerations of contemporary writing, a way of exploring the world we are all living in.” (Syndetics summary)

One thousand things worth knowing / Paul Muldoon.
“Paul Muldoon’s new book, his twelfth collection of poems, is wide-ranging in its subject matter yet is everywhere concerned with watchfulness. Heedful, hard won, head-turning, heartfelt, these poems attempt to bring scrutiny to bear on everything, including scrutiny itself. One Thousand Things Worth Knowing confirms Nick Laird’s assessment, in the New York Review of Books, that Paul Muldoon is ‘the most formally ambitious and technically innovative of modern poets, [who] writes poems like no one else.'” (Syndetics summary)

The man who invented fiction : how Cervantes ushered in the modern world / William Egginton.
“In the early seventeenth century, a crippled, graying, almost toothless veteran of Spain’s wars against the Ottoman Empire published a book. It was the story of a poor nobleman, his brain addled from reading too many books of chivalry, who deludes himself that he is a knight errant and sets off on hilarious adventures. That book, Don Quixote , went on to sell more copies than any other book beside the Bible, making its author, Miguel de Cervantes, the single most-read author in human history.” (Syndetics summary) 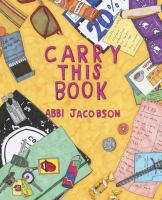 Carry this book / Abbi Jacobson.
“With bright, quirky, and colourful line drawings, Jacobson brings to life actual and imagined items found in the pockets and purses, bags and glove compartments of real and fantastical people-whether it’s the contents of Oprah’s favorite purse, Amelia Earhart’s pencil case, or Bernie Madoff’s suitcase. Carry This Book provides a humorous and insightful look into how the things we carry around every day can make up who we are.” (Syndetics summary)

How to be idle : a loafer’s manifesto / Tom Hodgkinson.
“From the founding editor of The Idler, the celebrated magazine about the freedom and fine art of doing nothing, comes not simply a book, but an antidote to our work-obsessed culture. In How to Be Idle, Tom Hodgkinson presents his learned yet whimsical argument for a new universal standard of living: being happy doing nothing. He covers a whole spectrum of issues affecting the modern idler–sleep, work, pleasure, relationships–while reflecting on the writing of such famous apologists for it.” (Syndetics summary)

A woman looking at men looking at women : essays on art, sex, and the mind / Siri Hustvedt.
“As well as being a prize-winning, bestselling novelist, Siri Hustvedt is widely regarded as a leading thinker in the fields of neurology, feminism, art criticism and philosophy. She believes passionately that art and science are too often kept separate and that conversations across disciplines are vital to increasing our knowledge of the human mind and body, how they connect and how we think, feel and see.” (Syndetics summary)

A poet’s Dublin / Eavan Boland ; edited by Paula Meehan and Jody Allen Randolph ; with photographs by Eavan Boland.
“Written over years, the transcendent and moving poems in A Poet’s Dublin seek out shadows and impressions of a powerful, historic city, studying how it forms and alters language, memory, and selfhood.” (Syndetics summary)