A strong biblical theme runs through this latest bookshelf, from popular author Bishop Spong’s latest reflections to stories from the Bible for minecrafters, or missionary journeys to North Korea.

The tweetable pope : a spiritual revolution in 140 characters, by Michael J. O’Loughlin.
How do you transform a church that treasures two thousand years of tradition? Jorge Mario Bergoglio made it his mission to “rebrand” the Catholic Church when he was elected pope to better reflect Jesus Christ. With more than 21 million followers reading Tweets in 9 languages, Francis regularly posts his 140-character (or less) sermons a few times each week – communicating directly with his flock. Common themes include the poor, forgiveness, mercy, joy. These little sermons help us understand his vision for the church to be inspired to be better Christians. Also received is The name of God is mercy : a conversation with Andrea Tornielli.

Biblical literalism : a gentile heresy : a journey into a new Christianity through the doorway of Matthew’s gospel, by John Shelby Spong.
“Using the Gospel of Matthew as a guide, Spong explores the Bible’s literary and liturgical roots – its grounding in Jewish culture, symbols, icons, and storytelling tradition – to explain how the events of Jesus’ life, including the virgin birth, the miracles, the details of the passion story, and the resurrection and ascension, would have been understood by both the Jewish authors of the various gospels and by the Jewish audiences for which they were originally written. Bishop Spong makes clear that it was only after the church became fully Gentile that readers of the Gospels took these stories to be factual, distorting their original meaning….” (drawn from Syndetics summary)

The grammar of God : a journey into the words and worlds of the Bible, by Aviya Kushner.
Aviya Kushner grew up in a Hebrew-speaking family, reading the Bible in the original Hebrew and debating its meaning over the dinner table. She knew much of it by heart – and was therefore surprised when, while getting her MFA at the University of Iowa, she took the novelist Marilynne Robinson’s class on the Old Testament and discovered she barely recognized the text she thought she knew so well. … the English translation often felt like another book entirely from the one she had grown up with. … In this eye-opening chronicle, Kushner tells the story of her vibrant relationship to the Bible, and along the way illustrates how the differences in translation affect our understanding of our culture’s most important written work. A fascinating look at language and the beliefs…”(Syndetics summary).

The cities that built the Bible, by Robert R. Cargill.
“For many, the names Bethlehem, Babylon, and Jerusalem evoke epic stories from the Bible – fortresses, moonlit mangers or magnificent temples. This is a magnificent tour through fourteen cities: the Phoenicia cities of Tyre, Sidon, Ugarit, Nineveh, Babylon, Megiddo, Athens, Alexandria, Jerusalem, Qumran, Bethlehem, Nazareth, and Rome, with dig sites, ruins, and relics. An interesting and informative adventure through time. 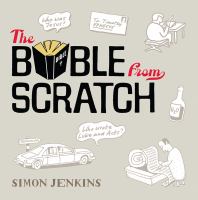 The Bible from scratch, written & illustrated by Simon Jenkins.
“For first-time readers, the Bible can be an intimidating and hefty read. This lively and witty resource offers a lightning sketch of the Bible that clearly explains the essential meaning of every book from both the Old and New Testaments. It provides helpful hints for understanding the motives and messages behind each of the Biblical writers and introduces all the famous people and events from key stories. Filled with humorous illustrations and plenty of wit, this is an ideal guide for getting to know the Bible.” (Syndetics summary) We’ve also received The unofficial Bible for Minecrafters : stories from the Bible told block by block.

Apostle : or bones that shine like fire : travels among the tombs of the twelve, by Tom Bissell.
Combining travel writing, and biblical history, and a deep lifelong relationship with Christianity, Bissell explores who the apostles were as men but also how their identities have been shaped ever since. This takes him around the world, from Rome to India and Kyrgyzstan, as the apostles travelled from ‘Jerusalem to Samaria and the ends of the earth’.

The last supper : the plight of Christians in Arab lands, by Klaus Wivel ; translated by Mark Kline.
“In 2013, alarmed by scant attention paid to the hardships endured by the 7.5 million Christians in the Middle East, journalist Klaus Wivel traveled to Iraq, Lebanon, Egypt, and the Palestinian territories on a quest to learn more about their fate. [He] spoke with priests whose churches have been burned, citizens who feel like strangers in their own countries, and entire communities whose only hope for survival may be fleeing into exile. Wivel asks, why have we not done more to protect these people?” (drawn from Syndetics summary)

Not forgotten : the true story of my imprisonment in North Korea, by Kenneth Bae ; with Mark Tabb.
“Bae moves to China and leads guided tours into North Korea. Six years later, after eighteen successful excursions in and out of the country, Ken is suddenly stopped at the border, arrested, brought to Pyongyang for further questioning, and sentenced to fifteen years of hard labour. His crime? Attempting to overthrow the North Korean government. Media attention culminates in President Obama’s call for prayer on behalf of Ken at the 2014 National Prayer Breakfast. Meanwhile, Ken grapples with his new, solitary reality as a captive of one of the world’s most brutal governments….” (drawn from Syndetics summary)

Good faith : being a Christian when society thinks you’re irrelevant and extreme, by David Kinnaman and Gabe Lyons.
“Many Christians today feel overwhelmed as they try to live faithfully in a culture that seems increasingly hostile to their beliefs. … This isn’t just a problem that affects individual Christians; if left unaddressed, the growing gap between the faithful and society’s tolerance for public faith will have lasting consequences for the church in America. … Readers will discover the most significant trends that offer both obstacles and opportunities to God’s people, and how not only to challenge culture but to create and renew it for the common good. David Kinnaman and Gabe Lyons invite fellow Christians to understand the heart behind opposing views and show them how to be loving, life-giving friends despite profound differences.” (Syndetics summary)