New Zealand’s first parliamentary elections were held in 1853, although at that time not everyone had the right to vote. This week’s selected topic comes from the Today in History page at nzhistory.net.nz. The New Zealand Collection is located on the second floor of The Central Library. Each week we feature topics in the This Week in History display in the NZ Collection and using available databases and the library collections to illustrate and provide additional information. This week the first of a two part blog as we remember the first Māori MPs elected to Parliament. Next week will highlight the historic alliance made in 1936 between Rātana and the Labour Party that was to greatly influence the Māori seats, but first 1868, and the establishment of the first four Māori seats.

Four Māori seats in the House of Representatives were established in 1867, initially for a period of five years. The innovation was in some part a recognition of Māori support for the Crown during the New Zealand Wars but also politically motivated as the Māori seats also served as a counterweight to new seats that had been created on the South Island goldfields. You can read the Māori Representation Act here at the Early New Zealand Statutes site by The University of Auckland Library.

Nomination day in all four Māori seats was on the 15 April. Frederick Nene Russell (Northern Maori) and Mete Kīngi Paetahi (Western Maori) were elected unopposed. In Eastern Maori there were two candidates and Tareha Te Moananui was elected after a show of hands. In Southern Maori there were three candidates and a poll was demanded. Held in June, this resulted in the election of John Patterson. From the Electoral Commission New Zealand website you can read more of the history of the Māori Seats and MPs here.

Mundy, Daniel Louis, 1826?-1881. Mundy, Daniel Louis (Christchurch) fl 1858-1875 :Portrait of Metekingi Paetahi. Ref: PA2-1176. Alexander Turnbull Library, Wellington, New Zealand. http://natlib.govt.nz/records/22876136
In the 1870s Hōri Kerei Taiaroa, the member for Southern Maori, argued unsuccessfully for an increase in the number of Maori electoral districts to five or even seven. He did succeed in getting legislation passed in 1876 that made the seats permanent unless they were abolished by legislation.

Hori Kerei Taiaroa. General Assembly Library :Parliamentary portraits. Ref: 35mm-00131-e-F. Alexander Turnbull Library, Wellington, New Zealand. http://natlib.govt.nz/records/22864517
In 1986, the Royal Commission suggested that under MMP Māori would no longer need the Māori seats but it was argued against and as a result of the reforms that were introduced following the commission, the Māori seats survived. The number of seats would now increase or decrease according to the results (population numbers) of the regular Māori electoral option”. As a result in 1996 before the first MMP election, the number of Māori seats increased to five, the first increase in 129 years. In 2002, it went up to seven. There is a map on the Te Ara website that shows the boundaries of the Māori seats over the years here. To read a variety of opinions about Māori parliamentary seats I conducted a search using an index found on the library Gateway page here. You can find Index New Zealand in the drop-down menu and once you log on using your library card a search for ‘Māori Seats’ will give you a list of articles from Newspapers and magazines. You can filter the search if you just want journal articles and with this I found some interesting articles from Mana Magazine, New Zealand Geographic, The Listener, The Journal of New Zealand Studies and others. You can search for the journals held by the library on our catalogue and what years we hold. If you are looking for older copies that are no longer on the open shelves they can be retrieved for you from the magazine stack accessed from the 2nd floor. For example we have copies of Mana Magazine dating back to the first issue in 1993.

You can also research many of these early Māori politicians on the libraries Tāngata Māori Database. This comprises a collection of articles on Māori people covering the years 1930 to the present day, many of them taken from the Dominion and Evening Post newspapers. The core of the material once formed the biographies file of the New Zealand vertical file collection. Ask at the second floor enquiry desk for help with this database or to locate the articles you find.

The New Zealand Collection holds a number of biographies of some of the early Māori MPs such as;

Wiremu Pere : the life and times of a Maori leader, 1873-1915 / Joseph Anaru Te Kani Pere and others.
“Wiremu Pere (Wi Pere) lived from 1837 to 1915, leading his tribes of Rongowhakaata and Te Aitanga a Mahaki through some of the most turbulent chapters of New Zealand history. He stood resolute against colonialism and entered parliament to stand up for his East Coast people, yet was astute in his business dealings and was compromised in the views of many Pakeha and Maori. This handsome book, illustrated with numerous photographs, whakapapa and maps, sets out the many sides Wi Pere’s life and times with a particular focus on his family life, parliamentary career and contributions to the East Coast.” (Syndetics summary)

Ngapua : the political life of Hone Heke Ngapua, MHR / Paul Moon. “Hone Heke Ngapua (1869-1909) was one of the foremost Maori leaders of the past two centuries. He received enormous recognition as an MP, working alongside Carroll, Ngata, and Seddon, and emerged as the country’s first pan-tribal Maori leader. Paul Moon’s long-awaited first biography of Ngapua is as absorbing as the man himself, and fills a vital gap in the country’s history – especially its Maori history – in the late nineteenth and early twentieth centuries.” (Adapted from Syndetics summary)

You will also find useful material about Māori in relation to government, treaty and leadership.

To honour the treaty : the argument for equal seats/ by Simon Reeves. 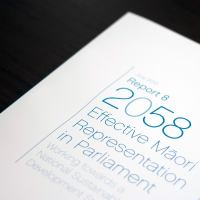 The Treaty of Waitangi companion : Māori and Pākehā̄̄ from Tasman to today / edited by Vincent O’Malley, Bruce Stirling and Wally Penetito.
“Since the Treaty of Waitangi was signed by Maori chiefs and Governor Hobson in 1840 it has become the defining document in New Zealand history. From the New Zealand Wars to the 1975 Land March, from the Kingitanga to the Waitangi Tribunal, from Captain Cook to Hone Harawira, The Treaty of Waitangi Companion tells the story of the Treaty and Maori and Pakeha relations through the many voices of those who made this country’s history.Sourced from government publications and newspapers, letters and diaries, poems, paintings and cartoons, the Companion brings to life the long history of debates about the Treaty and life in Aotearoa.” (Adapted from Syndetics summary)

Speeches that shaped New Zealand : 1814-1956 / Hugh Templeton, Ian Templeton & Josh Easby.
“A collection of historically significant speeches by those who helped lead the development of New Zealand as a nation between 1814 and 1956.” (Publisherinformation)