This week in history takes us to Opotiki in 1865 where Rev Carl Völkner was hanged. We also find out that in 1947 The New Zealand Symphony Orchestra held their debut concert in Wellington and in 1960 Barry Crump’s A Good Keen Man was published. The New Zealand Collection is located on the second floor of The Central Library. Each week we feature a number of topics that make up the This Week in History display in the NZ Collection. In this blog we also suggest other collections and resources that can be accessed via the internet or at the Central Library to find out more about each topic. As usual this week’s selected topics come from the Today in History page at nzhistory.net.nz.

On the 2nd March 1865 Carl Sylvius Völkner, was hung at Ōpōtiki.
Followers of the Pai Marire religion were blamed for his death. Völkner was suspected of spying for the Government. Following his death the government responded with military reprisals and his killers were hunted down. Local people from Eastern Bay of Plenty tribes were arrested and some executed and large areas of land were confiscated from the tribes. The New Zealand Collection has recently added a new book about Volkner ‘Journey to a hanging’ by Peter Wells.

Journey to a hanging / Peter Wells.
“In 1865, Rev Carl Sylvius Völkner was hanged, his head cut off, his eyes eaten and his blood drunk from his church chalice. One name – Kereopa Te Rau (Kaiwhatu: The Eye-eater) – became synonymous with the murder. In 1871 he was captured, tried and sentenced to death. But then something remarkable happened. Sister Aubert and William Colenso – two of the greatest minds in colonial New Zealand – came to his defence. Regardless, Kereopa Te Rau was hanged in Napier Prison. But even a century and a half later, the events have not been laid to rest. Questions continue to emerge: Was it just? Was it right? Was Kereopa Te Rau even behind the murder? And who was Völkner – was he a spy or an innocent?” (Back cover)

Beyond the imperial frontier : the contest for colonial New Zealand / Vincent O’Malley.
“An exploration of the different ways Māori and Pākehā ‘fronted’ one another – the zones of contact and encounter – across the nineteenth century. Beginning with a pre-1840 era marked by significant cooperation, Vincent O’Malley details the emergence of a more competitive and conflicted post-Treaty world.” (Publisher information)

Online databases available on the library website can also be used to access information on this topic such as the National Library site where you can view pictures, documents and maps relevant to this subject. Kereopa Te Rau was captured in the Urewera in November 1871. He had been wanted by by the colonial authorities for his part in the killing of the Reverend Carl Völkner. He was brought to Napier by steamer and handed over to the police on November 28. From the Papers Past database you can read his defense as reported in the Colonist in 1872. The 6th March saw the 1947 debut performance of the NZ Symphony Orchestra.
Due to the success of the 1940 Centennial Celebrations with the performances of the Centennial Festival Orchestra the government was encouraged to form a National Orchestra. Delayed by the Second World War it wasn’t until 1947 that the idea of having a permanent National Orchestra came to fruition. In 1946 first rehearsals were held and and Andersen Tyrer was appointed conductor and Vincent Aspey orchestra leader. The debut concert was held in Wellington’s Town Hall. Wellington Libraries hold over 100 titles in a large collection of the orchestra’s music and there are a number of books that celebrate the orchestra’s anniversaries. 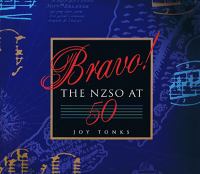 Bravo! : the NZSO at 50 / Joy Tonks.
Joy Tonks, the NZSO’s historian, archivist and former personnel manager, has written a lively account of the human side of the orchestra’s life on and off stage. Chapters cover the players, the maestros, the concertmasters, the guest artists and overseas tours.(adapted from front cover)

On the 3rd March in 1960 Barry Crump’s novel A Good Keen Man was published.
Barry Crump had a reputation as the iconic ‘Kiwi bloke’. He had survived a violent childhood and was criticised for how he treated his wives and his children. He told his stories with humour and highlighted rural New Zealand in more than 20 books. Crump was often referred to as a ‘man’s man’ who could tell a great yarn. We hold a number of biographies and a large collection of his fiction writing In endless fear : a true story / Colin Crump.
“Autobiography by Colin Crump, brother of well-known novelist, Barry Crump, in which he writes about the abusive childhood he shared with Barry and their other siblings. Text is supplemented with family photographs.” (Syndetics summary)

A life in loose strides : the story of Barry Crump / Colin Hogg.
“Barry Crump’s life was the best story he ever wrote. This iconic, hardcase Kiwi impressed a whole nation with his oversized personality. ‘A Life in Loose Strides’ throw’s Crump’s wild, wayward and extraordinary life and works back onto the page, getting inside a man who learned to hide behind his own myth.” (adapted from back cover)