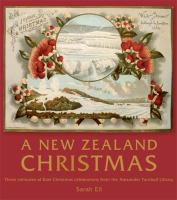 In 2008, Sarah Ell collated a selection of New Zealand Christmas images, including Christmas cards, Christmas day dinner menus, photographs, advertisements and poster art, from the Alexander Turnbull Library. The result of this collection is the beautiful book A New Zealand Christmas : three centuries of Kiwi Christmas celebrations from the Alexander Turnbull Library. Featuring beautiful images and informative captions about Christmas in New Zealand throughout the years, it also features photographs, Christmas cards and other printed images from World War One at Christmas time. This beautiful edition is an interesting and indulgent read any time, but particularly at this time of the year! Place your reserve here.

When Great Britain first declared war against Germany in 1914, New Zealand did not have its own army. Training camps were urgently set up in Featherston in Wairarapa, at Narrow Neck in Auckland and Awapuni near Palmerston North. The main camp was established at Trentham in Upper Hutt.

The Maymorn camp was built as an overflow camp 7km away from Trentham. It was the home of the 3rd and 4th Battalions of the New Zealand rifle brigade, then the 11th Infantry Reinforcements, until the camp was closed in 1916.

This image shows the tables set up for Christmas dinner at Maymorn camp on 25 December 1915.

After arriving at Anzac Cove to find scores of Australian dead and wounded scattering the beach, the Anzac soldiers were instructed to create a network of dug-outs to provide some shelter from the Turkish barrage. The men lived in these dug-outs in filthy conditions with inadequate food and water, as well as frequent outbreaks of dysentery and other diseases.

This photo, showing two soldiers in a dug-out in Gallipolli, was taken not long before the Allied withdrawal from the ill-fated peninsula on December 20. This brought an end to the horrific eight months suffered by the New Zealand, Australian and other Allied troops who landed at what later became known as Anzac cove on April 25, 1915. After withdrawing from Turkey, New Zealand troops were redeployed to France. Germany had invaded France and Belgium, and the British planned to attack the Germans in the Somme region, to relieve pressure on the French. The Battle of the Somme began in June 1916, followed by a second push in mid-September, which involved New Zealand troops. By Christmas 1916, around 1.2 million men on both sides had been killed or wounded.

This Christmas card was sent home to New Zealand from war-torn France. This Christmas menu is from the Sergeants’ Mess at the New Zealand Army Service Corps number 6 camp at Sling, near Bulford on the Salisbury Plain in England. It was dedicated to the memory of Gallipolli and the newly minted ‘Anzac Day’. The menu shows the men ate well through the day, from bacon, liver and chips for breakfast through a full roast dinner of turkey, beef and chicken to leftover roast, mince pies, jam tarts and beer for supper. This Christmas card from 1916 reflects a sense of imperial and national pride, following New Zealand’s rush to support Mother England against the German aggressors. It was printed for Mr and Mrs Hardie of Wanganui and bears a poem on the cover. By Christmas 1917, New Zealand troops were still at war in Europe and New Zealand headquarters was at Chateau Segard in Belgium. This photo shows the New Zealand divisional commander, Major-General Andrew Hamilton Russell, carving a turkey for officers. At the time of this Christmas card’s release in 1917, New Zealand had been at war for three years. This card clearly depicts the sense of distance felt by those in New Zealand that had loved ones fighting overseas, with the imagery of hands clasped across the distance between New Zealand and “somewhere in France”. This card was posted to New Zealand from France in 1918, clearly expressing the sender’s desire to return home with the poem on the front: “God gave all men all earth to love / But since our hearts are small / Ordained for each one spot should be / Beloved over all. / Gorse behind the windy town, pollen o’ the pine / Bell-bird in the leafy deep where the Ratas twine / Ferns above the saddle-bow, flax upon the plain / ‘Tis where Pohutukawas bloom we long to be again”.

The drawing of the damaged windmill on the front of the card is thought to depict a windmill at Courcelles in northern France, which withstood repeated shelling and became a landmark for New Zealand troops fighting in the area. New Zealand troops were easily identified from other colonial troops by their hat – their distinctive headwear, which became known as a lemon-squeezer, is said to have been developed in 1911 by Lieutenant Colonel William Malone, who felt that the fore-and-aft dented hats worn by his troop collected water too readily. He redesigned the hat so that water ran off more easily. Malone’s Wellington regiment adopted this style of hat and was more widely distributed from mid 1916 to other troops. They became a highly visible way to distinguish New Zealand soldiers from other colonial troops.

These cards both show New Zealand soldiers in lemon-squeezers – the first dates from 1917 shows a Kiwi soldier resting on a milestone which is engraved with ‘France to New Zealand, 13,000 miles’ The second is from 1918 and was designed by solider and artist Lieutenant George Patrick Hanna. If you’d like to find out more about cards and postcards sent home to New Zealand during World War One, we also recommend this book: 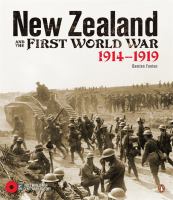