Shiver me timbers! Ye lily-livered landlubbers best be making the most of Talk Like a Pirate Day! Don’t be a scurvydog, cast yer eyes on some of the pirate books below. If yer pirate is a bit rusty, get yerself shipshape with Pirate on Mango Languages!

Bloody Jack / L.A. Meyer.Bloody Jack: Being an Account of the Curious Adventures of Mary “Jacky” Faber, Ship’s Boy
“Desperate to escape a life of poverty in London in 1797, twelve year old Jacky joins HMS Dolphin as a ship’s boy. Jacky loves the dangers and hard work but has difficulty in concealing one fact – Jacky is a girl!” (Library catalogue) 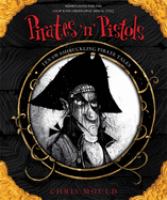 Pirates ‘n’ pistols : ten swashbuckling pirate tales / Chris Mould.
“Light a fire, gather your mates, and share tales that will shiver their timbers and send ice through their bones. This compilation includes familiar tales of “Davy Jones’ Locker” and excerpts from Robert Louis Stevenson’s Treasure Island and Edgar Allan Poe’s “The Gold Bug.” Mould also pens five of the selections himself, with wicked and malevolent mastery. Illustrated throughout with stunning ink drawings, this book will keep readers enthralled for hours as they enjoy accounts of rogue pirates, fearless captains, storming seas, and lost treasure. ” (Syndetics summary) 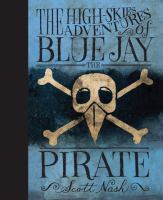 The high skies adventures of Blue Jay the pirate / Scott Nash.
” Blue Jay, the notorious captain of the airship Grosbeak, has been collecting eggs for years as he robs from the evil oligarchs in Thrushia. He rarely lets them hatch (and is happy to perpetuate the myth that he cannibalistically consumes them), but when his navigator, Junco, is compelled to nurse one particular egg, the entire crew has to care for Gabriel, a rare gosling. Their adventures take them into contact with everything from dangerous fisher cats and a dirt-loving mole on the ground to bats and crows in the air.” (Publisher Weekly) 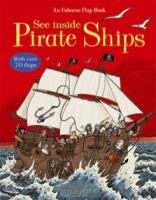 Ship of magic / Robin Hobb
“Living ships, menacing pirates, kidnapping into virtual slavery, the heroine disguising herself as a boy in order to accomplish her purpose–all these figure in a saga-inaugurating yarn that suggests what naval romancer Patrick O’Brian might do were he to write high fantasy.” (Booklist)

Pirates : a history / Tim Travers.
“The popular conception of piracy revolves around the swashbuckling adventures that took place in the Caribbean in the 1500s, as well as the so-called Golden Age of piracy that occurred from the 1660s to the 1720s. In fact, piracy has a much longer and broader history to its name. This comprehensive history covers piracy from its origins in the ancient and classical periods and follows its evolution through the Middle Ages before treating in fine detail the era of the Caribbean and the Golden Age. With sections also addressing the infamous Barbary corsairs, Chinese and Pacific Ocean pirates, and modern piracy, this is the most comprehensive history of high-seas banditry to date.” (Syndetics summary) 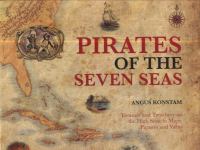 Pirates of the seven seas : treasure and treachery on the high seas : in maps, pictures and yarns / Angus Konstam.
“The pirate perhaps epitomises the loveable rogue of popular legend, and our interest in pirates, both real and fictional, is enormous. This beautifully illustrated book presents the story of piracy in a completely new way.” (Syndetics summary)

Isaac the Pirate : 1, To exotic lands / Christophe Blain.
“Isaac is a talented artist with no money but with a wonderful lover back in the 18th century. He runs into a rich Captain who is taken by his abilities and hires him with a handsome stipend to come along in his voyages. It turns out he’s a pirate. Isaac went to make some quick money and come back and marry the love of his life but has embarked upon a series of at turns hilarious and dark adventures on the high seas from the Caribbean to the icy North, with apparently no end in sight. Meanwhile, his girlfriend is getting attention from another.” (Syndetics summary)