Bird By Bird is is a lovely little book which offers coping mechanisms for those overwhelmed by either life or literary endeavours. The advice for both situations is ” just take it one step at a time” and “never give up.”A landmark event this month is another book by beloved author Frances Mayes of Under The Tuscan Sun fame. In Under Magnolia she tells of her rather rollicking upbringing in the American South. Happy reading!

Bird by bird : some instructions on writing and life / Anne Lamott.
“Thirty years ago my older brother, who was ten years old at the time, was trying to get a report on birds written that he’d had three months to write. It was due the next day. We were out at our family cabin in Bolinas, and he was at the kitchen table close to tears, surrounded by binder paper and pencils and unopened books on birds, immobilized by the hugeness of the task ahead. Then my father sat down beside him, put his arm around my brother’s shoulder, and said, ‘Bird by bird, buddy. Just take it bird by bird.’” (Syndetics summary)

Under magnolia : a southern memoir / Frances Mayes.
“Mayes, adored for her famed Tuscany books (Under the Tuscan Sun, 1996; Every Day in Tuscany, 2010), mined the murky depths of her family’s history for her first novel, Swan (2002). She now returns to the scene of the crimes in both literal and figurative senses. Her southern memoir is a tale straight out of Faulkner, rife with episodes of dissipation and disillusion, parents who loved and fought with equally wild abandon, and ancestors with names like Big Mama and Daddy Jack.” (Abridged summary from Booklist).

What makes this book so great / Jo Walton.
“Offers a selection of the best of author’s musings about her prodigious reading habit. This title includes his many subjects that range from acknowledged classics, to guilty pleasures, to forgotten oddities and gems. It offers a collection of opinionated thoughts about past and present-day fantasy and science fiction, from one of our best writers.” (Wellington City Libraries catalogue note)

Lots of very serious issues this month, include history, economy, and how to become the best grandparent.

For the benefit of those who see : dispatches from the world of the blind / Rosemary Mahoney.
“Like many sighted people, Mahoney… dreaded the idea of going blind and felt uncomfortable around blind people. A magazine assignment sent her to visit Braille Without Borders, Tibet’s first educational institution for the blind, and its founder, blind German educator Sabriye Tenberken. Mahoney’s encounters with Tenberken and her resilient students inspired her to take a teaching position at Tenberken’s International Institute for Social Entrepreneurs (IISE) in Kerala, India, which trains and empowers visually impaired adults. Here she surveys the history of blind education and the surprising, upsetting results of vision restoration surgery but also focuses on the Tibetan children and the IISE students from lands as diverse as Liberia, Japan, and Norway.” (adapted from Syndetics summary)

Contest of the century : the new era of competition with China / Geoff Dyer.
“By sea and on the airwaves, by dollar and yuan, a contest has begun that will shape the next century. China’s rise has now entered a critical new phase, as it begins to translate its considerable economic heft into a bigger role on the world stage, challenging America’s recent supremacy. With its new navy, China is trying to ease the US out of Asia and re-assert its traditional leadership in the region. Beijing plans to turn the renminbi into the main international currency, toppling the dominance of the US dollar. And by investing billions to send its media companies overseas, it aims to contest Western values and shift the global debate about democracy and human rights. If globalisation has been the driving force of the past few decades, Geoff Dyer argues that a more traditional great power-style competition between the US and China will dominate this century. Yet he also shows why China may struggle to unseat the West – its ambitious designs are provoking intense anxiety, especially in Asia, while America’s global alliances have deep roots.” (adapted from Syndetics summary)

Nazis, Islamists, and the making of the modern Middle East / Barry Rubin and Wolfgang G. Schwanitz.
“During the 1930s and 1940s, a unique and lasting political alliance was forged among Third Reich leaders, Arab nationalists, and Muslim religious authorities. From this relationship sprang a series of dramatic events that, despite their profound impact on the course of World War II, remained secret until now. In this groundbreaking book, esteemed Middle East scholars Barry Rubin and Wolfgang G. Schwanitz uncover for the first time the complete story of this dangerous alliance and explore its continuing impact on Arab politics in the twenty-first century.” (adapted from Syndetics summary)

A welcome addition to the catalogue is the latest book by Vietnamese monk Thich Nhat Hanh on fear.

Fear : essential wisdom for getting through the storm, by Thich Nhat Hanh.
“Fear has countless faces: from the fear of failure to worries about everyday life, from financial or environmental uncertainties to the universal despair we all experience when faced by the loss of a friend or loved one. Even when surrounded by all the conditions for happiness, life can feel incomplete when fear keeps us focused on the past and worried about the future. While we all experience fear, it is possible to learn how to avoid having our lives shaped and driven by it. In these pages, Thich Nhat Hanh offers us a timeless path for living fearlessly.” (Back cover)

The age of atheists : how we have sought to live since the death of God, by Peter Watson.
“In his 14th book, British journalist and historian Watson (The Great Divide) turns his estimable intellectual skills on the history of non-belief – which he calls “a major plank of modernity” -beginning with Friedrich Nietzsche’s 1882 declaration that “God is dead.” While this ground is well-trodden, Watson takes an intriguing course: he charts it by genre. Particularly fascinating are passages about non-belief’s impact on the arts.” (Publisher Weekly)

Religion 101 : from Allah to Zen Buddhism : an exploration of the key people, practices, and beliefs that have shaped the religions of the world, by Peter Archer, MA, MLitt.
“Written in easy-to-understand language, Religion 101 offers a fascinating – and memorable – glimpse at the sacred stories, traditions, and doctrines that have influenced today’s most popular religions. From Jesus and the Four Noble Truths to the Buddhist Wheel of Existence, this book provides you with thought-provoking insight into the customs and beliefs of common faiths like Christianity, Judaism, Buddhism, and Islam. So whether you’re looking to unravel the mysteries of existence and meaning, or just want to find out what Kabbalah is all about, Religion 101 has all the answers – even the ones you didn’t know you were looking for.” (Page 4 of cover)

Here are some of the latest science goodies that have come across my desk in the last month or so.

The story of physics : from natural philosophy to the enigma of dark matter / Anne Rooney.
“The Story of Physics traces the development of physics from the natural philosophers of the ancient world to cutting-edge experiments in quantum mechanics Also features the giants of science history, from Archimedes through Newton and Galileo to Curie, Einstein and Hawking.” (Library Catalogue) 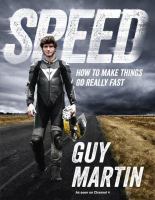 Speed : how to make things go really fast / Guy Martin.
“How far can Guy Martin travel on a bicycle, in a human powered aircraft, on a hydroplaning motorbike or in a supersled? How will Guy Martin complete these four dangerous, adrenaline-fuelled speed challenges in record time?” (Cover)

The monkey’s voyage : how improbable journeys shaped the history of life / Alan de Queiroz.
“Biogeography, the study of the geographical distribution of living things, has been of interest since at least the time of the Greeks. In his entertaining and enlightening book, evolutionary biologist de Queiroz demonstrates that despite this longstanding interest in the subject, the discipline has resisted an organizing paradigm. De Queiroz comprehensively describes the shift, beginning in the 1970s and 1980s, from Darwin’s belief that long-distance dispersal was the dominant explanation for biogeographic patterns to the rise of those promoting vicariance-the belief that environmental fragmentation is responsible for observed patterns-and back again to promoting long distance dispersal. He cogently describes the science underlying these ideas, the nature of continental drift, the complexity of molecular clocks, and the mathematics of cladistics, explaining why he believes the only reasonable interpretation for current data is an acceptance of rare, long-distance dispersal events that can only be called “mysterious” and “miraculous,” including the book’s eponymous monkeys accidentally crossing the Atlantic Ocean. Beyond the actual science, de Queiroz brings insight into the nature of scientific discourse itself.” (Publisher Weekly)

Volcanoes of the south wind : a volcanic guide to Tongariro National Park / Karen Williams.
“A comprehensive field guide to the remarkable landscape of this dual World Heritage site. With photographs and diagrams, it tells the turbulent story of a volcanic complex that continues to make headlines. It explains the incredible forces that shape and mould the landscape, and where on the park’s walks and tracks you can see them.” (Back cover)