A lot of books on ever popular Doctor Who, which celebrated its 50 years on TV, are featured in this month’s new books on TV and movies. Also, intriguing Streampunk and Cult Movie Art 2 should not be missed.

Who’s 50 : the 50 Doctor Who stories to watch before you die : an unofficial companion / Graeme Burk & Robert Smith?
Identifies the fifty must-watch episodes from the history of Doctor Who’s television run, and features trivia, references, and behind-the-scenes details for each storyline. (Syndetics summary) 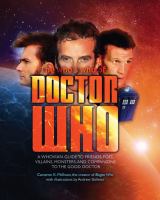 The who’s who of Doctor Who : a Whovian’s guide to friends, foes, villains, monsters, and companions to the good doctor / Cameron K. McEwan ; with illustrations by Andrew Skilleter.
“The Who’s Who of Doctor Who is the must-have handbook exploring the dynamic cast of characters in Doctor Who over the past half century. Discover details about the intimate relationships between characters, their loyalties, their betrayals, and of course how they collide with the good Doctor through time. With over 300 entries from companions and friends to aliens and villains, and loaded with photos from fifty years of Doctor Who, readers can learn about the Weeping Angels, River Song, the Master, and of course the dreaded Daleks. With text from Cameron K. McEwan, the creator of Blogtor Who and featuring artwork from the popular Doctor Who illustrator, Andrew Skilleter, this is essential reading for all Whovians.”(adapted from amazon.co.uk)

Doctor Who : the eleventh hour : a critical celebration of the Matt Smith and Steven Moffat era / edited by Andrew O’Day.
“During 2013, Doctor Who, the world’s longest running science fiction show, celebrates its 50th birthday. Published to celebrate the Doctor’s anniversary, this book provides a valuable record of the current Matt Smith Doctor, who arrived in 2010 and is still travelling in time and space. This first book devoted solely to the Steven Moffat/Matt Smith era is written by experts on the Doctor. It is wide-ranging and varied in viewpoint and explores such issues as the performance of the Doctor, the gothic and fairy tale genres, the portrayal of history on screen, gender and sexuality, the phenomenon of Christmas television, the transatlantic dimensions of the programme, its look and sound, promotional culture and audience response. Also discussed are Doctor Who interactive games and the spin-off The Sarah Jane Adventures. Written in accessible style, the book will be a valuable contribution to the expanding literature on Doctor Who, for fans, watchers of sci fi TV and students alike.”(adapted from amazon.co.uk)

Who is Who? : the philosophy of Doctor Who / Kevin S. Decker.
“When you have been wandering the cosmos from one end of eternity to another for nearly a thousand years, what’s your philosophy of life, the universe, and everything? Doctor Who is 50 years old in 2013. Through its long life on television and beyond it has inspired much debate due to the richness and complexity of the metaphysical and moral issues that it poses. This is the first in-depth philosophical investigation of Doctor Who in popular culture. From 1963’s An Unearthly Child through the latest series, it considers continuity and change in the pictures that the programme paints of the nature of truth and knowledge, science and religion, space and time, good and evil, including the uncanny, the problem of evil, the Doctor’s complex ethical motivations, questions of persisting personal identity in the Time Lord processes of regeneration, the nature of time travel through ‘wibbley-wobbley, timey-wimey stuff, how quantum theory affects our understanding of time; and the nature of the mysterious and irrational in the Doctor’s universe.”(adapted from amazon.co.uk) 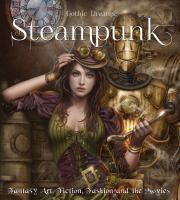 Steampunk : fantasy art, fiction, fashion and the movies / Henry Winchester ; foreword by G.D. Falksen.
“Imagine a world where steam is the main source of power, but the attitudes are distinctly futuristic – the romance of the past meets the technology of the future. Steampunk is a subculture on the rise, an exciting mix of adventure and sci fi in a world full of cogs and rivets, goggles and corsets. Influenced by the worlds created by H.G. Wells and Jules Verne, Steampunk has grown into a movement encompassing fashion, art, movies, literature and even music. Films such as The League of Extraordinary Gentlemen catapulted steampunk to the big screen, whilst events have sprung up all over the world in which fans create magnificent costumes and put steampunk twists on modern devices. As you read this exciting new book, enjoy a stunning selection of artworks portraying the ecstatic fantasy of steam-powered worlds.”(adapted from amazon.co.uk) 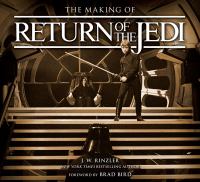 The making of Star wars Return of the Jedi : the definitive story / J. W. Rinzler.
“Just as Star Wars: Episode VI Return of the Jedi completed the most successful cinematic trilogy of its generation, perhaps of all time, this splendid thirtieth-anniversary tribute concludes New York Times bestselling author J. W. Rinzler’s trio of breathtaking books celebrating George Lucas’s classic saga. Once again, the author’s unprecedented access to the Lucasfilm Archives has yielded a mother lode of fascinating and often unexpected revelations from behind the scenes of a blockbuster in the making. Brimming with previously unpublished photos, concept artwork, script excerpts, storyboards, on-set interviews and present-day commentary, The Making of Return of the Jedi chronicles how George Lucas and his crew of extroverted artists, misfits and expert craftspeople roused themselves to great heights for a third time to create the next unforgettable chapter in one of the most beloved stories in movie history.”(adapted from amazon.co.uk)

The disaster artist : my life inside The room, the greatest bad movie ever made / Greg Sestero & Tom Bissell.
“Reading this downright thrilling book is a lot like watching Tim Burton’s Ed Wood: it’s sometimes infuriating, often excruciating, usually very funny, and occasionally horribly uncomfortable, but it’s also impossible to look away from. The Room, a 2003 film written, directed, and starring the inscrutable Tommy Wiseau, was massively and enthusiastically lambasted by critics, proclaimed by some as the worst movie ever made (an insult, some movie fans might say, to Ed Wood’s Plan 9 from Outer Space). Sestero, who starred in The Room, teams up with magazine journalist Bissell to walk us through the unpredictable, confusing, and it must be admitted wildly incompetent production of Wiseau’s vanity project. This is a making-of book like no other, the day-to-day story about the filming of a movie that everyone involved with it, except its creator, knew was awful. But it’s also the story of a very interesting friendship between Sestero and Wiseau, and the story of an enigmatic and incredibly self-absorbed man who, in making his film, seemed to be trying to exorcise a troubled past and build an entirely new version of himself.” (adapted from Booklist) 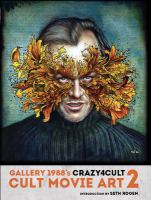 Gallery 1988’s crazy4cult : cult movie art. 2 / introduction by Seth Rogen ; [edited by Gallery 1988].
“There’s probably a more dignified way to enjoy the pop culture group Gallery 1988’s second collection of its Crazy 4 Cult art show than by stopping on every page to show your friends the brilliant takes on –Donnie Darko, The Breakfast Club, Suspiria, or A Clockwork Orange. However, breathless excitement is the honest response to this collection of cult classic-inspired artwork featuring mixed-media takes on beloved films. As actor Seth Rogen says in the book’s introduction, this is an accessible art collection for fans of offbeat interpretations of the movies they grew up watching. Highlights include Andrew DeGraff’s map of Indiana Jones and the Temple of Doom, Jude Buffum’s video game approach to The Princess Bride, and Michelle Coffee’s plushie figure depicting The Dude from The Big Lebowski.”(adapted from Library Journal)