On 25 April 1915, New Zealanders along with other Allied troops landed on the Gallipoli Peninsula in Turkey, with the aim of taking the Dardanelles, and threatening the Ottoman capital, Constantinople (now Istanbul). At the end of the nine month campaign, about a third of the New Zealand soldiers taking part had been killed. Anzac Day commemorates all New Zealand soldiers killed in war, and also honours returned servicemen and women.  Here is some further reading:

Shattered glory : the New Zealand experience at Gallipoli and the Western Front / Matthew Wright.
“The Gallipoli campaign of 1915 destroyed New Zealand’s fantasies of war as a glorious schoolboy adventure on behalf of a beloved Empire. The Western Front campaign that followed in 1916-18 gave shape to the emotional impact. it was a horror world of death and mud that destroyed the souls of the young men who fought in it. Together, these two campaigns shaped the lives of a generation of New Zealanders and have given a particular meaning to modern memory of war. In Shattered Glory, highly regarded historian Matthew Wright illuminates New Zealand’s human experience during these two First World War campaigns, exploring the darker side of New Zealand’s iconic symbols of national identity and explaining some of the realities behind the twenty-first century mythology.” (Back cover) 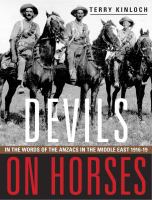 Devils on horses : in the words of the Anzacs in the Middle East 1916-19 / Terry Kinloch ; foreword by Dr Christopher Pugsley.
“Reunited with their horses in Egypt after the shattering experience of Gallipoli, the Anzac mounted riflemen and light horsemen were initially charged with the defence of the Suez Canal, then with the clearance of the Sinai peninsula, and finally with the destruction of the Turkish armies in Palestine and Syria.
At last they could pursue the style of warfare for which they had been trained: on horseback.
The First World War battlefields in the Middle East have long been overshadowed by those of Gallipoli and the Western Front. Yet the story of the mounted riflemen in Sinai and Palestine is a truly fascinating one. Using the soldiers’ original letters and diaries wherever possible, Kinloch vividly describes every battle and skirmish in the long campaign against the Turks: the crucial Battle of Romani, the defeats at Bir el Abd, Gaza and Amman, and the successes at Beersheba, Ayun Kara and elsewhere.” (Abridged from publisher’s description) 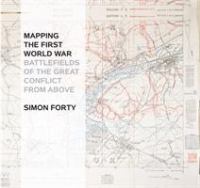 Mapping the first world war : battlefields of the great conflict from above.
“Some one hundred years on from the Great War, Mapping The First World War provides a unique perspective on the ‘war to end all wars’. Over a hundred maps and charts show the broad sweep of events, from Germany’s 1914 war goals to the final positions of the troops. There are maps depicting movements and battles as well as related documents, such as those on levels of conscription and numbers of weapons.” (Abridged from publisher’s description)

Passchendaele : the anatomy of a tragedy / Andrew Macdonald.
“This extensively researched book tells the story of one of the darkest hours of Australia and New Zealand’s First World War military. With the forensic use of decades-old documents and soldier accounts, it unveils for the first time what really happened on the war-torn slopes of Passchendaele, why, and who was responsible for the deaths and injuries of thousands of soldiers in the black mud of Flanders. Macdonald explores the October battles of Third Ypres from the perspective of the generals who organised them to the soldiers in the field, drawing on a wide range of evidence held in Australia, New Zealand, Canada, Britain and Germany. His book is far more than a simple narrative of battle and includes critical and comparative assessments of command, personality, training discipline, weapons, systems, tactics and the environment. It looks equally at the roles of infantry, artillery and engineering units, whether Australian, New Zealand, Canadian or British, and in so doing presents a meticulous, objective and compelling investigation from start to finish. Along the way it offers numerous unique insights that have, until now, been obscured by a nearly century-old fog of war. This book will reshape the understanding of one of the most infamous battles of the First World War.” (Publisher’s description)

The other Anzacs : nurses at war 1914-1918 / Peter Rees.
“By the end of The Great War, forty-five Australian and New Zealand nurses had died on overseas service and over two hundred had been decorated. These were women who left for war on an adventure, but were soon confronted with remarkable challenges for which their civilian lives could never have prepared them.
They were there for the horrors of Gallipoli and they were there for the savagery the Western Front. Within twelve hours of the slaughter at Anzac Cove they had over 500 horrifically injured patients to tend on one crammed hospital ship, and scores of deaths on each of the harrowing days that followed. Every night was a nightmare. Their strength and humanity were remarkable.” (Abridged from publisher’s description)

Archduke Franz Ferdinand lives! : a world without World War I / Richard Ned Lebow.
“For Lebow (A Cultural Theory of International Relations), a professor of international political theory, the erasure of WWI from our historical timeline would have placed our world on a path quite different from the one we are on today. He expounds on the theory of counterfactuals to revisit and better understand our history. “What-ifs of this kind offer insights into the world in which we actually live,” Lebow claims, letting us “probe why and how it came about, how contingent it was, and how we should evaluate it.” He begins with the assassination of Franz Ferdinand and its aftershocks, detailing what could have happened in the fields of science, art, medicine, and politics had the archduke survived. Using historical and personal records, supported by known personality traits of notable period figures, Lebow fashions two possible worlds, one better and one worse, had WWI been avoided. His confidence is evident on every page; this work of alternative history reminds us of our own position in flow of events and tempts us to follow Lebow’s lead in fantasizing about the possibilities inherent in these very distinct worlds. Though we can’t escape the realities of our past, Lebow provides his readers with exciting alternatives to consider.” (Publisher Weekly)

Gallipoli : the final battles and evacuation of Anzac / David W. Cameron.
“This book is the first book since Charles Bean’s Official history to provide a detailed narrative of the bloody and tragic battle for Hill 60, along with the other engagements that went on until the very last days at Anzac – viewed from both sides of the trenches. It also examines in detail the planning and execution of the evacuation of the troops from Anzac – the most successful part of the whole Gallipoli fiasco. David Cameron’s detailed research and use of firsthand accounts including letters, diaries, and interviews, enables him to convey the confusion of battle while also telling a good story with a powerful emotional impact” (Back cover)

Meetings in no man’s land : Christmas 1914 and fraternization in the Great War / Marc Ferro … [et al.] ; translations by Helen McPhail.
“In the winter of 1914, after long months of marching, soldiers on both fronts began to dig trenches and the war became a battle of attrition in which ordinary men faced each other across the bombed mud of No Man’s Land. The enemy lines were often no more than a few yards away, the soldiers of both sides in equal desperation, surrounded by carnage and horror. Out of this hardship came a shared feeling which was demonstrated in the unofficial armistice of Christmas 1914, when German and English soldiers laid down their weapons for a blessed moment of peace, played football and swapped food.
In this book, four international experts look at the story of Christmas 1914 and the evidence that fraternization was far more common than previously accepted. Using new research, the book explores these brief moments of humanity on all fronts and throughout the conflict, and shows them to have been not only prevalent but also vital, long ignored, factor in the war. For the French, defending their home territory, fraternization was the last taboo and until now omitted from the record.
Meetings in No Man’s Land reveals a story of the Great War that has long been forgotten or lost in censored official reports or officer journals, and brings new light to the harrowing experience of the ordinary soldier’s life in the trenches.” (Publisher’s description)

The Great War handbook [electronic resource] : a guide for family historians & students of the conflict / Geoff Bridger ; foreword by Cornelli Barnett.
“Geoff Bridger’s The Great War Handbook answers many of the basic questions newcomers ask when confronted by this enormous and challenging subject not only what happened and why, but what was the Great War like for ordinary soldiers who were caught up in it. He describes the conditions the soldiers endured, the deadly risks they ran, their daily routines and the small roles they played in the complex military machine they were part of. His comprehensive survey of every aspect of the soldier’s life, from recruitment and training, through the experience of battle and its appalling aftermath, is an essential guide for students, family historians, teachers and anyone who is eager to gain an all-round understanding of the nature of the conflict. His authoritative handbook gives a fascinating insight into the world of the Great War – it is a basic book that no student of the subject can afford to be without.” (Syndetics summary)