Strange but true tales of car collecting and the history of the London Underground are included here. 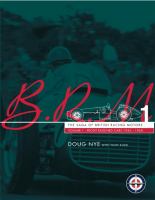 BRM : the saga of British racing motors / Doug Nye and Tony Rudd.
“Re-issue of an award-winning book which has been described as the most comprehensively researched and written history ever produced of a Formula 1 racing team. Doug Nye is the world’s most respected author and researcher on the historic racing scene and Tony Rudd’s distinguished motor industry career included many years as BRM designer and chief engineer. Little wonder, then, that their first volume of BRM v the Saga of British Racing Motors was hailed as the most detailed and authoritative history of a grand prix team ever published… Having unique access to the BRM company files, the authors have delved deeply into the emotion-charged background to the BRM team’s creation, its near-collapse and then its troubled survival prior to its final emergence as a front-running Grand Prix team. The team’s creator Raymond Mays and its great benefactor Sir Alfred Owen, as well as drivers like Stirling Moss, Juan Manuel Fangio, Froilan Gonzales, Tony Brooks, Jo Bonnier and many other stars of the past all figure prominently in this remarkable motor racing saga.” (adapted from Syndetics summary)

Working the London Underground from 1863 to 2013 / Ben Pedroche.
“Used extensively and somewhat taken for granted by millions of commuters and tourists every day, the London Underground has long been a part of our national heritage and way of life. It was the first underground railway in the world, and is now central to lives of millions of Londoners. Here Ben Pedroche explores the realities of building the railway from the beginning, 150 years ago, exploring this dangerous, back-breaking job and how it culminated in the rail system we see today. He works his way through the construction and working history of this iconic system, until reaching modern day, including stories from London Underground workers and their real-life experiences. Backed up with sixty stunning archive and modern photographs, this is a book that anyone interested in the London Underground or London history cannot do without.” (Syndetics summary)

“Strange but true tales of car collecting : drowned Bugattis, buried Belvederes, felonious Ferraris, and other wild stories of automotive misadventure / by Keith Martin and Linda Clark.
“Keith Martin and the staff of “Sport Car Market Magazine” recount the wildest car-collecting stories of all time, focusing on tales of the most eccentric and over-the-top collectors and collections. Have you heard of the fellow who squirrelled away dozens of Chevelles, Camaros, and other classic muscle cars in semi trailers? How about the president of Shakespeare fishing rods who in the 1960s sold 30 now-priceless Bugattis for a mere $85,000? The English nobleman who cut up and buried his Ferrari horde in an elaborate insurance scam? Or how about the Duesenberg abandoned in a Manhattan parking garage for decades and uncovered by “Tonight Show” host Jay Leno? These are just a few of the amazing stories explored in this entertaining book, a must-have title for any car enthusiast.” (adapted from Syndetics summary) 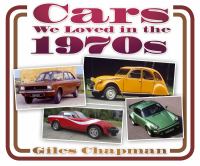 Cars we loved in the 1970s / Giles Chapman.
“The 1970s saw some ground-breaking new metal in British showrooms – the Renault 5 established the new ‘supermini’ class, the Volkswagen Golf gave the average family car a hatchback and top quality, the Ford Capri made sporty cars available to everyone and, despite all of this, that old favourite the Ford Cortina continued to rule the sales charts. Yet it was a funny old time to be a driver, the 1970s. Britain started to experience a love/hate relationship with the four-wheeled machine that, previously, symbolised nothing but speed and freedom. The economic rollercoaster sent fuel prices soaring, while the country’s roads could barely handle all the cars jostling to use them. And those cars themselves… it seemed British manufacturers, beset by striking workers and falling quality standards, were stalling as Japan’s Datsuns, Hondas and Toyotas cruised off with contented customers. Britain’s new Rover 3500 was exciting and the Jaguar XJ12 an awesome engineering achievement, but the solid quality of BMWs and Mercs made more sense. Giles Chapman documents the whole turbulent decade in this fascinating and entertaining book through the cars that dominated our motoring lives and explaining how the much-maligned Morris Marina and Reliant Robin actually helped drivers out of a jam.” (Syndetics summary) 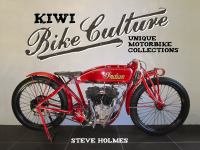 Kiwi bike culture : unique motorbike collections / Steve Holmes.
“”Delves into the love affair New Zealanders have with their motorbikes. From Harley-Davidsons to Vespas, and everything in between, this book is about the men and women whose lives revolve, in some way, around two-wheeled machinery.” (Back cover) 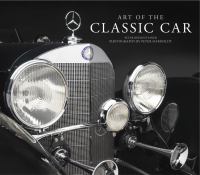 Art of the classic car / photography by Peter Hardoldt [sic] ; words by Peter Bodensteiner.
“For folks who enjoy the automobile as art, here is another sumptuous coffee-table book from Motorbooks. Photographer Harholdt (The Allure of the Automobile: Driving in Style, 1930-1965) gives classic cars the full treatment, with an oversize spread shot of each automobile and smaller photos of the engine, the interior and upholstery, and any other attractive parts, such as the hood ornaments. The classic cars included range from a 1911 Mercer 351L Runabout to the 1941 Chrysler Town & Country, with the rest of the cars from the 1920s and 1930s. -Duesenbergs, Delahayes, and other rare vehicles only seen in museums or at prestigious car shows star on these pages. There is minimal text by Bodensteiner (founder, Stance & Speed Pub.), just enough to identify the car, a few specifications, and sometimes a tidbit of interest.” (adapted from Syndetics summary) 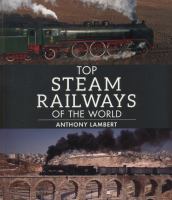 Top steam railways of the world / Anthony Lambert.
“Less than 50 years ago, trains were routinely hauled by majestic steam-powered locomotives. These magnificent machines still exercise a powerful hold on our imagination, conjuring up the romance of oldfashioned rail travel and the excitement of human ingenuity pitted against the challenges of narrow passes, tight bends and fearsome gradients. Although the heyday of steam has passed, it is still possible to travel on preserved lines, heritage railways and industrial lines where steam traction is still in use. Many of these journeys have been made possible by the dedicated efforts of steam enthusiasts, who have struggled to acquire, keep open and refurbish routes that railway companies had earmarked for closure. This book profiles 26 of these remarkable journeys, ranging from the popular Ffestiniog Railway in northern Wales to the Changa Manga Forest Railway of Pakistan. Each chapter sketches the story behind the journey and details the locomotives that are in use, illustrated throughout with spectacular photography.” (Syndetics summary)

Down to the sea in ships : of ageless oceans and modern men / Horatio Clare.
“For millennia, the seaways have carried our goods, cultures and ideas, the terrors of war and the bounties of peace – and they have never been busier than they are today. But though our normality depends on shipping, it is a world which passes largely unconsidered, unseen and unrecorded. Horatio Clare joins two container ships, travelling in the company of their crews and captains. Together they experience unforgettable journeys. In Clare’s vibrant prose a modern industry does battle with implacable forces, as the ships cross seas of history and incident, while seafarers unfold the stories of their lives, telling their tales and yarns.” (adapted from Syndetics summary)