This Saturday, 18 January 2014, is an extra special one in the Wellington City Libraries’ calendar because our Central Library gets a very exciting neighbour for the day!

Out In The Square was established in 1986 as a fair for a fair law, and this year New Zealanders have another reason worthy of a mighty celebration – the passing of the Marriage Equality Bill. The fair has a fantastic line up of performers, including one of New Zealand’s top performing artists  – Anika Moa!

The all-day fair is a vibrant experience including stalls, food, entertainment and fun in the sun.  The free event is family-friendly, with thousands of people celebrating the Queer community in Wellington‘s Civic Square.

In anticipation of the passing of Louisa Wall’s Marriage Amendment Bill in Parliament last year Wellington City Libraries stocked up on same-sex marriage books, below are some nifty wedding planners, political discussions, and picture books from our physical collection. We also have a growing range of LGBT eBooks in our online collections (including some great romances for all the single ladies ;-p).

Here come the brides! : reflections on lesbian love and marriage / edited by Audrey Bilger & Michele Kort.
“Though there are countless books on LGBT marriage and on lesbian relationships, this is the first anthology that approaches same-sex marriage between women not as a political destination but as a complex cultural phenomenon. Bilger (literature & gender studies, Claremont McKenna Coll.; Laughing Feminism: Subversive Comedy in Frances Burney, Maria Edgeworth, and Jane Austen) and Kort (senior editor, Ms.; Soul Picnic: The Music and Passion of Laura Nyro) bring together photographs of brides, comics, poetry, and, most of all, personal stories that illustrate the multifaceted world of lesbian marriage. There is real courage in these pages-honest, heartfelt accounts of friends who reject the institution of marriage and families that reject the brides, trans-women’s visions of their own walk down the aisle, the bittersweet regrets of lesbian divorcees, and the unabashed joy felt by many women when their right to marry is validated. No lesbian anthology is complete without the voice of lesbian rights pioneer Phyllis Lyon, who married her longtime partner Del Martin in the first gay marriage performed in California. She is interviewed here by National Center for Lesbian Rights executive director Kate Kendell. Verdict? Required reading for all students of civil rights and marriage equality.” (Library Journal)

The complete guide to gay and lesbian weddings / K.C. David, and the experts at GayWeddings.com ; photography by Wendy Paton.
“Your Wedding Team is Here! Let GayWeddings.com help you and your partner plan a ceremony that suits your taste and budget without causing you to lose your mind in the process. The absolute authorities for same-sex unions on the Web, K. C. David and his devoted staff of experts are at your side from the proposal to the honeymoon.” (Syndetics summary)

Together forever : gay and lesbian couples share their secrets for lasting happiness / Eric Marcus.
“Traveling across the United States, Eric Marcus met and interviewed forty gay and lesbian couples who have achieved the dream of a happy, lasting relationship. In Together Forever, Marcus writes about their lives and the secrets to long-term happiness these couples have learned over the nine to fifty years they’ve been together. From Together Forever: On Meeting:áá”I said to myself, ‘That’s it. ‘ I don’t know what ‘it’ was, but there was just something that was apparent to me right then–it was just a very deep sense of recognition that something was there that you had looked for all of your life. And it was there when you least expected it. “–Anyda, eighty-six On Difference:áá”The icing on the cake was after we had sex, after this very lovely experience with Curt, he said, ‘Do you want milk and cookies?’ And I thought, He’s like a big girl, you know? And we’re sharing vanilla wafers and milk in bed. And I finally got it at that point. That leather coat, the jeans, everything, it was just a fashion statement. “–Brian, thirty-five On Monogamy:áá”I really believed in nonmonogamy as an ideal…I still think if we worked really hard on making nonmonogamy work, we could probably do it, but I can probably learn Chinese, too. Look, I’m a vegetarian, but I still have a leather couch. No one’s perfect.”–Lindsy, fifty-two On What Makes a Happy Relationship:áá”I feel that it’s the same secret between a gay couple or a lesbian couple as a heterosexual couple. It’s sharing. It’s giving a little, taking a little. Because if everything is going to be only about me, me, me, it’s not going to be a good relationship. ” (Syndetics summary) 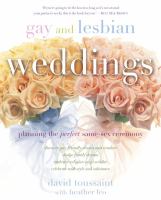 Gay and lesbian weddings : planning the perfect same-sex ceremony / David Toussaint, with Heather Leo.
“Comprehensive, fresh, and funny, Gay and Lesbian Weddings covers everything you need to know to plan the wedding of your dreams. Unlike other wedding planners, this one tackles the issues your heterosexual friends never had to consider. For instance, do you come out to Aunt Gloria before she receives the invitation and the shock of her life? Which father of the bride pays for a lesbian wedding? Who walks down the aisle first? Is it possible for members of the wedding party to be happy with what you force them to wear? (Okay, this is a universal problem.) Step-by-step and down-to-earth, Gay and Lesbian Weddings includes invaluable advice on the changing laws regarding gay marriage in the United States and abroad; the differences among domestic partnerships, civil unions, and marriage budget concerns: choosing your ideal wedding size and style finding gay-friendly printers, photographers, gift registries, caterers, florists (actually, if you find a gay-hostile florist, we’d love to hear about it) ethnic, theme, and destination weddings keeping the honey in the honeymoon sex–including how to keep the heat after the wedding night, as well as the facts on fidelity (can the two be linked?) Plus: a handy Wedding Countdown Calendar, website resources, and true stories from same-sex couples who’ve gotten hitched without a hitch Gay and Lesbian Weddings gives you straight talk (so to speak) with equal parts information, flair, and fabulousness!” (Syndetics summary) 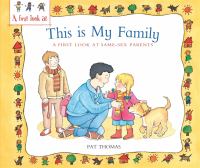 This is my family : a first look at same-sex parents / Pat Thomas ; illustrated by Lesley Harker.
“This text introduces children to families that have parents of the same sex. Whether a family has a mum and a dad, or two mums or two dads, this book shows that all parents love, care, and support their children in the same way.” (Library catalogue)

Two golden rings : a chapbook of poetry celebrating the wedding of David Marshall and Larry Corse / Larry Corse ; with an epithalamium by Brad Fairchild.

Outlaw marriages : the hidden histories of fifteen extraordinary same-sex couples / Rodger Streitmatter.
“Profiles fifteen couples who made major contributions to this country in an impressive range of fields–from music and education to journalism and modern art.” (Library catalogue) 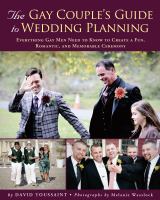 The gay couple’s guide to wedding planning : everything gay men need to know to create a fun, romantic, and memorable ceremony / by David Toussaint ; photographs by Melanie Wesslock and Katje Hempel.