New books on cars and transport, beginning with the cars that have been made in New Zealand as a cottage industry.

New Zealand manufactured cars: a cottage industry / Patrick Harlow.
“At one stage almost all the cars sold in New Zealand were assembled in this country by big names….. during this time New Zealand was also the producer of many home grown cars and still is, but on a much smaller scale. The companies that produced these cars were forced to work on a shoestring budget and could not afford advertsing campains to make their car known. This book looks at the vehicles which make up an imortant part of our motoring heritage.” (Book jacket)

Comet! : the world’s first jet airliner / Graham M. Simons.
“The De Havilland Comet made history when it became the world’s first production commercial jetliner in 1952. However, thanks to a spate of high-profile accidents, the Comet never fulfilled its early potential. Extensively illustrated throughout, this book features details lifted directly from enquiry and salvage reports, much of which has never been published before and offers a unique insight into the failures and tragedies that blighted the early days of development, laying down lessons that were ultimately to benefit later designs.” (Syndetics summary) 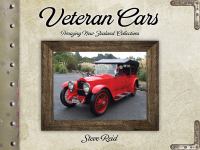 Veteran cars : amazing New Zealand collections / Steve Reid.
“The veteran car movement is alive and well in new Zealand. With just a few spare parts and a couple of old photographs available to their owners in some cases, the cars have risen from the dead. Many parts had to be handmade by talented craftsmen with skills almost lost forever and, while the names of some of the manufacturers will be known to readers as they are still producing cars today, many marques featured in this book have long since been confined to motoring history.” (Book jacket)

Mapping the roads : building modern Britain / Mike Parker.
“The story of Britain’s road development also reflects the story of the nation’s political, economic and social history. From the old ways to the motorways, ‘Mapping the Roads’ charts the ambitions and hopes of the country through maps.” (Syndetics summary)

The ride : new custom motorcycles and their builders / edited by Chris Hunter and Robert Klanten ; with texts by Paul d’Orléans, David Edwards, and Gary Inman.
“In the motorcycle scene of 1960s Britain, it was frowned upon to drive a motorcycle as it was produced in a factory. Following in this historical tradition, The Ride focuses on those who are creating customized motorcycles that come as close to one’s own vision of how pure riding should be as possible. For example, the creative young people who are buying old, wrecked bikes on eBay, removing everything but the motor and frame, and then rebuilding them in ways that are as radical and subversively creative as they are knowledgeable and respectful of tradition. The archetypes of the new motorcycles created in this way–classic board racers, bobbers, cafe racers, and choppers–may very well be 30-50 or even 80 years old, but what is made out of them is new, not retro.” (Book jacket)

The rocket man and other extraordinary characters from the history of flight / David Darling.
“Science writer Darling provides an eclectic collection of aviation biographies in this delightful salute to a series of largely overlooked flight pioneers. Reaching back to trend-setting balloonist Sophie Armant, who was an early nineteenth-century celebrity until her fiery end, Darling then highlights a multitude of unsung heroes, including the inspiration for The Great Waldo Pepper (1975); the original X-Men (as in the men who flew the sound barrier-busting X-planes); and William Weaver, the Lockheed test pilot who survived the breakup of his SR-71 at a speed of Mach 3 and an altitude of 15 miles. Overall, the collection proves how very many shoulders famous names like Charles Lindbergh, Chuck Yeager, and Neil Armstrong stood upon when making it into the record books.” (adapted from Syndetics summary)

To the edge of the world / Christian Wolmar.
“On 31 May 1891, Tsar Alexander III commanded his son to travel to Vladivostok and lay the first stone of a vast Russian transcontinental railway line. When it was completed, twenty-six years later, it was one of the greatest engineering achievements ever known, crossing seven times zones and 5,750 miles. …During the construction of the railway, engineers battled the natural obstacles of ice, rivers and enormous lakes, while workers on the line endured temperatures of thirty degreees below zero.” (Book jacket)

A passion for flight : New Zealand aviation before the Great War / Errol W. Martyn.
“Wheras Volume Two of A Passion for Flight concentrated on civil aviation during 1910-1914, this third and final volume focuses primarily on the mititary aspect.
…A detailed account of new Zealand’s pre-war approach to military aviation development explains why a cautious policy was adopted and how progress was limited in large part by the Government’s 1909 decision to create a large territorial force and to introduce compulsory military training…” (Book jacket) 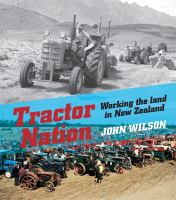 Tractor nation : working the land in New Zealand / John Wilson.
“A popular history of that essential piece of farm equipment – the tractor – in New Zealand, including profiles of specific vintage tractors that have been lovingly restored by their owners. Tractor Nation is a look back at how the role of the tractor has changed, from the time they took over from working horses, to present day developments and the latest models. Fordsons, John Deere, Kubota, Farmall, Massey Harris and then Massey Ferguson – a range of makes and models. Fully illustrated with historic shots of tractors at work in the early nineteenth century right through to portraits of restored tractors, and some of the newest tractors available today.” (Syndetics summary)

The life of the automobile : the story of the motorcar / Steven Parissien.
“Steven Parissien examines the impact, development and significance of the automobile over its turbulent and colourful 130-year history. The story of the auto, and of its creators, from its earliest appearance in the 1880s – as little more than a powered quadricycle – via the early pioneer carmakers, the advances of the interwar era, the “Golden Age” of the 1950s and the iconic years of the 1960s to the decades of doubt and uncertainty following the oil crisis of 1973, which culminated in the global mergers of the 1990s and the bailouts of the early twenty-first century. ‘The Life of the Automobile’ is a tale of people: of intuitive carmakers such as Benz, Agnelli, Royce and Citroën; of exceptionally gifted designers such as Issigonis, Lefebvre, Michelotti and Bangle; and of visionary industrialists such as Ford, Tata and Porsche.” (adapted from Syndetics summary)