Welcome to the September Fiction newsletter. We have selected the best of the new fiction selected for this month’s Recent Picks. New Other Genre selection this month features Debut Novels from some amazingly talented writers, and judging by these their first published works, future successful literary careers seem certain.

New novels from well known popular authors feature in all our Recent Picks which include contemporary fiction, science fiction & fantasy, mysteries and graphic novels. So there will be many ‘must reads’ for most avid fiction readers.

IA great selection of new contemporary fiction has been added to our collection this month, with new titles from many popular authors. Highly recommended is the very different suspense thriller from Liz Jensen titled, The Uninvited.

Maya’s notebook : a novel / Isabel Allende ; translated from the Spanish by Anne McLean.
“Abandoned by her parents as a baby, Maya has been brought up by her tough grandmother Nini and her gentle grandfather Popo. At school though, teenage Maya finds herself drawn towards the wrong crowd. Before she knows what’s happened, Maya’s life has turned into one of drug addiction and crime. Things go from bad to worse as Maya disappears into the criminal underworld. To save her from her old associates, Nini sends Maya to a remote island off the coast of Chile. Here she lives among a traditional rural people, the Chilote, who have remained untouched by the materialism of the modern world. Basking in the warmth of the Chiloé community, Maya feels compelled to write her story and slowly she begins to heal. But can she move beyond her pain, find forgiveness and learn to live with the scars of the past?” (Adapted from Amazon.co.uk)

The uninvited / Liz Jensen.
“A gripping apocalyptic thriller, this one told from the point of view of a British man with Asperger’s syndrome who works for a consulting firm. Hesketh Lock isn’t sure what to make of an unsettling pattern that’s emerging around the world: formerly loyal employees are taking their own lives after committing acts of corporate sabotage. As the cases pile up, Hesketh tries to find a link between them while also making note of an even more terrifying trend: children are turning on their families, often resulting in fatal attacks.” (Adapted from Syndetics summary)

Black Venus : a novel / James MacManus.
“Set in bohemian Paris in the late nineteenth century, Black Venus follows the rise and fall of the poet and translator Charles Baudelaire and his tempestuous relationship with his Haitian mistress, Jeanne Duval. Muse of many Parisian artists, Duval sits for paintings by Manet and inspires some of Baudelaire’s finest erotic poems, becoming one of the most mysterious beauties of her time. Meanwhile, Baudelaire seeks to defend his famous collection of poetry, Les Fleurs du Mal, against public charges of obscenity while at the same time sinking into an opium- and alcohol-induced depression.” (Adapted from Syndetics summary)

This month all the graphic novels selected were anthologies or collections of stories by one author. Included was the New Zealand graphic novel anthology titled, Faction: kiwi comic anthology, a great collection of local talent. 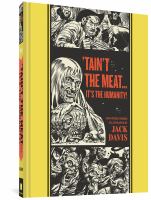 ‘Tain’t the meat… it’s the humanity! : and other stories / illustrated by Jack Davis ; written by Al Feldstein, Otto Binder and Carl Wessler.
“With a mix of terror and mocking humor, each of these tales is introduced by the pun-obsessed Crypt-Keeper, greedy businessmen, jealous husbands, and cheating wives meet grisly fates, graphically depicted, at the hands of their revenge-seeking victims or from werewolves or vampires.” (adapted from Syndetics summary)

Faction : kiwi comic anthology. 1 / [edited by Damon Keen and Amie Maxwell].
“Featuring a ripping collection of some of New Zealand’s best comic creators, Faction showcases and celebrates the enormous talent that exists in this neglected Kiwi art form. Stories range from deep space, to the Arctic Circle and from ancient Greece to the far future. Faction is New Zealand’s first crowd funded comic anthology – printed with the support of fans on PledgeMe.” (adapted from Syndetics summary) 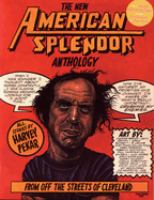 The new American splendor anthology / by Harvey Pekar ; [art by Chester Brown et al.]
“American Splendor is the series that sparked a revolution in comics and brought graphic novels to the attention of post-adolescent readers everywhere. This anthology is the best of American Splendor and other comics by Harvey Pekar, including never-before-seen material.” (adapted from Syndetics summary)

In our section of new mysteries this month we highlight the most recent novels from the always popular writers, Jeffery Deaver, R. J. Ellory, and Walter Mosley

The kill room : a Lincoln Rhyme novel / Jeffery Deaver.
“Lincoln Rhyme and partner Amelia Sachs investigate a controversial, politically charged case involving the assassination in the Bahamas of a U.S. citizen at the behest of the director of the National Intelligence and Operations Service (NIOS). Although Moreno, a New York City resident, long harbored hatred for the U.S. exploitation of the Central and South American economies, Nance Laurel, the New York assistant district attorney, will not permit the U.S. government to abuse, ignore, and avoid the law; hence, the extensive search for witnesses. However, NIOS director Shreve Metzger learns of the investigation and, in turn, orders his assassin, Jacob Swann, to systematically minimize and/or eliminate anyone aware of his Special Task Order…” (Adapted from Syndetics summary)

The devil and the river / R.J. Ellory.
“When the rains came they found the girl’s face. Just her face. At least that was how it appeared…On a perfect summer evening in 1954, sixteen-year-old Nancy Denton walked into the woods of her hometown of Whytesburg, Mississippi. She was never seen again. Two decades on, Sheriff John Gaines witnesses a harrowing discovery. A young woman has been unearthed from the riverbank, her body perfectly preserved, yet she bears evidence of a brutal ritualistic killing. Nancy has come home at last, but her return does not bring closure to her family, nor to the townsfolk of Whytesburg. Already haunted by his experiences in Vietnam, Gaines must now stretch his abilities to the limit, pushing himself ever closer to breaking point. What really happened to the beautiful and vivacious Nancy? And why do her friends refuse to talk? As Gaines closes in on the truth, he is forced to not only confront his own demons, but to unearth secrets that have long remained hidden. And that truth, so much darker than he could ever have imagined, may be the one thing that finally destroys him…” (Description from Amazon.co.uk)

Little Green / Walter Mosley.
“In 2007’s Blonde Faith, set in 1967, Easy Rawlins drove drunkenly off a cliff in what his creator indicated was likely his last appearance. Now, after two months of sliding in and out of consciousness, Easy begins the long journey back to the living, in Mosley’s superb 12th mystery featuring his iconic sleuth. Saved by Ray “Mouse” Alexander and the ministrations of Mama Jo, Easy is asked by Mouse to find Evander “Little Green” Noon, who went clubbing on the Sunset Strip and disappeared. Weakened but determined to keep moving, Easy is buoyed by Mama Jo’s potent brew she calls “Gator’s Blood” and the support of numerous friends, including Martin Martins and Jackson Blue…(Adapted from Syndetics summary)

Included in the Science Fiction and Fantasy novel selection this month are the latest novels from most popular writers, Brian Aldiss, Ben Bova, and Terry Brooks.

Finches of Mars / Brian Aldiss.
“Set on the Red Planet, this book follows the stories of a group of colonists and the problems they have in setting up a new society. Life can be sustained by technology but new life will not prosper as the women on the planet only ever give birth to stillborn children.” (adapted from Syndetics summary)

New Earth / Ben Bova.
“The discovery of another Earth-like planet causes the launch of an exploratory team to study the planet now called “New Earth.” Upon arrival, however, the team discovers a welcoming committee of creatures indistinguishable from humans. Mission leader Jordan Kell comes to trust these inhabitants, but other team members suspect a sinister motive beneath the friendly facade.” (adapted from Syndetics summary)

Witch wraith : the dark legacy of Shannara / Terry Brooks.
“This is the third and final book in the Dark Legacy of Shannara series. For centuries, the Four Lands enjoyed freedom and peace, protected by a magical barrier from the dark dimension known as the Forbidding. But now the unthinkable is happening: the ancient wards securing the border have begun to erode and the monstrous creatures imprisoned there are poised to spill forth, seeking their revenge. Young Elf Arling Elessedil possesses the means to close the breach, but her efforts may be doomed when she is taken captive. The only hope lies with her determined sister Aphen, who bears the Elfstones and commands their magic. Now the fate of their world rests upon her shoulders.” (adapted from Amazon.co.uk)

New Other Genre novels this month focused on Debut Novels, show casing the talent and skill of new authors. Highly recommended is Eugen Ruge’s novel titled, In Times of fading Light: the story of a family.

The humorist / Russell Kane. “Survivor, genius, critic, and murderer. Meet Benjamin White, blessed since his infancy with an extraordinary gift; to understand humour at its deepest level. Yet Benjamin is cursed, too; in all his life he has never laughed or smiled. At the height of his profession as a comedy critic, yet lacking any kind of human empathy, Benjamin discovers a formula that will allow him to construct the most powerful joke the world has ever known a joke that has the power to kill.” (Adapted from Amazon.co.uk)

The other typist / Suzanne Rindell.
“New York City in the 1920s is a time of speakeasies and bathtub gin, an era when women smoke in public and bob their hair. An orphan raised by nuns, Rose Baker has learned to follow the rules as a means of self-preservation. Now employed as a typist in a New York City police precinct, she transcribes confessions that will eventually become irrefutable evidence in court. When an enchanting typist named Odalie joins the precinct, everything changes. Despite her better judgment, Rose is soon under Odalie’s spell. Rose quickly learns that there are several versions of Odalie’s past, and much to Rose’s chagrin, the importance of knowing which is true becomes increasingly less important as time goes on. What begins for Rose as the promise of the close friend she never had quickly becomes a complicated mess of lies, deceit, and insanity.” (adapted from Syndetics summary)

In times of fading light : the story of a family / Eugen Ruge ; translated from the German by Anthea Bell.
“This evocative family chronicle spans nearly 60 years and begins in 2001 as Alexander Umnitzer, who has just been diagnosed with terminal cancer, leaves behind his ailing father to fly to Mexico, where his grandparents lived as exiles in the 1940s.The novel then takes us both forward and back in time, creating a panoramic view of the family’s history: from Alexander’s grandparents’ return to the GDR to build the socialist state to his father’s decade spent in a Gulag for criticising the Soviet regime to his son’s desire to leave the political struggles of the twentieth century in the past.” (Adapted from Amazon.co.uk)