If you haven’t already, come along to the Central Library to see our Pixie Williams: The Voice of Blue Smoke display – it is looking (and sounding!) fabulous.

To round up the display, we will be having a talk on Tuesday 1 October at 6pm. Chris Bourke, author of Blue smoke : the lost dawn of New Zealand popular music, 1918-1964, will be speaking on the significance of Pixie Williams and Ruru Karaitiana’s hit ‘Blue Smoke’; New Zealand’s first pop song. Come along and learn more about the iconic New Zealand track and the woman behind it, as well as the city at the centre of the song’s production – Wellington in 1948. 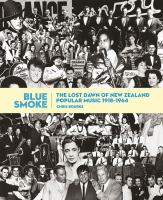 Blue smoke : the lost dawn of New Zealand popular music, 1918-1964 / Chris Bourke.
“Bringing to life the musical worlds of New Zealanders both at home and out on the town, this history chronicles the evolution of popular music in New Zealand during the 20th century. From the Kiwi concert parties during World War I and the arrival of jazz to the rise of swing, country, the Hawaiian sound, and then rock’n’roll, this musical investigation brings to life the people, places, and sounds of a world that has disappeared and uncovers how music from the rest of the world was shaped by Maori and Pakeha New Zealanders into a melody, rhythm, and voice that made sense on these islands. The accompanying audio CD wonderfully brings to life the engaging text, underscoring seminal moments in New Zealand’s musical history.” (Syndetics summary)

You can place a reserve on Pixie’s album, Pixie Williams: For the Record, below:
For the record : the Pixie Williams collection, 1949-1951.