With Mt Tongariro bursting into life, and Mt Ruapehu possibly about to erupt, it is probably a good idea for us to acquaint ourselves with their past.

Mount Ruapehu: Probably the most well known of all of New Zealand’s volcanoes. A major eruption occurs at this mountain every 50 years or so, the last of which being the 1995-96 eruption series, with smaller single eruptions in-between.

Ruapehu erupts / Karen Williams.
In September 1995 Ruapehu burst into life after a period of restlessness. The raw power of the ensuing eruptions captured worldwide attention as towering columns of roiling ash and steam, torrential mud-flows and incandescent lava bombs presented an ongoing spectacle. Now including coverage of the plans painstakingly put in place to avoid another Tangiwai disaster when the crater lake burst, and the sudden eruption in September 2007 which nearly killed climber William Pike. “Ruapehu Erupts”  celebrates the drama and magic of these eruptions and lahars and provides a stunning record of the latest chapter in the continuing story of this unpredictable volcano. (Amazon.co.uk)

Eruption! : Mount Ruapehu awakes / Bruce Houghton, Vince Neall and David Johnston.
“Events during the eruptions of Mt Ruapehu in 1995-96 are presented in text and colour photographs. Two of the authors are members of the Institute of Geological and Nuclear Sciences team which monitors the volcano; Vince Neall leads a team from Massey University studying lahars and the effects of ash fall.” (Syndetics summary)

Mount Tongariro: Last active in the 1800’s, Tongariro has burst into life again, closing parts of the world famous crossing. Tongariro consists of 12 cones and craters including Mount Ngauruhoe, which was previously active in the mid 70’s. 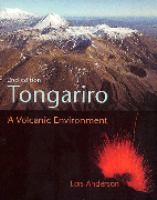 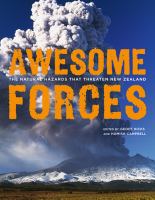 Awesome forces : the natural hazards that threaten New Zealand / edited by Geoff Hicks and Hamish Campbell.
Storms, landslides, earthquakes, volcanoes, tsunami – all New Zealanders will encounter at least one of these hazards in their lives.  Informative, generously illustrated, and written by some of New Zealand’s leading scientists, this massively revised and updated edition of Te Papa Press’ bestselling title is now more relevant than ever.
With all-new information on climate change and the social and emotional impact of disasters, this book is a fascinating and essential resource.
Produced in association with EQC and GNS Science. (Te Papa Press)