On 27 October 1904 the first underground New York City subway line opened. It is one of the oldest, and also one of the largest by number of stations (468) and by total length of routes (337km). Check out some of our books on subways, metros and other underground railways.

722 miles : the building of the subways and how they transformed New York / Clifton Hood.
“The New York subway was the vision of a few enlightened politicians working with a tight-knit mercantile elite who saw the potential that a high-speed underground rail system would have as a vehicle for urban development. Hood (American history, Hobart and William Smith Coll.) tells the fascinating story of the individuals who created this unparalleled achievement of civil engineering. This concise, scholarly history describes the impact on urban life and the creation of new neighborhoods (the Upper West Side, Harlem, Jackson Heights) separated only by a nickel fare from the heart of the city. Hood chronicles the changes in the city’s political climate, from a laissez-faire mood at the onset of the century through the rise of the progressive reform movement, concluding in the big-government era of the 1950s.” (drawn from Library Journal, courtesy of Syndetics) 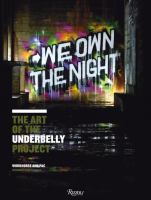 We own the night : the art of the Underbelly Project : New York Mar 2009-Aug 2010 / curators, Workhorse, PAC ; editors, Emeht Agency, Jiae Kim, John Lee.
“Having discovered a never-completed subway station in Brooklyn, two street artists-Workhorse and PAC-brought in artists from around the world to reclaim the space with original artwork. From the spring of 2009 to the summer of the following year, the Underbelly, as it came to be called, became a subterranean gallery, accessible only to those few who knew where to find it. Conceived in part as a commentary on the commodification of street art, notable figures such as Ron English, graffiti progenitor Haze, as well as the lesser known Dick Chicken and Indigo, sometimes hid from MTA workers or police in complete darkness for hours. Works such as Mint & Serf’s graffiti inflected dismantling of the American flag a la Jasper Johns or Trustocorp’s deconstruction of commercial art resonate with more conceptual pieces, such as Jeff Stark’s site-specific performance, in which the tuxedo clad artist served a multi-course dinner to two well-dressed friends in the underground space. The works in the Underbelly deliberately set themselves outside of traditional spaces for art and commerce, destined to be largely unseen firsthand. It is fitting-though tragic-that shortly after word of the space reached the press, the MTA sealed off access to the station. This book itself then becomes a testament to art for its own sake, an artifact of a project that posed the provocative question: “If no one will see it, will it still be important?” (drawn from Publisher Weekly, courtesy of Syndetics) 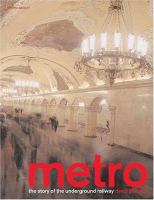 Metro : the story of the underground railway / David Bennett.
“In Metro, writer and engineer David Bennett gives a comprehensive insight into the rise of underground travel over the past 150 years.He traces the technological progress – from the risky breakthroughs in tunnelling techniques that made underground travel possible to the innovations that have made it safer and more pleasant, such as the move from coal-burning locomotives to the electrification of the line and the evolution of the first wooden carriages into the air-conditioned aluminium ones of today. He also explores the architecture of the most dramatic and inspiring stations ever built, including the clean, Bauhaus-influenced lines of Berlin’s U-Bahn, the stern grandeur of the Moscow Metro’s “socialist” architecture, and the breathtaking exuberance of the Hollywood Red Line in Los Angeles. Metro also takes an in-depth look at the cultural phenomena, such as poster art and graffiti, that have flourished on underground systems around the world. Thought-provoking, informative, entertaining, and expansively illustrated with 200 photographs, Metro reveals historical facts, heroic achievements, beautiful architectural details, and the secrets of subterranean engineering, and will appeal to historians, designers, architects, rail enthusiasts, and world travellers alike.” (Syndetics summary)

Beneath the metropolis : the secret lives of cities / Alex Marshall ; editor, David Emblidge.
“Independent journalist Marshall (How Cities Work) presents a unique and colorful view of the subterranean environments of 12 world cities. The comparatively recent settlements of New York, Chicago, Los Angeles, and Sydney are joined here by the modernizing conurbations of Mexico City, Paris, Rome, London, Moscow, Cairo, Tokyo, and Beijing. Marshall occasionally draws parallels to other cities, such as Venice, Montreal, and Boston. Utilizing interviews with architects, engineers, and planners, as well as print sources, web sites, and some on-site visits, the author details the meandering underground networks that have evolved to convey people, water, electricity, effluvia, and telecommunications. Each city has faced obstacles imposed by its geology, archaeological history, and political and social constraints. Relying on either current or past watercourses, most did not make much use of underground potential before 1800, except for Rome with its catacombs. Thereafter, alternatively cooperating and competing public and private actors constructed these cities’ underground elements.” (drawn from Library Journal, courtesy of Syndetics)

Subway lives : 24 hours in the life of the New York City subway / Jim Dwyer.
“While the subtitle’s promise of a day-in-the-life of New York City’s colossal and troubled subway system is fulfilled, and quite dramatically, this robust and crackling page-turner also contains a hard-hitting history of the rise and damn-near collapse of the 85-year-old endeavor. Columnist Dwyer has that old-time, keyboard-pounding newsroom energy, breathing life and a whiff of incredulity into his historical facts while sketching vibrant portraits of people and suspenseful accounts of their predicaments. He brandishes the staggering statistics of the subway–the numbers of riders, dollars, crimes, breakdowns–with a mixture of respect and disgust, while his tone is almost tender when he focuses on individuals. He describes the day of a singing conductor, a token-booth clerk, an assortment of riders covering the spectrum from desperate to generous, and the last of the infamous graffitists. Dwyer keeps us in a continual state of amazement, exposing destructive sweetheart deals in one chapter, while in another, recounting the miraculous story of a woman giving birth on a stalled C train. An unforgettable tale of the craziness that is New York, that is humanity.” (drawn from Booklist, courtesy of Syndetics)