Heretics, church conflicts, how to tame your tongue, and faces of compassion all feature in the recent arrivals to our beliefs shelves.

Brigham Young, pioneer prophet, by John G. Turner.
“*Starred Review* In 1859, Brigham Young declared, I love my religion above all things else. In recounting the life of a man whose devotion made him one of the titans of nineteenth-century America, Turner traces Young’s cautious investigation and then wholehearted acceptance of the radical gospel preached by the Latter-day Saints prophet Joseph Smith. This gospel meant not only a new volume of scripture (the Book of Mormon) but also priesthood ordinances sealing families in the eternities  … Turner’s broad historical perspective clarifies why Young’s ecclesiastical successors have still felt the man’s influence even after abandoning polygamy. An impressively detailed portrait of a controversial giant.   (drawn from Booklist, courtesy of Syndetics)

Change your words, change your life, by Joyce Meyer.
Words are a big deal. They are containers for power, and we have to decide what kind of power we want our words to carry, says the author. “I believe that our words can increase or decrease our level of joy. They can affect the answers to our prayers and have a positive or negative effect on our future. ….”  Topics include:  How to Tame Your Tongue ;  When to talk and when not to talk ; Speaking Faith and Not Fear ;  Do you really have to give your opinion? ; The importance of keeping your word ; The power of speaking God’s word.   (drawn from the publisher’s description) 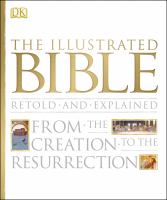 The illustrated Bible retold and explained : from the Creation to the resurrection, editor-in-chief Father Michael Collins.
Sumptuously illustrated, this large book format book is a useful introduction to the stories of the Bible. It’s coverage extends well beyond the well-known favourite stories (e.g. Noah’s ark and Paul’s conversion). The illustrations complement the text well and include paintings, landscape photos and explanations of how people lived in Bible times, archaeology, historical artefacts, and specially commissioned maps.

Just one thing : developing a Buddha brain one simple practice at a time, by Rick Hanson.
You’ve heard the expression, “It’s the little things that count.” Research has shown that little daily practices can change the way your brain works, too. This book offers simple brain-training practices you can do every day to protect against stress, lift your mood, and find greater emotional resilience. Just One Thing is a treasure chest of over fifty practices created specifically to deepen your sense of well-being and unconditional happiness. Just one practice each day can help you: – Be good to yourself – Enjoy life as it is – Build on your strengths – Be more effective at home and work – Make peace with your emotions.

Jesus : an historical approximation, by José Antonio Pagola ; translated by Margaret Wilde.
Contents include :   A Galilean Jew — Life in Nazareth — A seeker of God — A prophet of the reign of God — A poet of compassion — A healer of life — Defender of the last — A friend of women — A teacher of life — Creator of a renewal movement — A faithful believer — Combative and dangerous — Martyr of the reign of God — Raised by God — Exploring the identity of Jesus.

Embraced by God : celebrating who and whose you are, by Babbie Mason.
Babbie Mason shares her personal journey to understanding how very much God loved her, not as a singer or teacher but as His child. Here she equips readers to accept that love, and grow their confidence because of it… Babbie’s warm, creative and friendly approach will engage readers and encourage them on this blessed journey”  (drawn from goodreads)

Divine healing hands : experience divine power to heal you, animals, and nature, and to transform all life, by Zhi Gang Sha.
Zhi Gang Sha was born in China’s Shaanxi province and became interested in healing during childhood. He received a doctorate in Western medicine from Xi’an Jiaotong University and is certified in acupuncture and moxibustion. … Per his personal website, Sha’s stated mission is “to transform the consciousness of humanity and souls in the universe to create a peaceful and harmonized world and universe”. His title Tao II made the New York Times Bestseller List for 2010. (Drawn from Bowker Author Biography)

Heretics : the creation of Christianity, from the Gnostics to the modern church, by Jonathan Wright.
“A lively new examination of Christian heresy, from a historian who argues that heretical dissent helped Christianity become the world’s most powerful religion.” (Syndetics summary)

Greater : dream bigger, start smaller : ignite God’s vision for your life, by Steven Furtick.
“The death of Apple founder Steve Jobs prompted megachurch pastor and author Furtick (Sun Stand Still) to read a saying of Jesus Christ about doing great things. Jesus claimed ambitiously that disciples will not only do things they see him do but “will do greater things.” Furtick weaves stories of his own life with that of the prophet Elisha, the lesser known successor of Elijah. The spiritual fodder that Furtick squeezes from his story and that of Elisha is impressive. …Like many sermons turned book chapters, the book is full of personal and Bible stories, but seems patched together. Still, Furtick’s laugh-out-loud turn of phrase, enthusiasm, and faith pops even in print.  (drawn from Publisher Weekly, courtesy of Syndetics)

Redeeming church conflicts : turning crisis into compassion and care, by Tara Klena Barthel and David V. Edling ; foreword by Ken Sande.
“Every church will experience conflicts. How a church handles these inevitable conflicts determines its future and the spiritual health of its members. If properly approached, church conflicts can be used for spiritual growth – both individually and corporately as the body of Christ. …Two church-conflict resolution experts take readers through the Acts 15 model of approaching conflict in order to help them understand the intricacies of their church conflict.  (drawn from the publisher’s description)

Faces of compassion : classic Bodhisattva archetypes and their modern expression : an introduction to Mahayana Buddhism, by Taigen Dan Leighton ; foreword by Joan Halifax.
“This wonderful book could also be artly titled ‘An Introduction to Mahayana Buddhism.’ From Ali to Gandhi, Dylan to Thoreau, and from Gertrude Stein to Mother Theresa, Faces of Compassion introduces us to enlightened beings, the bodhisattvas of Buddhist lore. They’re not otherworldly gods with superhuman qualities, but shining examples of our own highest potential. Zen teacher and scholar Taigen Dan Leighton takes us through the ages to meet the people who have shaped history and society with their compassion and wisdom. Faces of Compassion emphasizes the universality of spiritual ideals, and the power each of us has to change our world” — www.amazon.com

Why did Jesus, Moses, the Buddha, and Mohammed cross the road? : Christian identity in a multi-faith world, by Brian D. McLaren.
“Using stories from his life and what he has gleaned, sometimes creatively, from theologians, McLaren focuses on ways Christians can reconfigure concepts such as Christology and the Trinity to build a robust emergent Christian faith that repudiates violence, coercion, and domination. Although he claims to reject a sugary Coke commercial version of interfaith “harmony,” McLaren’s utopian vision, however, might strike even his followers as overly sanguine in its downplaying of the problem of evil. Further, some of his personal anecdotes read more like Save the Children infomercials than slices of real life. Ultimately, McLaren remains worth reading, lively and passionate at translating progressive theology into a popular idiom. (drawn from Publisher Weekly, courtesy of Syndetics)