Last Sunday (30 September) marked the 57th anniversary of the death of fifties screen star James Dean in a car crash in his (now legendary) Porsche Spyder. Dean was only 24 when he died, and his star was on the rise in Hollywood — East of Eden had been released only six months earlier (he would be nominated posthumously for a Best Actor Academy Award for this film in 1956, losing out to Ernest Borgnine) and Rebel Without A Cause would be released less than a month after he died.

You can find out more about James Dean in the books and links below. We’ve also added links to his movies on the library catalogue (with added special features listed out per title!). Have a browse!

James Dean : boulevard of broken dreams / Paul Alexander.
“James Dean died on 30th September 1955, aged 24. At the time of his fatal accident he had just completed “Giant”, his third film after “East of Eden” and “Rebel Without a Cause”. Yet from this meagre career a legend was born that shows no sign of abating. He is a classic American icon, surpassed only by Marilyn Monroe and Elvis Presley, projecting an image of Fifties cool and tough-guy charm that has been vigorously mass-marketed via T-shirts, posters, calendars and countless fan clubs. This biolgraphy looks beyond the Hollywood manufactured cliche to the volatile polarities, conflicted sexuality and childhood trauma of the person himself. This portrait, based on many new and documented sources and featuring rare archive photographs, argues that Dean’s angst-ridden compliance – in public – with rigid sexual mores helped fuel the fury and electricity of his acting.” (Fishpond)

James Dean : the biography / Val Holley.
“This is the most comprehensive biography of James Dean ever written, based upon over one hundred interviews with people who have never before spoken on record. Author Val Holley delves into Dean’s early life and training on stage and in television using research that is astounding in its detail and frequently lets his sources speak in their own voices.” (Syndetics summary)

Dean / editor, Paul Duncan ; text, F.X. Feeney. (In the Movie Icons series)
“”Movie Icons” is a series of photo books that feature the most famous personalities in the history of cinema. These 192-page books are visual biographies of the stars. For each title, series editor Paul Duncan has painstaking selected approximately 150 high quality enigmatic and sumptuous portraits, colorful posters and lobby cards, rare film stills, and previously unpublished candid photos showing the stars as they really are. These images are accompanied by concise introductory essays by leading film writers; each book also includes a chronology, a filmography, and a bibliography, and is peppered with apposite quotes from the movies and from life.” (Fishpond) 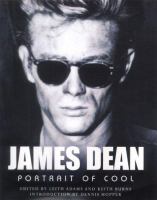 James Dean : portrait of cool / edited by Leith Adams and Keith Burns.
“I came to Hollywood to act not to charm society. The objective artist has always been misunderstood’ – James Dean. James Dean is a twentieth century icon. He remains the figure we still associate best with youthful irreverence, with rebellion and with that brand of freedom that travels with the American automobile. This book is a beautiful collection of archived material from the Warner Brothers studios, depicting Dean behind the scenes, capturing his special energy and star quality. The book also contains all the telegrams that follow the discovery of James Dean and the heart-breaking reaction of Elizabeth Taylor to his untimely death alongside the photographs from his greatest films.” (Fishpond)

(Special features on this DVD include a New York premiere TV special, a featurette on the film’s Hollywood premiere, behind the cameras segments, production stills and documents galleries & a project kickoff newsreel.)

East of Eden / directed by Elia Kazan. (DVD)
“Cal Trask is considered the “bad” son of taciturn Salinas Valley lettuce farmer Adam Trask. Although Cal always means well, he just can’t stay out of trouble. Neither is Cal able to match the high esteem in which his father holds his “good” brother Aron. Only Aron’s girl friend Abra and kindly old Doctor Sam seem to be able to see the essential goodness in the troublesome Cal. In an effort to win his father’s love, Cal purchases a fresh lettuce crop to replace the ruined beans that threatened to bankrupt his family. But Adam rejects the gift.” (Library Catalogue)

Rebel without a cause (DVD)
“Jim Stark, the teenage son of a well-to-do family, is overcome by loneliness, frustration and anger, which leads to violence when he seeks approval of a gang of high-school hoodlums.” (Library Catalogue)