Welcome to July. We’re well and truly into winter now! Just as well there’s lots of new books for you to peruse and enjoy in this month’s newsletter. And you know the drill – if they’re not on shelf at the library you can reserve them. 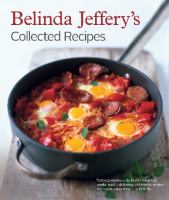 Belinda Jeffery’s Collected Recipes / photography by Rodney Weidland.
“Belinda Jeffery brings together two of her best-loved books, 100 Favourite Recipes and Tried-and-True Recipes, to create a one-stop collection of more than 200 recipes, every one of them mouth-wateringly good. Filled with wonderful, family-friendly dishes for all occasions, from easy midweek dinners and relaxed Sunday-night suppers to irresistible party nibbles, special desserts and sensational cakes, this is a book you’ll return to time and time again.” – (adapted from Syndetics summary)

An Everlasting Meal : Cooking with Economy and Grace / Tamar Adler.An Everlasting Meal: Cooking with Economy and Grace
“Adler teaches how to cook well regardless of circumstance, offering a practical, pleasurable path to the kitchen. She shares what chefs instinctively know: each ingredient they buy, chop, and cook ought to be prepared with a keen eye toward future meals. “An Everlasting Meal” will make life easier and more enjoyable, keeping the stove and refrigerator, and heart and table, full of nourishment and pleasure. 304 pp. 25,000 print.” – (adapted from Syndetics summary)

Slaying the Badger : LeMond, Hinault and the Greatest Ever Tour de France / Richard Moore.
“The Tour de France is sport’s most compelling battle — an annual cauldron of heroism and treachery, spectacle and controversy, mind-games and endurance. But the 1986 Tour stands out as the year in which a show-stopping rivalry had spectators across the world gripped. When Greg LeMond …..dubbed ‘L’American’ — won the 1986 Tour, he made history. The first non-European to win the Yellow Jersey, he broke the Old World stranglehold and changed the face of the competition. But LeMond’s victory was hard won. It was seemingly snatched from the jaws of the man ominously dubbed ‘The Badger’…” – (adapted from Syndetics summary) 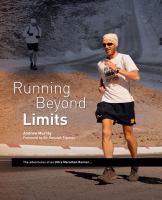 Running Beyond Limits : The Adventures of an Ultra Marathon Runner– / Andrew Murray.
“Andrew Murray has been running since 2005 when he realised that it might be a good way to see a bit of the world. Since then he has been placed first overall in races in the Arctic, the Sahara, Outer Mongolia and the jungle, amongst others. But in 2010 he devised a challenge that put all his previous attempts in the shade – to run from Scotland to the Sahara in one continuous push with no rest days!….This book is the story of that run…” – (adapted from Syndetics summary)

Into the Silence : The Great War, Mallory, and the Conquest of Everest / Wade Davis.
“In a monumental work of history and adventure, ten years in the writing, Wade Davis asks not whether George Mallory was the first to reach the summit of Everest, but rather why he kept on climbing on that fateful day. His answer lies in a single phrase uttered by one of the survivors as they retreated from the mountain: ‘The price of life is death.’ Mallory walked on because for him, as for all of his generation, death was but ‘a frail barrier that men crossed, smiling and gallant, every day’.” – (adapted from Syndetics summary)

Toxic charity : how churches and charities hurt those they help (and how to reverse it), by Robert D. Lupton.
Although we contribute money, and many volunteer hours to support needs here and abroad it appears to be a bottomless pit. Why are the same people trapped in cycles of unemployment, and poverty? Lupton, with many years of experience in urban renewal, argues that “when relief does not transition to development in a timely way, compassion becomes toxic. …He chronicles examples of good intentions gone awry and examines charitable activities that are resulting in transformative outcomes. … A must-read book for those who give to help others. (drawn from Booklist review, courtesy of Syndetics)

The Holy Spirit in the world today, edited by Jane Williams.
“In recent decades, churches across the world have been rediscovering the dynamic power and deep wisdom of the Holy Spirit. Alongside the experience of the Spirit many theologians have begun to explore the theology of the Spirit and in 2010 a major conference took place at Holy Trinity Brompton on this very topic. This book is a collection of twelve papers delivered at this conference, and includes contributions from Jurgenn Moltman, Miroslav Volf, David Ford and Rowan Williams” (drawn from the publisher)

On being : a scientist’s exploration of the great questions of existence, by Peter Atkins.
“Peter Atkins is the shining exception to the rule that scientists make poor writers. A Fellow at Oxford and a leading chemist, he has won admiration for his precise, lucid, and yet rigorous explanations of science. Now he turns to the greatest–and most controversial–questions of human existence. Can the scientific method tell us anything of value about birth, death, the origin of reality–and its end? Are these questions best left to faith? Atkins makes a provocative contribution to the great debate between religion and science. …He explores breathtaking questions–asking the purpose of the universe–with wit and learning, touching on Sanskrit scriptures and John Updike along the way….” — www.amazon.com

Fat, fate, and disease : why exercise and diet are not enough / Peter Gluckman and Mark Hanson.
“‘Why are we losing the war against obesity and chronic disease?’ This is the simple question Peter Gluckman and Mark Hanson ask, exploring the dominant myth that the exploding epidemic of obesity, heart disease, and diabetes can be tackled by focusing on adult life styles. Addressing the flawed approach of the weight-loss industry, they explain why a continued focus simply on diet and exercise will fail. Highlighting the implications of the growing burden of these problems in the developing world, they show that the scientific enterprise ignores the reality of the social, cultural, and biological determinants that make different populations and people respond differently to living in the modern nutritionally rich world…” – (adapted from Book Cover description)

Dosed : the medication generation grows up / Kaitlin Bell Barnett.
“Over the last two decades, we have seen a dramatic spike in young people taking psychiatric medication. As new drugs have come on the market and diagnoses have proliferated, prescriptions have increased many times over. The issue has sparked heated debates, with most arguments breaking down into predictable pro-med advocacy or anti-med jeremiads. Yet, we’ve heard little from the “medicated kids” themselves. In Dosed, Kaitlin Bell Barnett, who began taking antidepressants as a teenager, takes a nuanced look at the issue as she weaves together stories from members of this “medication generation,” exploring how drugs informed their experiences at home, in school, and with the mental health professions.” – (adapted from Book Cover description)

Think like a pancreas : a practical guide to managing diabetes with insulin / Gary Scheiner.
“Writing for insulin-dependent diabetics, certified diabetes educator and exercise physiologist Scheiner covers the knowledge and actions needed to control blood glucose levels successfully: an understanding of insulin types, proper use of equipment, coordination with the healthcare team,diet and exercise, and a positive attitude. As a Type 1 diabetic, he relates his own difficult experience of adapting his lifestyle and regulating his blood sugar with the less advanced knowledge and technologies of 1986. He then discusses improvements in equipment and medications that have made tighter control possible, emphasizing the long-term benefits of quality disease management…” – (adapted from Library Journal summary)

It’s your thoughts that count : how to use your thoughts to transform your life / by Wendy Betteridge.
“”Your thoughts that count” is a voyage through Wendy’s many training experiences. It brings together the best of what she’s learned as she has taught and trained others. Her book provides great skills for leaders and managers, confidence and certainty for sportsmen and women, comfort and solutions for those who are depressed or whose self esteem is low, techniques for children and young adults who are studying, and great communication skills for everyone. It provides the tools for seeking out personal values, for avoiding procrastination, for setting goals and committing to make them a reality.” (Global Books in Print)

Never too late to be great : the power of thinking long / Tom Butler-Bowden.
“It is rarely too late to begin the journey of being or doing something remarkable. ‘Never Too Late to be Great’ is about the power of thinking long. Drawing on wide research into ‘lead time’ and the ‘ten-year’ rule, personal development authority Tom Butler-Bowdon shows that, contrary to popular belief, people, companies, products and ideas invariably need time to realise their potential. And how, when we give ourselves slightly longer timeframes, anything is possible. At the age you are now, many famous and remarkable people were only just getting into their stride. Given longer lifespans, it is likely that you have more time than you think to achieve your goals. This book will show you why, in all probability, your best is yet to come.” (Book cover)

The wisdom of my grandmothers : lessons to live by, from one generation of remarkable women to the next / Adriana Trigiani.
“Adriana Trigiani’s two remarkable grandmothers, Lucia and Viola, lived through the twentieth century from beginning to end as working women who juggled careers and motherhood. From the factory line to the family table, the two of them – the very definition of modern women – cut a path for their granddaughter by demonstrating courage and skill in their fearless approach to life, love and overcoming obstacles. Trigiani visits the past to seek answers to the essential questions that define the challenges women face today: how we hold on to the values that make life rich and beautiful, how we can take risks and reap the rewards and how to stand resilient in the face of tragedy.” (Book cover)