These books are lovely to read and relish, with delightful illustrations that will charm and amuse the whole family. Have a browse!

Gem / Holly Hobbie.
“Two letters-from grandmother to granddaughter and vice versa frame this otherwise wordless story of a toad named Gem. Over a spread of a New England cottage in the midst of a snowstorm, a letter from “Gram” to her granddaughter Hope explains the book’s genesis: the girl’s discovery of a toad the previous spring (“I wanted to tell the story of Gem’s spring journey – all the way to my garden”). At the end, a thank-you note from Hope reveals her as a thoughtful, strong-spirited child (“Toads are not pets,” she writes, explaining why she let Gem go. “They want to be free, like everything does”).” (Publisher Weekly) 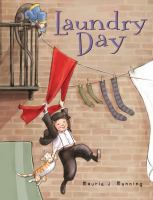 Laundry day / by Maurie J. Manning.
“A shoeshine boy is surprised when a piece of red silk falls from the sky. Trying to find its owner, he ventures up and down fire escapes, back and forth across clotheslines, and into the company of the colorfully diverse people who live in the tenement.” (Syndetics summary) 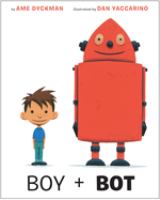 Boy + Bot / by Ame Dyckman ; illustrated by Dan Yaccarino.
“Imaginative and sweet-natured, Dyckman’s picture-book debut centers on the relationship between a boy and a robot, whose mutual generosity embodies the very best that friendship has to offer. Scruffy haired Boy and red, bullet-shaped Bot hit it off immediately after they meet in the forest. But when a rock accidentally turns off Bot’s power switch, Boy jumps into caregiver mode, taking Bot home, feeding him applesauce, reading him a story, and tucking him in for the night. And when Bot is inadvertently reactivated and finds Boy asleep, he reciprocates the only way he knows how, giving Boy oil, reading him an instruction manual, and bringing him a spare battery. Yaccarino’s (All the Way to America) brightly colored gouache illustrations and chunky characterizations are filled with affection and create a warm and cheery environment from first page to last.” (Publisher Weekly) 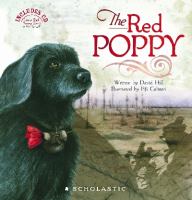 The red poppy / written by David Hill ; illustrated by Fifi Colston
“Jim, a soldier on the Western Front in World War 1, is wounded while charging through No Man’s Land. He stumbles into a shell crater for shelter and finds a badly wounded German soldier. The two men try to help each other, but it’s Nipper, the messenger dog, whose gallantry gives them a chance for survival. A sophisticated picture book. Suggested level: primary, intermediate.” (Syndetics summary) 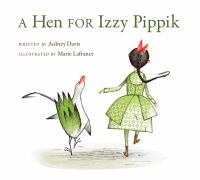 A hen for Izzy Pippik / written by Aubrey Davis ; illustrated by Marie Lafrance.
“When Shaina finds a magnificent hen, she knows that Izzy Pippik, the hen’s owner, is sure to return for her. In the meantime, Shaina decides she will care for the animal. But when dozens of eggs hatch and rowdy chickens scatter throughout the village, Shaina must fight the entire town if she has any hope of protecting the birds. Inspired by Jewish and Islamic traditional texts, this is a beautiful tale about doing the right thing, even in the face of adversity.” (Syndetics summary)