The New Zealand International Arts Festival is currently on here in Wellington with many famous writers speaking at the events.

Germaine Greer, author of The Female Eunuch, and Shakespeare’s Wife, and more, is speaking at three of these events.

Wellington City Libraries has many interesting books by Germaine Greer you may wish to read or reserve.

The obstacle race : the fortunes of women painters and their work / by Germaine Greer.
“If men and women are equally capable of genius, why have there been no female artists of the stature of Leonardo, Titian or Poussin? In seeking to answer this question, Germaine Greer introduces us to major but underestimated figures in the history of Western painting–Angelica Kauffmann, Natalia Goncharova, Suzanne Valadon, Berthe Morisot, Kathe Kollwitz–and produces a brilliantly incisive and richly illustrated study. She explains the obstacles as both external and surmountable and internal and insurmountable in the race for achievement.” – (Syndetics summary)

Shakespeare’s wife / Germaine Greer.Shakespeare’s Wife
“In 1979, noted feminist Greer wrote The Obstacle Race: The Fortunes of Women Painters and Their Work, which helped save several women artists from obscurity. Now she turns her attention to another shadowy figure, Ann Hathaway. Greer wants to rescue Hathaway from the frantic fantasising of the bardolators, who would have us believe that Shakespeare left Stratford for London in order to escape an unhappy marriage. Maybe, and since the cupboard is so bare of facts, Greer can do no more than speculate herself. But her speculation is based on careful sifting through every shard of contextual evidence archives, records, registers, and literary works not just as it relates to the Shakespeares and the Hathaways but also as it relates to their place and time. What we get is a portrait of life in Stratford circa 1600 on almost every level and in every aspect the practice of medicine, the brewing of ale, birth, marriage, and burial. Although Ann herself remains in the shadows, Greer provides an intriguing analysis that helps us understand more about the person Ann might have been. Reader interest probably will be based more on the author’s name than on the subject.” – (Booklist Summary) 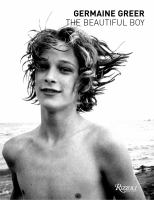 The beautiful boy / Germaine Greer.
“The beauty of male imagery as an object of female desire has been repressed, argues feminist writer Greer in this work of art history. She includes some 200 images from Western art in her exploration of the shifting meanings and presentations of masculinity.” – (Book News summary).

The female eunuch / Germaine Greer.
“A worldwide bestseller, translated into over twelve languages, THE FEMALE EUNUCH is a landmark in the history of the women’s movement. Drawing liberally from history, literature and popular culture, past and present, Germaine Greer’s searing examination of women’s oppression is at once an important social commentary and a passionately argued masterpiece of polemic. Probably the most famous, most widely read book on feminism ever.” – (Summary from Amazon.co.uk)

Whitefella jump up : the shortest way to nationhood / Germaine Greer.
“Essay exploring the interdependence of black and white Australia to suggest that embracing Aboriginality is the only way Australia can fully imagine itself as a nation. Argues that Australia needs to enter the Aboriginal web of dreams. Includes correspondence by Tim Duncan, Evan Thornley, John Quiggen, Graham Jones, Gideon Haigh and Tim Flannery. Author is Professor of English and Comparative Studies at the University of Warwick. Her previous titles include ‘The Female Eunuch’ and ‘The Whole Woman’.” – (Syndetics summary)

The Change : women, ageing and the menopause.
“Challenges the medical, religious and social myths surrounding menopause. The author argues that acceptance and understanding of this critical life stage will lead to serenity and female empowerment. By the Australian-born author of TThe Female Eunuch’, it includes an index and a bibliography.” – (Syndetics summary)

Daddy, we hardly knew you / by Germaine Greer.
“Driven to know if the father who returned from World War II a cold and vacant man had loved her once, feminist Greer ( The Female Eunuch, LJ 4/15/71) follows a trail of false leads and outright lies to know the truth about the man who called himself Reg Greer. To the dismay of her sharp-tongued, eccentric mother, but to the pleasure of herself and her siblings, she finds someone who, concealing his origins in poverty and illegitimacy, rises to middle-class security on the strength of his own wit and resourcefulness. Some of the writing is marred by Greer’s fascination with the minutiae of herself, but the search and its results are intriguing.” – (Library Journal Summary)

The whole woman / Germaine Greer.
“Germaine Greer proclaims that the time has come to get angry again! Modern feminism has become the victim of unenlightened complacency, and what started out in the Sixties as a movement for liberation has become one that has sought and settled for equality. With fiery rhetoric, authoritative insight, outrageous humour and broad-ranging debate, Greer shows that, although women have indeed come a very long way in the last thirty years, the notion of our having it all has disguised the persistent discrimination and exploitation that continues to exist for women in the basic areas of health, sex, politics, economics and marketing. Erudite, eccentric, provocative and invigorating, Germaine Greer once again sets the agenda for the future of feminism. Here is all the polemical power that sold over a million copies of The Female Eunuch and kept its author at the heart of controversy ever since. The Whole Woman was a No. 1 Sunday Times bestseller for five weeks when it was first published in 1999, and was hailed by the critics as a ‘polemical bomb’ (Guardian) and as required reading for thinking adults everywhere.” – (Global Books Summary)

Slip-shod sibyls : recognition, rejection and the woman poet / Germaine Greer.
“The term “slip-shod sibyls”, adapted from a gibe of Alexander Pope, encapsulates the common contempt for the half-educated women who dared to expose themselves in the pre-1900 literary market-place. In this collection, Germaine Greer argues that the problem is not that such women were ignored but that, when most women were unable to express themselves in written form at all, and only a tiny minority dared to write in metre, the female poet was given undue attention, flattered and exploited only to be rejected and humiliated in her own lifetime and forgotten by posterity. She argues that what has come down to us is largely unworthy of inclusion in the canon. In many cases, the texts are inauthentic and cannot be relied upon to represent women’s work or women’s sensibility. As much of the poetry is intensely derivative, it cannot be evaluated by readers unfamiliar with the poets’ models. This study examines the life and work of an extraordinary group of women – from the myth of Sappho to the dishonesty of Katherine Philips, the enduring mysteries of Aphra Behn and the tragic tale of Letitia Landon, forced to masquerade as “The Child of Song”.” – (Amazon.com summary).

Other books that Wellington City Libraries have by Germaine Greer:

Sex and destiny : the politics of human fertility / Germaine Greer.