New Zealanders are the first in the world to mark this day with a service at Makara cemetery followed by a function at Parliament. Six million Jews perished amongst them many children. Never forget.

It is a day I  remember observing in my native country the Netherlands. At the start of WWII 144000 Jews lived in the Netherlands and only 32.000 survived.  My mother was only a child during the war years but she often spoke about the horrors of seeing neighbours being deported or wondering what happened to some of her school friends.

Some books which may be of interest: 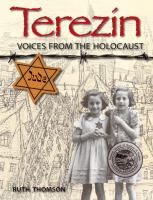 Terezín : voices from the Holocaust / Ruth Thomson.
“Through inmates’ own voices–from secret diary entries and artwork to excerpts from memoirs and recordings narrated after the war–“Terezin” explores the lives of Jewish people in one of the most infamous of the Nazi transit camps.” (Syndetics)

The diary of a young girl / Anne Frank ; edited by Otto H. Frank and Mirjam Pressler ; translated by Susan Massotty.
“Anne Frank was 13 years old when she and her family went into hiding in a secret room in Amsterdam in order to escape the Nazi occupation of the Netherlands. For two years they hid and Anne wrote her diary, providing us with a moving account of a Jewish life in hiding.” (Library Catalogue)

The violinist : Clare Galambos Winter, Holocaust survivor / Sarah Gaitanos.
“Klara Galambos was a twenty-year-old violin student in Budapest in March 1944. Arrested and thrown into jail in the first days after the German occupation, she later managed to get home to Szombathely, was in the ghetto there and transported with the Jews of Szombathely to Auschwitz Birkenau. After five weeks she and her aunt were among the thousand Hungarian women selected for slave labour at Allendorf. They returned to Hungary after the war, and in 1948 they both left Hungary for New Zealand, where Clare joined the fledgling national orchestra. As a long-serving member of the NZSO, she made a significant contribution to the musical life of this country, and is now retired in Wellington. The Violinist draws on memoir, interviews and historical research to tell a compelling story.” (Global Books)

Night / Elie Wiesel ; translated from the French by Marion Wiesel ; [with a new preface by the author ; foreword by François Mauriac].
“Wiesel’s account of his survival as a teenager in the Nazi death camps, including a new preface is which he reflects on the enduring importance of Night and his lifelong, passionate dedication to ensuring that the world never forgets man’s capacity for inhumanity to man.” (Syndetics summary)